From 1962, Peace Corps Volunteer Jim Bausch writes: "On the Job in East Pakistan" 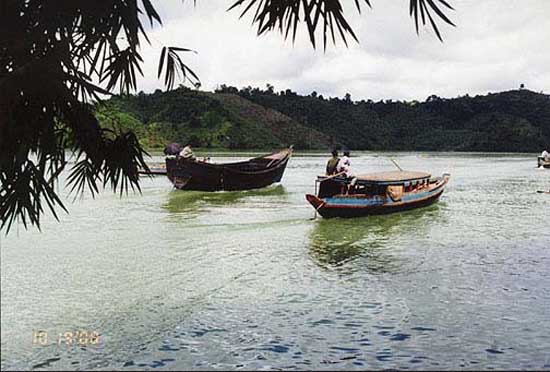 "The people are curious, friendly, smiling, singing, wanting to share, eager to learn, willing to teach, and extremely tolerant of our ignorance of their culture. The land is lush, green, flat, beautiful, serene, moving with the breeze in a single sweep, tall rice paddies bending as one stalk, cocoanut palms towering over all, olive banyan trees dropping new roots, bright sun glancing from the many ponds, and everything surveyed by white clouds in a blue sky that seems curiously low when the stars appear. Among such a people and such a land, the PCV's have settled down to live and work."

From 1962, Peace Corps Volunteer Jim Bausch writes: "On the Job in East Pakistan"

On the Job in East Pakistan by Jim Bausch

Seven weeks after our arrival in East Pakistan, we had completed our training and were ready to move to our jobs.

One group, considered the lucky ones by the rest of us at the time, remained in Comilla to work at the Academy. There, the engineers, youth workers, librarian, mechanic, farmer and photographer all have their work cut out for them. The eight-hour day and five-day week are luxuries not yet available at the Academy, but the Satisfactions that come from seeing the fruits of hard work are plentiful.

In Dacca, the physical education teachers just about got their program into full swing when the university dosed for Rarnzan. They're now en route to Comilla to help in setting up youth groups until the university re-opens. One of the engineers who is teaching at the polytechnical school has moved from the Peace Corps house to the school's hostel and is managing to keep moving at least 12 hours a day. The audio-visual team at Dacca hasn't been sleeping either; One member went on a scientific expedition to St. Martin's Island in the Bay of Bengal recently, while the other set up a display of audio-visual techniques at the East Pakistan Education Week Exhibition.

In Rajshahi, the teachers were managing to keep busy with their classes, planning for new courses and expanding the curricula of departments, a time-consuming and difficult task. One of the engineers is becoming proficient in Bengali, since he's using it rather than English as the medium of instruction. Another engineer has just taken on the position of District Engineer of Rajshahi. At the Medical College Hospital, one of the girls is setting up a medical records section as well as assisting in the operating. Another nurse has persuaded her colleagues to sterilize the needles between injections and has established a system of medicine charts to facilitate dispensation of drugs.

In Mirpur, the two mechanics have just received a large mobile workshop from the Government of East Pakistan, and are kept busy maintaining the equipment of the refugee satellite towns of Mirpur and Mohameddpur. The carpenters are introducing pre-built doors and window-frames that can be assembled at one place and then brought to the house building areas. Formerly, each window and door was built separately as each house was built, making standardization practically impossible. The mason has been experimenting with a new brick-making machine, bamboo-reinforced concrete walls, and is now starting his second building where he gives on-the-job training to new masons. The Mirpur group recently lost one of its members when the town planner moved to become District Engineer of Pabna. The sociologist is preparing a census-sociological-medical survey which will be used in evaluating the populations of refugee towns.

The mason, by the way, had an experience that we won't let him forget for a while. He saw some other masons and hod-carriers busily working and thought he would give them a hand. He hopped over the wall that separated them from the street and began to help them, talking in Bengali-English the whole time. Only after a few minutes did he notice that all the men were wearing leg-shackles and chains. We had never heard of anyone before jumping over a prison wall to get on the inside.

The Mirpur group has had one particularly interesting, rewarding and unforeseen experience. On December 31, the sociologist put a Band Aid on the cut finger of a carpenter who worked in the area. As you can imagine, a good sized clinic has grown from that. Now the Volunteers hold clinic hours twice each day, and the Peace Corps physician comes twice a week for serious cases.

The mason is becoming a proficient lab technician in his spare time, the mechanic is learning enough first aid to be an excellent medic, the carpenter is finding out more and more about diseases that he never before knew existed, and the sociologist has so far given over fifty injections and is going out of his mind trying to keep medical records, (this is all the more complicated by the fact that so many of the patients have identical Moslem names). From the one or two patients a day that were coming in the beginning of January, the clinic on February 11 had 67 cases of fungus, systemic infections, worms, cut hands and feet, and countless other maladies. The Volunteers dosed the clinic on that day after the last patient went home at a few minutes after midnight.

The Mirpur group found a block to effective communication waiting for them when they came to Mirpur in the form of a large government-furnished house that stuck out like the proverbial sore thumb from the surrounding refugee quarters. The house is now referred to as "The American Hospital", and the stigma that was once attached to it is gone. The clinic has been good for the Pakistani people' since all other forms of medical care in that area were non-existent. It has been good for the Peace Corps since it has broken down the barriers between the Volunteers and the local population. And it has been good for the Volunteers for both of these reasons as well as for the satisfaction that they get from seeing the effectiveness of proper medication in an amazingly short period of time.

The people are curious, friendly, smiling, singing, wanting to share, eager to learn, willing to teach, and extremely tolerant of our ignorance of their culture. The land is lush, green, flat, beautiful, serene, moving with the breeze in a single sweep, tall rice paddies bending as one stalk, cocoanut palms towering over all, olive banyan trees dropping new roots, bright sun glancing from the many ponds, and everything surveyed by white clouds in a blue sky that seems curiously low when the stars appear. Among such a people and such a land, the PCV's have settled down to live and work.

This story has been posted in the following forums: : Headlines; PCV Magazine - April, 1962; COS - Bangladesh; History