Peru RPCV Vicki Huddleston is Top US Diplomat in Cuba 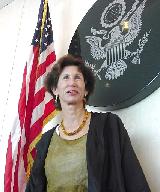 Read and comment on this story from CNN on American Diplomat and Peru RPCV Vicki Huddleston who is the highest ranking US diplomat in Cuba at:

Peru RPCV Vicki Huddleston is Top US Diplomat in Cuba*


Peru RPCV Vicki Huddleston is Top US Diplomat in Cuba

Vicki Huddleston, was on CNN last Saturday morning. She is the highest ranking US diplomat in Cuba. There was a long and interesting interview by Kate Snow in Havana with her on the CNN Saturday Edition show.

Vicki mentioned that Jimmy Carter was coming to town to visit with Fidel. Also, Vicki is passing out free short wave radios to random Cuban people that she meets in the countryside. The government thinks that these radios just have one US propaganda station, but she spun the dial to prove you could tune in anything.

In September 1999, Ambassador Vicki Huddleston, a career Foreign Service Officer, became Principal Officer at the United States Interests Section (USINT), Havana, Cuba. Over the past two years, she has been Deputy Assistant Secretary for African Affairs with responsibility for West and Francophone Central Africa. She was United States Ambassador to the Republic of Madagascar from 1995-1997.

Ambassador Huddleston was Deputy Chief of Mission in Port-au-Prince from 1993-1995 during the deployment of the Multinational Force to Haiti. She was Deputy and then Coordinator of the State Department's Office of Cuban Affairs from 1989-1993.

Earlier in her career, she was chief of the Economic Sections in Sierra Leone and in Mali. She has worked in the Bureau of International Organization Affairs, the Office of Mexican Affairs, and as Country Desk Officer for Bolivia. In 1988-1989, while working for Senator Jeff Bingaman of New Mexico as an American Political Science Association Congressional Fellow, she drafted the Missile Technology Control Regime (MTCR) legislation which became law in 1990. Prior to entering the Foreign Service, she worked in Peru and Brazil for the American Institute for Free Labor Development. As a Peace Corps Volunteer in Peru, she organized the financing for the two housing cooperatives in Arequipa.

Ambassador Huddleston has received four Superior Honor Awards and two Meritorious Honor Awards. In 1994-1995, she shared with members of the U.S. Embassy in Haiti the Distinguished Service Award and the Award for Valor. Her husband Robert is a retired Foreign Service Officer. Arizona is her home state.

Read this additional story on her from the Dallas Morning News at:

Our woman in Havana doesn't stand on timidity

Our woman in Havana doesn't stand on timidity

Diplomat supports opposition, which she calls the future

HAVANA – She's the top U.S. diplomat in Cuba. A major player. But there was a time, some people joke, when even her dog, a prize-winning Afghan, was getting more headlines.

Now, though, Vicki Huddleston is firmly in the spotlight, speaking out more than ever and telling people how to bring democracy to Cuba.

"Empower the people," she said, "because the transition has begun. We've got to learn how to deal with a country in transition."

Cuban officials sharply disagree. They say their socialist government is strong, and they resent what they see as U.S. meddling in their affairs.

It's a timely debate. The Bush administration's new point man on Cuba, Otto Reich, just ordered one of the most far-reaching reviews of U.S.-Cuba policy in years. And one of his key sources is Ms. Huddleston, chief of the U.S. mission in Cuba since September 1999.

Ms. Huddleston, a career Foreign Service officer, said she has no idea what the policy review will conclude when it comes out in the next few weeks. But her views are clear: Cuba is changing. More and more Cubans are challenging their government. And the international community should support them.

"Diplomats, journalists ... we've all been too timid," she said.

Some exiles in Miami accused the Clinton administration of having a vague, inconsistent policy toward Cuba. Bush officials have promised to be proactive.

As Ms. Huddleston sees it, there is now a "critical mass" of opposition to the socialist government and it's gaining momentum. She recalled that when she began monitoring Cuban affairs at the State Department in 1989, dissidents were few and were "really tightly controlled."

Government supporters sometimes threw rocks at them, she said, and even stuffed poems into the mouth of a poet who opposed the regime.

By 1999, she said, the opposition had grown and diversified. New groups of independent journalists, human rights activists, farmers, librarians and doctors had sprung up and gained support.

"What I see is a fundamental difference," she said. "Before, the opposition was a relatively small minority that didn't speak for the Cuban people. Now I think they do."

Cuban officials say the dissidents are small in number and do not represent the people. Support for the revolution, they say, can be seen in the huge pro-government parades – sometimes more than a million strong – that stream along the Malecón and past Ms. Huddleston's office at the U.S. Interests Section.

Such marches were frequent during the fight over Elián Gonzalez, the Cuban boy found clinging to a raft off Florida's coast in November 1999. His mother had died during the voyage, and his Florida relatives demanded custody. His father in Cuba wanted Elián back, and the boy was returned in June 2000.

Ms. Huddleston sometimes watched the Elián protests from a balcony at the Interests Section.

She could hardly miss them.

Not long after the Elián saga began, Cuban President Fidel Castro ordered workers to build a sprawling outdoor theater directly in front of the U.S. compound. Named after one of Cuba's founding fathers, it's called the José Martí Anti-Imperialist Tribunal.

After the furor over Elián died down, Ms. Huddleston turned to one of her main projects: to reach out to Cubans who want to change the system and give them, as she calls it, "moral support."

That means meeting with dissidents, farmers, artists and others, she said, giving them hope, telling them not to be afraid.

"Life can be a lot better here," she said. "Life in the future is not to be feared, but welcomed."

Cuban officials contend that the dissidents are "manufactured" – and paid – by the U.S. government, a claim the Americans deny.

In any case, some Cubans have resented Ms. Huddleston's contact with the opposition. And that got her in the doghouse in January 2001.

A Cuban kennel club sent her a letter, telling her that she and her award-winning Afghan, aptly named Havana, had been "dishonorably discharged."

Amalia Castro, president of Cuba's National Association of Afghan Hounds, said she was "morally obligated" to expel the two. Ms. Castro, no relation to the Cuban president, also lashed out at Ms. Huddleston for inviting "counterrevolutionaries" to lunch.

Television networks and newspapers across the United States picked up the story. Embarrassed, the kennel club sent Ms. Huddleston another letter, saying that she was unwelcome, but that her pooch could participate in shows.

Ms. Huddleston still laughs about it.

She's popular among foreign diplomats and often hosts receptions at her official residence, an opulent estate surrounded by palm trees. The scene, with butlers striding across polished stone floors, is formal.

But Ms. Huddleston, an Arizona native and former Peace Corps volunteer, is not.

Most people call her by her first name.

Even some critics say they can't help liking her.

U.S. policy toward Cuba "hurts the Cuban people while doing nothing to bring improvements in democracy or political rights," said Geoff Thale, a senior associate at the Washington Office on Latin America, a private research group.

"Having said that, my experience with Ambassador Huddleston has been positive. She has been open and receptive to those who disagree with her."

Ms. Huddleston is scheduled to leave Cuba in September for a new assignment. Until then, she said, she'll continue reaching out to the Cuban opposition: "It's important that people not think that they are alone out there."

This story has been posted in the following forums: : Headlines; RPCVs in the news; COS - Peru

CNN's article was nice, but the The Dallas Morning News story was really worth reading. Good for Vicki, she's not only a courageous woman, her views...on a changeing Cuba and her plea for the international community to support Cubans who are challenging their socialist government...are right on. It is good to see that there may be hope for a free Cuba after all.