PROMOTE, or ACHIEVE? - A BILL to amend the Peace Corps Act 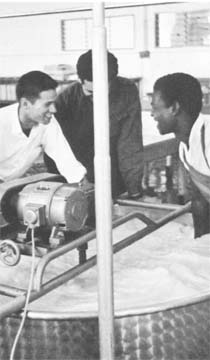 Note that the author of this op-ed piece has been an outspoken critic of the language in the USA Patriot Act and the Executive Order which created the USA Freedom Corps and has written about them extensively in previous pieces for PCOL.

Note also that Sam Farr, in his interview recognized that the arguments that Mr. Gallagher previously presented were correct and that there is an issue of Peace Corps independence from the intelligence gathering community that will be addressed in the new Peace Corps legislation.

PROMOTE, or ACHIEVE? - A BILL to amend the Peace Corps Act.*


PROMOTE, or ACHIEVE? - A BILL to amend the Peace Corps Act.

It’s apparent Congressmen Farr and Udall and Senator Dodd have gone into the huddle and put their heads together. A piece of proposed legislation, the “Peace Corps Charter for the 21st Century,” has come out that holds significant promise of providing clarification and enhancement of Peace Corps’ mission, with enough inherent flexibility for bipartisan support. The question is, does the bill hold water in terms of truly protecting Peace Corps in a post-September 11 climate?

The general purpose stated at the head of the bill appears to be good: “to promote global acceptance of the principles of international peace...” However, it seems like “promote” is not enough. It should state “promote and achieve,” and the word “global” should be erased.

It is understood that Peace Corps is international, and due to the circumstances of geopolitical situations, Peace Corps can never be truly global. However, if we “promote and achieve acceptance of principles of international peace” here in the United States, our efforts abroad will be much more effective, and in the long run would be global in scope.


SHOULD, or SHALL? - Analysis of Finding 6 (Independence, Intelligence Agencies).

“...no Peace Corps personnel or volunteers should have any relationship with any United States intelligence agency or be used to accomplish any other goal other than the goals established by the Peace Corps Act.” (Finding (6), Line 20)

The word “should” does not create a clear nexus for requirement and as such does not express a legislative mandate. Nonetheless, this is intended as a finding, which must be followed by a section-specific resolution later in the document if a nexus is to be created. No such resolution is found in the discussion draft.

There are two choices a legislative analyst who wishes to create effective legislation has in regard to Finding (6) : to express legislative intent to protect Peace Corps from incursions by intelligence agencies, or to create a legislative mandate to do the same.

If legislative intent is the option chosen, there will not be a clear legal mandate, and the best that could be accomplished is to change “shoulds” to “shalls,” as follows:

“...no Peace Corps personnel or volunteers shall..”

If a legislative mandate is what is desired, further changes must be made, to tie finding (6) to Section 5 (Peace Corps Independence) and create a nexus for requirements. The finding would thus be amended to read, simply: “The Peace Corps is an independent agency.”

The rest of the draft text of finding (6) [lines 21-25] would be moved to Section 5 and preceded by the words, “Resolved that,” excluding “and therefore,” and changing “should” to “shall.” The last line (line 25) could in this scenario be amended to read: “nor shall any persons associated with any intelligence agency or action avail themselves of information originating from Peace Corps or from activities of Peace Corps Volunteers. No information originating from Peace Corps activities shall be taken as intelligence for the purposes of any intelligence agency or action.” Alternatively, line 25 would not not be amended, and lines 21-25 could be moved to Section 5, creating a nexus for requirement using the same language shown in the draft.

(Exception: Such information is provided by Peace Corps as evidence of a crime, or threat of death or serious bodily harm to any person.)


FOR WANT OF DEFINITION

Being clear about definitions in the proposed legislation is particularly important, especially since the Freedom Corps Executive Order does not define “relevant information.” The current draft legislation doesn’t have a definition, either. Below I’ve shown a proposed definition, which excludes information which would fall under standard definitions of foreign intelligence used by U.S. agencies, while including all other information.

Section 3 (Definitions): "For the purposes of this Act, “Relevant information” of Section 3(f)(iii) of E.O. 13254 shall not include information from Peace Corps which relates to the capabilities, intentions, and activities of foreign powers, organizations, or persons, where such information will become foreign intelligence.”

The period at the end of finding (9) should replaced by this text: “where invited.”

Many Returned Peace Corps Volunteers have made the important point that willingness of country governments and communities is as critical to the sustained success of the Peace Corps mission goals, if not more so, than language directed at seperation of Peace Corps from intelligence activity.

Some excellent suggestions have already been made on this subject -- a few are shown here which could be useful as legislative language:

“...(T)hat volunteers continue to be assigned only to positions in which trust can be built based on open communications.” (Steve Manning)

“That Peace Corps volunteers continue to only be placed in nations which request them.” (Mark Karaczun)

Hopefully, more RPCVs will post their thoughts to this page -- but more importantly, make your voice heard in the offices of the elected representatives working on this bill. After all, there’s no democracy without participation... how did that Franklin quote go again?

“Those who would give up essential Liberty, to purchase a little temporary safety, deserve neither Liberty nor safety.”

Before the following comment the author would like to state that it isn't the objective of this article to take the wind out of the sails of the legislative effort, or to discourage RPCVs, legislative analysts, and Congresspersons. Quite the contrary: it is hoped that the ongoing commentary and criticism will serve to strengthen the legislation which we are building, and to encourage a democratic participation in what is undoubtedly a historic moment for Peace Corps.

Under "Eligibility for Grants" in the discussion draft, it is stated that "the stated purpose of the nonprofit corporation shall be to act solely as an intermediary between the Corporation for National and Community Service and individual Returned Peace Corps Volunteers seeking funding for projects consistent with the third and fourth goals of Peace Corps." Everybody who has done work with nonprofits knows where there is money, there is always an administrative cut. Where is the language limiting this administrative figure to a maximum percentage? Micheal Maren, a Kenya RPCV who has also worked for Catholic Relief Services and USAID, has given excessive documentation of abuses of the percentages in his book, "The Road To Hell: The Ravaging Effects of Foreign Aid and International Charity."

The next question flows from the first: Given the well-documented evidence of abuse of aid money, where is the firewall here to keep front organizations for intelligence agencies -- here or abroad -- from indirectly receiving the growing funds originally intended for the "third and fourth goals of Peace Corps?" Congressman Farr does well in stating that we don't want to "create a mini U.S. AID" with this funding.

These are items to consider seriously as the legislation is drafted, in addition to the very critical issue of the definition of "relevant information" mentioned above.


SOME PROPOSED CHANGES to the draft Peace Corps Charter, and their effect.

Line 4, page 1: might be better stated as “the Peace Corps Charter Act.”

Section 4 (Fourth Goal), line 12, should be amended to include the words “and achieve” after ‘promote.’

Section 5 (Peace Corps Independence): Lines 21-25 of finding (6) should be moved to Section 5 and preceded by the words, “Resolved that,” excluding “and therefore,” and changing “should” to “shall.”

The last line (line 25) could in this scenario be amended to read: “nor shall any persons associated with any intelligence agency or action avail themselves of information originating from Peace Corps or from activities of Peace Corps Volunteers. No information originating from Peace Corps activities shall be taken as intelligence for the purposes of any intelligence agency or action.” Alternatively, line 25 would not not be amended, and lines 21-25 could be moved to Section 5, creating a nexus for requirement using the same language shown in the draft.

Section 7(b), line 7, should be amended to include the words “or not” after ‘whether.’

This story has been posted in the following forums: : Headlines; Special Reports; Peace Corps - Congress

Thanks for the kind words. I think the Peace Corps legislation will be better for Colin Gallagher's efforts. I would just like to make one point concerning the above. The statement was made that "due to the circumstances of geopolitical situations, Peace Corps can never be truly global." "Never" is a tough word. One thread of thought from time to time has been merging Peace Corps - like organizations from other countries, such as Canada and Britain, with the Peace Corps or other entities doing similar things. Or for an international Peace Corps under the auspices of the United Nations. Is there any way to leave the door open for exploration of these possibilities in the future? Or is the Peace Corps really constrained to be unilateral in perpetuity? At least, the proposed legislation should not retard efforts toward greater inclusiveness when and if they become propitious in the future and do not conflict with existing goals. How about a provision that the new legislation does not preclude joint programs with comparable organizations from other countries, including the host countries themselves, when indicated on a case-by-case basis?