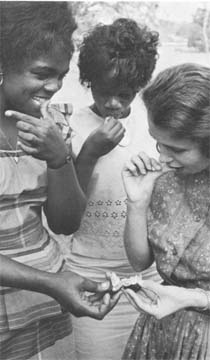 RPCVs should award the New Charter Peace Corps Act a High Risk/High Gain rating; High Risk because it moves the Peace Corps into political waters and High Gain because it may exploit well the talents and experiences of RPCVs.

The draft legislation for Peace Corps in the 21st century reflects forces afoot both before and after 9/11. Prior to 9/11, Nigerian RPCVs David Hibbard and Roger Landrum in conjunction with the National Peace Corps Association (NPCA) advocated an expansion of the role of returned peace corps volunteers. After 9/11, President Bush called for an expansion of the Peace Corps with particular attention to Muslin countries. Sargent Shriver, in a speech at Yale University, envisioned a fourth goal - a fleet of volunteers all over the world promoting democracy and peace. The proposed New Charter legislation reflects the influence of these ideas.

The Goals of the Peace Corps

This “New Charter” redefines the goals of the Peace Corps and adds a fourth. RPCVs are included and given an opportunity to seek funding for activities in pursuant of the third and new fourth goal. But, this Act would redefine the peace corps mission; in ways that may not be fully foreseen, but should certainly be questioned.

The Peace Corps becomes more political with the new statement of goals.

The Peace Corps Act of 1961 was straightforward in its aim - to promote world peace and friendship THROUGH the SERVICE of Americans abroad. The first and second goals, established then, have been rewritten. Then, the first goal read, ...”help the peoples of interested countries meet their needs for TRAINED MANPOWER.” Now, it reads...”help people in developing nations MEET BASIC NEEDS.” The original second goal was to “help promote a better UNDERSTANDING of the American PEOPLE on the part of people served.” The change now is significant as this goal reads..”to promote understanding of AMERICAN’S VALUES AND IDEALS ABROAD.”

The third goal, the one unique to RPCVs remains essentially the same: “to help promote a better understanding of other peoples by Americans.”

The fourth and newest goal is: To help promote GLOBAL ACCEPTANCE OF THE PRINCIPLES OF INTERNATIONAL PEACE AND NONVIOLENT COEXISTENCE AMONG PEOPLES OF DIVERSE CULTURES AND SYSTEMS OF GOVERNMENT.

The new 2nd goal reads like the mission statement for the United States Information Agency and this 4th goal sounds like the United Nations Charter.

The “principles of international peace” are conveniently not spelled out And just which “American values” are to be promoted and who decides? Are volunteers to promote such classic American values as separation of church and state in Muslim communities? There appears to be an inherent contradiction between the 2nd and 4th goals. Trying to resolve it could entangle Volunteers, staff, host country citizens as well as RPCVs in political controversy.

The strength of Peace Corps is its historic determination to put aside religious and political differences and work together with host country people in common purpose.

The strength of the RPCV community is its diversity and the multitude of ways in which the individuals have brought the world home. This legislation acknowledges the presence and importance of the RPCV community. It allows for the talents and experience of RPCVs to be utilitzed, but exactely how and to whose benefit is still not clear.

The Role of the NPCA

There is just one formal, national, membership organization within the Peace Corps Community. That is the National Peace Corps Association, whose membership is broad based, including many non Volunteers and only about 10% of the RPCV population. Proponents of the New Mandate White Paper had advocated RPCVs engage in planning and evaluation and in specialized operations overseas and stateside. Their proposal suggested the National Peace Corps Association be the designated body to direct such operations.

The National Peace Corps Association lobbied to be designated the vanguard for the RPCV community. It didn’t get that. The NPCA is not named in the legislation; but, there are opportunities for non profit corporations, run by RPCVs, to receive federal funding; with a curious restrictions. The non-profits must be incorporated in the District of Colombia and the funding, which will be competitively awarded, comes from the Corporation for National and Community Service - home of the Freedom Corps.
(see website: nationalservice.org)

The private non-profits are to serve as “incubators for returned volunteers seeking to use their knowledge and expertise to undertake community-based projects to carry out the third and fourth goals of the Peace Corps Act.” Elsewhere, the Act stipulates that the “stated purpose of the nonprofit corporation shall be to act solely as an intermediary between the Corporation for National and Community Service.

The private non-profits have to be incorporated in the District of Columbia. Does this stipulations give an unfair advantage to the already politically powerful NPCA? And if so, why? And why the restriction to activities which are "community based?" Developing school curriculums; sponsoring writer workshops and Internet websites are just some of the ways that RPCVs have created to promote a better understanding of other peoples on the part of Americans. Does the "community activities" provision have to do with the public health and safety mandates of Homeland Security? Could this complicate programs for RPCVs who wish to work with foreign students or in immigrant communities?

Congressman Farr has graciously invited all of us to engage in discussing his proposed legislation. I urge that these changes be made to protect the integrity and independence of Peace Corps:

1. Reinstate the original language of the Peace Corps Goals,

2. Eliminate the requirement that RPCV non-profits have to be incorporated in the District of Columbia. Allow RPCV communities all over the country to participate.

3. Clarify the relationship of RPCV grants to the Public Corporation for National Service and the Freedom Corps. If RPCVs could become entangled with homeland security mandates; that needs to be spelled out.

4. Broaden the list of activities which are eligible for funding.

Another good article on the new Peace Corps legislation. However, I would note that the NPCA is not incorporated in Washington DC. I would also say that, "undertake community-based projects to carry out the third and fourth Goals of the Peace Corps Act", implies a pretty broad list of activiites for funding. Last but not least, as chairman of the NPCA's subcommittee on peace I believe we cannot state too often that the core goal of Peace Corps work is to promote world peace.

I agree with Joey on just about everything above about which I have an opinion at all, except I agree with Leo Cecchini's opinion regarding world peace and I do think we need to state the fourth goal. But the fourth goal should more closely agree with what Sargent Shriver said than the way it is worded in the "New Charter". Basically instead of sounding like a UN charter it should emphasize the oneness of humanity, as it did as stated by Sargent Shriver. I addressed this in more detail in a posting following the above description of the interview with Sam Farr if anyone is interested. Further, the issue of non-profits and NPCA involvement is quite related to concerns addressed well by David Searles in a link under "the case for Peace Corps Independence" in this same posting of Peace Corps News, in which the basic point is that domestic and international efforts at community involvement are different enough that they should not be merged. Does this argue against the NPCA or other non-profits being directly involved in carrying out activities, community-based or not, within the U.S.? Would such activities better be linked to Americorps or a comparable organization?

The three goals are fine as they are. They are clear and concise. Nothing needs to be added, and that last goal sounds like gibberish anyway.

I think the original 3 goals are best and should be kept. The proposed changes seem to politicize Peace Corps, and our work is not political. As long as we keep the name "PEACE CORPS", the 4th goal is redundant.

I would like to reiterate what Gigi and Scott are saying about the the three Peace Corps goals. My concern with the so-called fourth goal is that it leaves so much to be interpreted. In the case of the funding for RPCV activites, that goal is not going to be defined by Shriver nor is it going to be defined by the Peace Corps Community. It is going to be defined by the Director of National and Community Service Corporation because the Director will award the grants. The Director will control the money. The Director will channel the
funds through the non-profits RPCV corporations which in turn will handle administrative functions for the RPCVs doing the actual work. According to its web site, the Corporation for National and Community Service is the home of the Freedom Corps and its focus, right now, is on homeland security. I urge, again, that RPCVs demand that the relationship between this proposed funding and homeland security mandates be spelled out. I also believe that the guidelines which the Director will use to award the grants, "competitively," be delineated in the legislation. This is a wartime administration for a country which has been attacked. We have identified enemies; we have an Axis of Evil and we have a President who has said, forcefully, that "if you are not with us, you are against us." This is different from the traditional language of peace corps. Our enemies have been the likes of poverty and disease and hunger. I think it is critical that the legislation reconcile the peace corps experience with the mandates for homeland security.
I thank Leo and Steve for their kind words. Their committment to world peace and that of everyone associated with peace corps, is unquestionable, and I have tremendous respect for all of you.