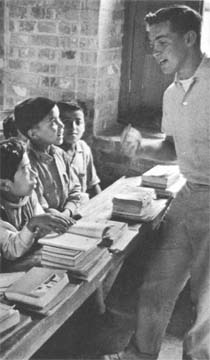 Draft legislation entitled "Peace Corps Charter for the 21st Century Act" (the Act) is a positive and encouraging development. Significantly different than the "New Mandate" proposal, it contains much to hearten supporters of Peace Corps and little to give us pause. As a general rule, in my view, it is better that such legislation be less rather than more inclusive. As this legislation proceeds through the legislative process much may be proposed. I'm hopeful it will not be changed substantially.

These are the major provisions of the proposed legislation:

Growth and Quality of the Peace Corps

It facilitates President Bush's proposed growth of Peace Corps to 15,000 Volunteers by 2007 by recognizing and funding this as a Congressional goal. Importantly, it mandates that quality be a guiding consideration in this expansion, taking advantage of the painful lessons learned from Peace Corps expansion into Eastern Europe and the former Soviet Republics. Finally, it asks the Peace Corps to establish an entity to conduct the necessary strategic planning for this purpose AND to evaluate existing Peace Corps programs.

Doubling the size of Peace Corps within five years is too ambitious, in my view. I would opt for a goal of 2009 or even 2010 for this expansion. There has not been an effective process in recent years for evaluating Peace Corps programs - except through an overworked Office of the Inspector General. In my view this is a very important function to restore.

The Fourth Goal and Grants

A Fourth Goal for the Peace Corps - consistent with the other three Peace Corps goals - is proposed: "...to help promote global acceptance of the principles of international peace and non-violent coexistence among peoples of diverse cultures and systems of government." A related innovation of this Act is the establishment of a grant mechanism to facilitate third and fourth goal projects by RPCVs. Through funding of up to $10 million per year by the Corporation for National and Community Service, projects consistent with those goals and proposed by RPCVs could be competitively funded through an NGO (yet to be named or established).

The Act encourages the Peace Corps to establish a National Advisory Council consisting of up to seven members, all of whom are to be RPCVs and provides this Council with a role and structure. Many of us remember the Peace Corps Advisory Council of the 60s and 70s which was marginally beneficial to Peace Corps and was eventually politicized and died. The new Council would be smaller and "bipartisan" - no more than four could be from the same Party. In my view, the provision could benefit from a formula to make it "non partisan", but the formula does recognize the realities of Washington.

The Peace Corps' independence from the USA Freedom Corps and from any intelligence related activities is recognized and codified in the Act. This is important and timely given the maelstrom of the U.S. "War on Terrorism" and it's tenacle-like imperatives.

Through this Act, the Peace Corps is encouraged to expand into countries where Peace Corps Volunteers could contribute significantly to a "... greater understanding* of Western values and goals and dispel unfounded fears and suspicion among peoples of diverse cultures and systems of government, including peoples from countries with substantial Muslim populations." Further, it provides Peace Corps with authority to make greater use of qualified RPCVs for this purpose and it provides for extra funding for this purpose, up to $5 million per fiscal year through 2006.

I find this aspect of the legislation troublesome in that it lends itself to interpretations which I don't believe are intended. Fortunately, the word "understanding" is used which acknowledges that Peace Corps Volunteers should not be advocates of their own cultural values but examples. Perhaps other changes in the language could clarify the intent.

Peace Corps is directed to engage in global efforts to fight HIV/AIDS, Tuberculosis and Malaria by providing training to all PCVs which will facilitate their appropriate involvement in fighting these infectious diseases. This is a recognition of the magnitude of the HIV/AIDS crisis as well as the troubling growth of Tuberculosis and the continuing threat of Malaria throughout the world. Further, this combines a number of separate initiatives which would have been difficult and disruptive for Peace Corps to implement separately.}

Finally, Peace Corps is required to consult with Congress and it's new National Advisory Council before implementing any "new initiatives". This is intended to keep Peace Corps focused on its core mission and prevent funds from being diverted for other purposes. Also, the Act requires that the Inspector General of Peace Corps provide periodic reports on the security situations in countries in which Peace Corps operates. And, of not little concern to COSing Volunteers, the Act will propose an increase in the Readjustment Allowance.

Language in the Act

Language in the Act is carefully crafted to avoid "earmarking" funds and overly directing basic operational activities of the Peace Corps. Management of the on-going operations and strategic decision-making are best left to the management of the Peace Corps including decisions about which countries to enter or leave, planning and programming decisions, Volunteer health and safety considerations, etc. Fortunately, the tenor of the legislation is more guiding and enabling than directive.

Much of this act is occasioned by the current climate, circumstances and attitudes stemming from the tragic events of September 11. It recognizes that significant changes are taking place in the world and Peace Corps needs to adapt to them.

If this legislation is passed and signed by the President without significant alteration, much of benefit will have been achieved. Peace Corps will be strengthened and improved. I believe that this legislation should be supported strongly by friends of the Peace Corps.

Ken Hill's fascination with the Peace Corps began in 1965 when he served as a volunteer in Turkey with the economic development of small villages. His most recent, and final, assignment was acting chief of staff of Peace Corps. During the transition of administrations, he was, effectively, the chief operating officer of the $265 million Peace Corps program of over 7000 volunteers in 73 countries. Between 1994 and 1998 he directed Peace Corps country programs in the Russian Far East, Bulgaria and Macedonia and from 1999 through 2000 he was chief of operations for all Peace Corps programs in Europe and Asia.

Between tours with the Peace Corps, Ken held management positions with the ACTION Agency (federal volunteer programs), the Energy Department and the Office of Management and Budget. In 1975 he was appointed regional director for the Mid-Atlantic Region of ACTION and later as deputy associate director of domestic operations for ACTION was responsible for operational management of ACTION's ten federal regional offices and the recruitment of Peace Corps and VISTA volunteers. He worked to support the commercialization of alternative energy sources at the Department of Energy in 1979 and was a member of the Debt Collection project team at the Office of Management and Budget in 1980.

Good article. I would raise one point. The PCVs who served as business advisors in Eastern Europe were very well qualified. It was the concept, strategy, and structure of the program that was wrong, not the volunteers.

I agree with Ken that the quote beginning "a greater understanding of western values and goals..." is troublesome. In my opinion, anything which might seem to be promoting "western values" is potentially problematic, regardless of the true intention of the statement. I believe the simple presence of a Peace Corps volunteer provides an opportunity for the local population to become acquainted with that person's culture (and therefore values and goals). I would prefer the statement to read something more like this:
"Peace Corps Volunteers could contribute significantly to a greater understanding and respect between people of diverse cultures, religious beliefs, and systems of government." PCVs and RPCVs know that this has been happening all along.

Don't agree because Ken Hill was part of the problem with safety issues in covering them up during the 1990's and into 2002.

He is truly not for safety or rights of volunteers. I think he is insincere.

No. You will find we will be bringing more attention to our cases and it will over shadow your political bunk.