African Volunteers to Combat AIDS in Their Own Communities 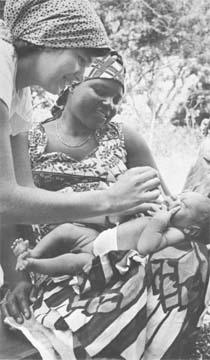 Read this Press Release from Africare on the HIV/AIDS Service Corps: a creative initiative to support HIV/AIDS prevention-and-care efforts by African volunteers, for the communities in which they live, at the grassroots level in Africa. Africare was founded by RPCVs including C. Payne Lucas, winner of the Peace Corps' Prestigious Franklin H. Williams Award honoring Community Service Leaders Nationwide. Read the story at:

African Volunteers to Combat AIDS in Their Own Communities*


African Volunteers to Combat AIDS in Their Own Communities

African Volunteers to Combat AIDS in Their Own Communities,American Communities and Others are Urged to Respond - A Creative Approach to the War on AIDS in Africa

Africare announced today the formation of its Africare HIV/AIDS Service Corps: a creative initiative to support HIV/AIDS prevention-and-care efforts by African volunteers, for the communities in which they live, at the grassroots level in Africa.

"Never before, to our knowledge, has a coordinated attempt been made to recruit African village volunteers as primary AIDS workers," states Africare President C. Payne Lucas. "The Peace Corps, for example, sends American volunteers abroad. Other U.S. Freedom Corps programs deploy American volunteers to meet needs at home. What is new about the Africare HIV/AIDS Service Corps, is that volunteers will be -- not Americans, not Europeans, not expert professionals of any nationality -- but 'ordinary' Africans: residents of villages, larger towns and cities who wish to share their time, energy and compassion to stop the AIDS devastation which surrounds them."

African volunteers may be primary school teachers or village health workers; potential "peer educators" such as truckers, shippers, migrant farm workers or members of other groups at high risk of contracting and spreading HIV; poor, elderly village women who have lost their adult children to AIDS and who are now struggling to support their children's children and other orphans of AIDS; school groups that write AIDS-education plays and then take them on the road, school to school, to inform other youths.

The support Americans - and indeed all of the world's concerned - are now being called on to give is financial. A gift of $600 a year, or $50 a month, will support the work of one Africare-sponsored volunteer.

Thus, members of a family of five can each donate $10 a month and, through the HIV-prevention work of "their" volunteer, save perhaps hundreds of lives. Churches, synagogues and mosques; school groups, sororities and fraternities; businesses and unions; social clubs and professional groups; family foundations -- any type of organization can collect sums from $6,000 (for 10 volunteers) to $15,000 (for 25 volunteers). "In the United States," Lucas continues, "$50 a month doesn't go very far: it's about the cost of a modest evening out. In Africa, for local volunteers, $50 a month can make a major difference. This program offers supporters an affordable way to get personally -- and meaningfully -- involved."

Under the first Africare HIV/AIDS Service Corps, the first Africare-sponsored volunteers are being recruited now in Burkina Faso, Cote d'Ivoire, Ethiopia, Ghana, Mali, and Uganda for a summer start date. As funding grows, the Corps will spread to other African nations where HIV prevalence rates are also especially high. "By the end of the year 2002," states Lucas, a former Peace Corp director, "we envision an Africare HIV/AIDS Service Corps deploying hundreds of African volunteers Africawide -- with sufficient funding, saving thousands of African lives.

"Africans are in a race against time," Lucas warns. "HIV is being transmitted at alarmingly high rates every day in Africa. By the same token, every day, we also have the opportunity to help: to save the life of a child, to educate a teenager in HIV prevention, to prevent new transmissions through proper care of people already infected. Africare knows that the place to intervene in the African AIDS crisis is wherever possible and the time to intervene is now. Africare's HIV/AIDS Service Corps has been created to carry out just such interventions: going right to the people, accelerating and improving efforts already underway, and employing the least possible 'red tape.' Further, through our support, we honor the work being done by and for Africans and hope to let the world community know, better than they know now, that Africa truly can be, not an international drain, but an international partner."

Background: Evolution of the Africare HIV/AIDS Service Corps The oldest and largest African-American organization specializing in aid to Africa, Africare began addressing the African AIDS crisis in 1987, shortly after the epidemic began. Today, Africare is supporting HIV/AIDS programs in 18 African countries: programs in HIV prevention, counseling and support for those already infected, and assistance to AIDS orphans.

Through these and other programs, Africare has become familiar with AIDS work being carried out on an informal, volunteer basis by Africans themselves.

For the most part, those volunteers have a great potential for lasting impact, since they are accepted by their communities, understand local beliefs and customs, and are permanent residents of the areas. For the most part, too, they are struggling to maintain their work. They need stipends to enable them to take time away from income-earning work -- however small that income usually is -- to volunteer in the anti-AIDS cause. They need a basis of training to ensure that their medical knowledge is up to date. They may need supplies such as condoms; they may need to purchase petrol to drive to neighboring villages to conduct AIDS-prevention education; they may benefit from a supply of basic literature on AIDS.

Through Africare's HIV/AIDS Service Corps, volunteers such as these will be identified and, according to the specifics of their situations, be supplied with support that will greatly enhance their results, while maintaining their status as volunteers.

By every indicator, Africa has been hit harder than any other world region by the HIV/AIDS pandemic:

* AIDS is the leading killer in Sub-Saharan Africa today. Worldwide, AIDS is the fourth-biggest killer. * Of all the people living with HIV or full-blown AIDS, more than 30 million -- three-fourths of the world total -- are in Africa. * More than 17 million Africans, including 500,000 children, have already died of the disease. Every day, some 6,000 people of all ages in Sub-Saharan Africa die of AIDS; every minute, one African child dies of AIDS. * AIDS orphans in Africa now number more than 12 million. That represents more than 90 percent of all AIDS orphans in the world. * The adult AIDS prevalence rate is 8.4 percent in Sub-Saharan Africa -- as opposed to 1.2 percent worldwide and 0.6 percent in North America. In several African countries, one out of every four adults has HIV or AIDS. * AIDS is not "just" taking lives but also overwhelming fragile health-care systems, decimating national economies and threatening the security of many nations. Leaders from U.N. Secretary-General Kofi Annan to former South African President Nelson Mandela have called on the world to help. "This unprecedented crisis," stated the Secretary-General, "requires an unprecedented response -- a response from all of us, whoever and wherever we are. A response that makes humanity live up to its name." 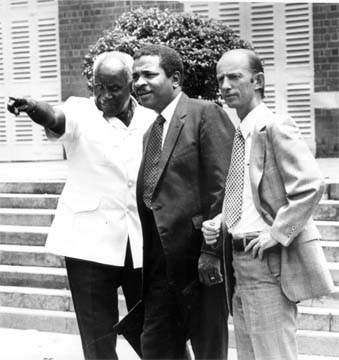 Africare Africare works to improve the quality of life in Africa, with programs in civil-society development and governance, food security and agriculture, health and HIV/AIDS, and emergency humanitarian response. Since its founding in 1971, Africare has delivered more than $350 million in assistance representing 2,000 projects and millions of beneficiaries to 35 countries Africa?wide. Today, Africare's 150 plus programs reach families and communities in 27 nations in every region of the African continent. A private, nonprofit organization, Africare has its international headquarters in Washington, D.C. "I regard Africare as one of America's greatest gifts to Africa. Your work, in every corner of our great continent, has sustained our own commitment to building a strong and free Africa." -- Nelson R. Mandela, Former President of South Africa and Honorary Chairman of Africare

This story has been posted in the following forums: : Headlines; Service; What RPCVs are doing

Here is some very important information that should be of help in your efforts.

Hello Africa, am a Ugandan girl aged 22years i've lost both parents to the deadly AIDS scourge at a tender age. I wouldn't wish anyone in this world to go through the hell me and my siblings have beeen through.
I would therefore wish to volunteer in any of the fields available to educate people abut the dangers of this killer disease.
TOGETHER WE CAN THROUGH AIDS OUT FOR GOOD.

Hi
I live in Cape Town and would like to learn more about how I can help to conquer aids or provide support. I am struggling to find information on becoming a volunteer in my local community.
Any help would be appreciated Thanks

monica nyangoma if you ever get back on this site please contact me cause i am looking for you. IRENE