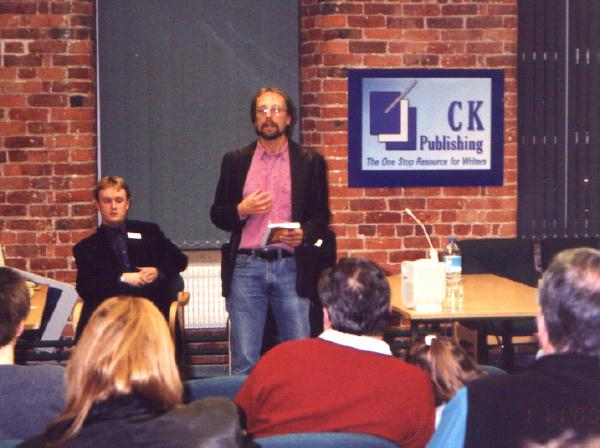 Read and comment on this story from the Santa Fe New Mexican on RPCVs who recently read essays they had written on their Peace Corps esperience to commemorate the 40th anniversary of the Peace Corps at:

Former Peace Corps volunteer Sally Ventres offers these words of advice to other senior citizens interested in joining the corps.

Ventres was a retired 60-year-old hospital administrator when she joined the corps in 1990. She volunteered in Haiti as an administrator of a health clinic.

"The house had no electricity or plumbing," she read. "I used the last of the beer to brush my teeth."

The readings commemorated the 40th anniversary of the Peace Corps, which actually occurred last year, but because of the Sept. 11 attacks, events were delayed.

"My whiteness did stand out in the sea of black" in Haiti, Ventres said, describing the "small, stark naked boys (who) just stood there smiling andstaring." She read her essay from An Inn Near Kyoto, a compilation of writings.

Another former volunteer, Charlotte Berney D-Aigle, remembers her students in the small town of Mount Eglon in eastern Uganda. D-Aigle volunteered as a high-school teacher with the corps between 1966 and 1968. She learned to speak Swahili while there.

D-Aigle remembers the poor people who grew coffee on the sides of the mountains amid the jungle, rain, rainbows and rugged dirt roads.

The poor students she taught were serious about education. "If a teacher were sick, the students would go to class and work quietly," she said.

D-Aigle wrote Peace Corpse, a story published under the name Berney in the Alfred Hitchcock's Mystery Magazine, based on her experience.

Tana Beverwyk-Abouda, a volunteer who worked with HIV-AIDS patients in Malawi, told about arriving in Africa with her parents, Mary Parsaca and Jim Beverwyk, who had served in Kenya as newlyweds in 1969 and 1970. While they were there, Beverwyk-Abouda's sister was born, the first white baby the villagers had ever seen. On a visit to that village, where her parents had taught school, the chief, one of their former students, "could hardly believe that the 25-year-old woman standing in front of him was the same tiny baby to whom he and his friends had brought gifts when she was born," Beverwyk-Abouda said.

During her service, Beverwyk-Abouda saw "anxious-faced students learning out of old dingy textbooks" just like those her parents had taught years before.

After reading her essay from Peace Corps: The Great Adventure, Beverwyk-Abouda said, "It seems more glamorous to go to Africa than to go to Gallup or Española to help. There are places in our own country that could also use our help."

The aid the corps offers depends upon the needs of each country, said Abe Peña of Grants. "We do not parachute volunteers into countries with what we think they need," said Peña, a former corps director in Honduras and Costa Rica. He is the author of Memories of Cibola.

The strangest request he ever received was from a town that wanted a symphony director, Peña said. Residents of San Pedro Sula, Honduras, considered music to be part of their culture.

Because man does not live by bread alone, he said, "when the request came to us, we gave it a lot of thought."

The corps eventually provided the town with a symphony director who created an orchestra for a very poor people, Peña said. Many of the instruments, including flutes, violins and guitars, were donated.

Peña lived abroad with his wife, Viola, and their four children. The children had to be tough, Viola Peña said.

Being a volunteer, as the Peace Corps slogan says, is "the toughest job you'll ever love," Ventres said.

This story has been posted in the following forums: : Headlines; What RPCVs are doing

Greetings from North Carolina. I teach an advanced college course on US-Latin American relations. If any of you is willing to respond to student questions about your Peace Corps experience and/or about your views on US policies in Latin America, please let me know. There's nothing like firsthand views to pull students outside the narrow realm of printed textbooks. I'll compile a list of volunteers and provide it to the students. The number of queries would not be excessive-- probably no more than 3-6 per semester.

I would like more information on the CK Publishing Co. Thier banner appeared in the photo in your article. I have a collection of short stories related to life in "the bush" I would like to have published.
Bill Timmons
RPCV NIGER 4 1965-67
timmonsr@pe.net

I still have my collection of short stories based on my 27 years of 'Peace Corps and beyond'life in Africa and Asia. I am still looking for a publisher. I also have a major work (100,000 words plus) about a German prisoner of war, in rural America.
Bill Timmons, RPCV Niger IV; 65-67
timmonsr@pe.net