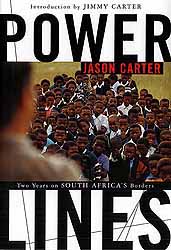 Read and comment on this story from MSNBC about Presidential Grandson Jason Carter's book about his years in South Africa as a Peace Cors Volunteer at:

June 14 — The Peace Corps is celebrating its 40th anniversary next week, and one of its most recent volunteers has some pretty heavyweight inspiration. Jason Carter, grandson of President Jimmy Carter and great-grandson of Miss Lilian Carter — herself a Peace Corps volunteer back in the late 1960s when she was 70 years old — took up the family tradition of public service and spent two years in the Peace Corps in South Africa. Now, he’s back and he’s written a memoir called: “Power Lines: Two Years On South Africa’s Borders.” Read an excerpt below.

Other books by Jason Carter

COMING BACK FROM Mlondozi School in the teachers’ koombi, the valley of Nhlazatje opened up before us as we rounded the mountain. At the bottom of the hill, the road turns to the left and a large grassy bank rises on the right side. At that bank we saw a truck, overturned, and the blue Venture that Sam Malaza used to carry the Sisukumile teachers to and from school. A huge pile of something pale tan was strewn on the ground. The grass has turned to ash, I thought. “What is that?” I asked. “Is it people?”

We approached slowly, nervous about the possible carnage. As we pulled up behind Sam’s car, we saw the teachers from Sisukumile, all of whom I knew well, standing in the pile picking up pieces and inspecting them. “What is that?” I said again, alarmed.

“Izinkhukhu,” one of the teachers said, smiling. “Chickens.” The koombi stopped. Sam was standing near his Venture with the back open, piling in box after box of chicken. There must have been 10,000 chickens, divided and wrapped, ready for supermarket shelves, in packages that said “Braai Pack,” “Mixed Portions,” “Legs and Thighs,” “Wings,” and “Whole Chicken.” The boxes had mostly been destroyed, but the plastic wrappings were intact.

I saw Vincent standing in a pile of Mixed Portion bags. “Hey, Musa!” he said. “Bheka lezinkhukhu! — Look at these chickens!” He switched to English: “It’s unbelievable, don’t you think?”

Vincent followed my eyes to the red truck cab and the driver sitting up, hunched over and bleeding. The trailer had apparently been disconnected because it was 20 yards or so behind the cab, which was jammed into the grassy bank. “Is he alive?” I asked in Zulu.

“Yes. He is very lucky. We saw the whole thing from the top. He was running so fast and he couldn’t make this turn,” Vincent said in Zulu, motioning with his hand. He switched to English: “We called the police and the hospital. The ambulance is coming. I think he is OK.”

“Let’s go get some chicken,” Vincent said. “Sam is loading up his car.”

By this time Sam’s Venture was almost completely full. A silver BMW pulled up, and two white men got out, grabbed two cardboard boxes of chicken, put them in their trunk, and sped off. In the distance, the police and the ambulance were approaching from Nhlazatje. The other koombi of teachers from the schools near the border pulled up behind ours, and they stormed the pile, too, picking chickens and packages of parts. Only I hesitated. “Musa, what’s wrong?” someone yelled.

“Ah, these chickens aren’t ours.” I said, unsure what to do.

“Musa, this is food. If we don’t take it, it’s going to spoil or be eaten by the dogs. Take some home to Gogo.”

The ambulance arrived, and they treated the driver. The police also arrived. They said nothing about the teachers grabbing the chicken. “Heita, Musa!”

“Heita!” I replied to one of the cops I knew from eLukwatini, and I started to relax. I did want to pick up some chicken for Gogo. I picked up a braai pack, a bag with several big pieces of meat — no wings and no internal organs.

Then a family of white tourists pulled up and stopped. The father got out to see what was happening, telling the rest of his family to stay in the car. The father reached into the car, fumbled around, and pulled out a video camera.

Through the viewfinder he must have witnessed quite a scene. Thirty-five well-dressed black people running back and forth, filling their cars and koombis with chicken piled on the ground. The police standing by the wrecked truck chatted, and the paramedics worked on the driver on the ground.

I was paralyzed. Was he planning to show the video to his friends and talk about how barbaric these blacks were?

He then yelled to everyone, “These are not your chickens! You’re stealing!”

I laid down the braai pack.

The police began to shoo us back to our respective transports. Vincent, still holding a few chickens, explained that they could not leave because Sam had filled his truck to the top with chicken and had left. He would be right back to collect the teachers.

I climbed back into the koombi and sat down between bags of chicken, with my feet up on two boxes, and we drove off. “Musa, hawu! Why didn’t you get any chicken?”

I could not answer. I had no real reason for not taking the chicken, and I could see the point of both sides. When the man had yelled, I had for some reason used his comments as my moral compass.

As we pulled away, the tourists continued to record the scene, and Sam’s blue Venture appeared, relieved of its chicken burden, to pick up the teachers.

The news spread fast. On my way home a few hours later, pickups full of people holding chicken parts, screaming and honking their horns stretched in a line from the accident site to the crossroads where I was hitching. At home, Gogo and Boni were excited. “Musa, how much chicken did you get?”

This story has been posted in the following forums: : Headlines; What RPCVs are doing; COS - South Africa

I've read the book and was lucky enough to go to a local bookshop here in Raleigh that had Jason Carter visit to promote and talk about his book. "Power Lines" is realistic yet uplifting, not rife with cynicism and melodrama like other books about the Peace Corps experience can be. He's hopeful about South Africa's future and his book made me look differently at my country of service.I highly recommend it!