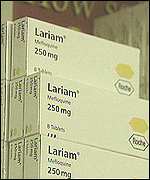 Read and comment on our special report on Lariam at:

Mefloquine, known commonly under the brand name Lariam, is the most prescribed malaria drug in the world and has been used by PCV's in Africa for over ten years. It's clearly the most effective drug. And controversial.

An increasing number of Lariam users have reported depression, nightmares, hallucinations, paranoia and other psychotic symptoms after taking the drug. Now the Washington Times' Insight magazine has published an article saying that Lariam has triggered mental problems so severe that in a small percentage of users it has led to suicide.

Other researchers say that all medications have side-effects, that Lariam's side-effects are well known and have been disclosed, that studies have shown only a small percentage of volunteers are affected, that if patients are properly screened and the medication prescribed with informed consent that its benefits far outweigh its risks, and that the charges have been sensationalized.

Read our special report that provides both sides of the Lariam controversy as well as an assessment of Lariam by an RPCV who served in the Gambia about possible Neurological Side Effects of Mefloquine.

What has been your own experience receiving Lariam in the Peace Corps?

This story has been posted in the following forums: : Headlines; Special Reports - Medical; Peace Corps - Washington; Peace Corps - Safety and Security of Volunteers

I took Larium while serving in Senegal (01-03). I only took it during training however because it drove my blood pressure up to 180/110 which was causing my heart to stop twice a minute. I also had vivid dreams that were beyond anything I ever experienced before. I found it to be a very disconcerting drug.

My wife and I spent 3 weeks in Costa Rica in 1996. I took Larium prior to and during our stay. I became ill on the trip, and worse when reentering the states. The illness was intestinal. Before this siege was over, I had 4 gastroscopies to check the condition of my stomach which had taken on the look of a bumpy, reddened, and inflamed organ. This was an unusual gastritis that required me to follow a diet that restricted all soda, all cafeine, all spices for over two years. I have had recurring setbacks similar to, but weaker than the original symptoms. My advice. Do not take Larium