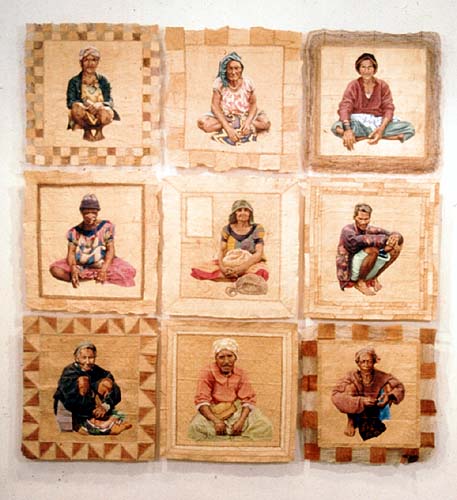 When Jena Sibille was in Papua New Guinea, she found herself in a culture so very different from her life in Georgia, yet through her eye for art she found some comparisons.

''My work in general has focused on women's issues and a cultural identity of myself as a Southerner,'' she said.

In the New Guinea countryside the women used bark cloth and twine to fashion clothes and other items they needed.

''Even the act of the way the women created the bark cloth or the bags reminded me of Southern quilting bees. They are all related to functional items, utilitarian, clothing or bags or quilts,'' Sibille said.

And that was the inspiration for her artwork ''The Market,'' which was created with acrylic paint on New Guinea bark cloth and bush twine. Nine women from that country have their likenesses painted on the work.

''For me it's a memory quilt of Papua, New Guinea,'' said Sibille, who works at the High Museum in Atlanta and commutes to the University of Georgia to work on her master's degree in art education.

This work captured the People's Choice Award at the Southworks 2002 Juried Art Exhibition, which recently closed. Each one of the 72 pieces of artwork in the exhibit received at least one vote from the viewing public, but Sibille's unique piece received 103 votes of the 673 cast.

Sibille grew up in Atlanta and lives there now, but she obtained her bachelor's degree in art from UGA in 1991. ''I've been making art since high school. I had a great high school art teacher. I really enjoyed making things, and from that point on, pretty much knew that making art was what I wanted to do,'' said Sibille, who entered Southworks for the first time this year.

In 1996, she and her husband, David Blanchard, joined the Peace Corps and went to Papua New Guinea, where they taught high school classes.

Bark cloth was a traditional cloth used by the women for clothing and also to wrap the dead for burial. The women in Sibille's painting were actual people she saw in the marketplace.

''I don't usually paint so photo-realistically, but I wanted to capture them the way they were,'' she said.

''That's why I tried to make it realistic. I didn't want my interpretation of them. I wanted to try to portray them.''

This story has been posted in the following forums: : Headlines; COS - PNG; Art; Awards