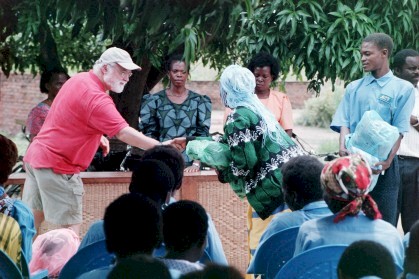 Read and comment on this story from the Canandaigua Messanger Post on Malawi RPCV Kevin Denny shown in the photo above who traveled to Malawi on an emergency mission to distribute 60,000 pounds of maize during the famine. He is a co-founder of Malawi Children's Village which will be featured on "NBC Nightly News." Read the story at:

CANANDAIGUA - Canandaigua resident Kevin Denny and members of the African charity he co-founded, Malawi Children's Village, will be featured on "NBC Nightly News."

Malawi Children's Village helps 37 tribal villages on the southern shore of Lake Malawi by providing medical care, food and education to African children orphaned by AIDS, and devastated by famines and homelessness. The charity serves 3,000 orphans in the Mangochi district.

Denny said NBC conducted a Web search and contacted him after seeing a 14-minute video made by a freelance filmmaker from Buffalo's Full Circle Studios last year.

Earlier this year, Denny and board member Susan Wilkins traveled to Malawi on an emergency mission to distribute 60,000 pounds of maize, the country's food staple, during the famine. The organization's medical officer and co-founder Chakunja Sibale won a national Peace Corps award in June and visited Canandaigua afterward to solicit more help for the orphans.

An NBC news crew is currently in Africa filming interviews with Sibale and others while Denny was to be interviewed Wednesday by another news crew.

An air date has not yet been scheduled, Denny said.

This story has been posted in the following forums: : Headlines; Service; What RPCVs are doing; COS - Malawi

Hey Kevin,
Hey its Bobbi Roberson, from Mangochi, the one that lived way up in the mountains across from the lake. Anyway, what a terrific thing to be apart of. If you ever need some assistance you can email me at bobs777@hotmail.com.
It was nice to hear about you.
Bobbi

I would like to get in touch with in regards to the cars that are MCV. I last spoke to Dr. Sibale
and he gave me your contact information and i never got a response from you.