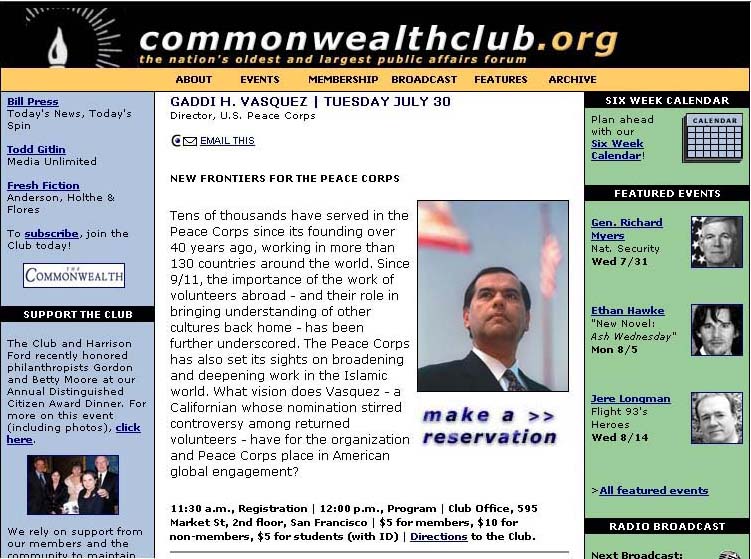 Read and comment on this Press Release on their web page from the Commonwealth Club of San Francisco on a speech Director Vasquez will be giving in San Francisco at noon on July 30. at:

NEW FRONTIERS FOR THE PEACE CORPS

Tens of thousands have served in the Peace Corps since its founding over 40 years ago, working in more than 130 countries around the world.

Since 9/11, the importance of the work of volunteers abroad - and their role in bringing understanding of other cultures back home - has been further underscored. The Peace Corps has also set its sights on broadening and deepening work in the Islamic world.

What vision does Vasquez - a Californian whose nomination stirred controversy among returned volunteers - have for the organization and Peace Corps place in American global engagement?
Gaddi H. Vasquez

This story has been posted in the following forums: : Headlines; Special Reports; Peace Corps - Directors

Thank you for having Michael Rupert address you membership August 31st. A friend down-loaded a copy from the From-The-Wilderness website(www.fromthewilderness.com/PDF/Commonwealth/pdf) and gave it to me the next day . We all need to know about Bush's clandestine American Empire and the pending disaster that is becoming known as "peak oil." I hate being blindsided, how about you?