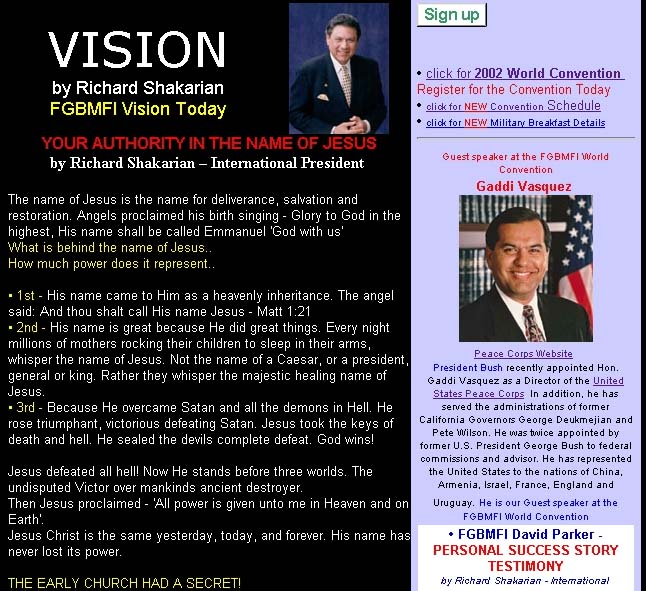 Peace Corps Director Gaddi Vasquez will be addressing the Full Gospel Business Men's Fellowship International on July 27 in Miami Beach. Read and comment on this background material on the organization at:

Profiles of U. S. Private Organizations and Churches, was compiled by the Interhemispheric Resource Center, Box 4506, Albuquerque, NM 87196. < http://www.irc-online.org/ > Their work focused on issues related to U. S. foreign policy in Mexico, Central America, and the Caribbean. Note that this collection includes a wide range of groups with a variety of political viewpoints. Some, like the Heifer Project, appear to be what they seem-engaged in charitable humanitarian efforts. Check when each article was last updated as much material is no longer current. This material is provided as a source for historic research.

This charismatic/pentecostal organization of business and military men was started in 1952 by the wealthy exdairyman Demos Shakarian in Los Angeles, California. (1,2,4) Oral Roberts spoke and led a prayer at the first organizational meeting. (1) Now the Full Gospel Business Men's Fellowship International has over 600,000 members in 93 countries. (1,6) Women are not allowed to join. (6) Along with other charismatic organizations like the Christian Broadcasting Network, PTL Ministries, and Oral Roberts, Full Gospel Business Men's Fellowship has been credited with stimulating the rapid growth of the modern charismatic movement in the United States. (5) This non-denominational group includes some Charismatic Catholics, as well as evangelical Protestants. They believe in the "baptism of the Holy Spirit," manifested in the practice of speaking in tongues and faith-healing. Most members agree that we are "living in the last days," and that they are called to harvest souls before the Second Coming of Jesus Christ. (1) Most of the group's members are businessmen, but prominent U. S. members include high military officers, ex-officers, or managers in the military-industrial complex, many of whom worked within the nuclear weapons establishment. Many of them believe that the Gog-Magog war prophesied in the Bible will culminate in nuclear war, but that they will be raptured before the apocalypse. (1)

FGBMI produces books, a magazine called The Voice (in seven languages), and Christian TV programs which are aired on networks such as Trinity Broadcasting and PTL, as well as independent stations. In fact, the group provided the seed money to found the Christian Broadcasting Network, PTL teleministries, and Trinity Broadcasting. The fellowship holds national, regional, and world conventions. Gen. Efrain Rios Montt, the evangelical ex-president of Guatemala, spoke at the world convention in 1984. At the 1986 world convention, people gathered the signatures and addresses of potential supporters for Pat Robertson for President. (1) FGBMFI organizes "airlifts" in which members fly to target countries at their own expense to organize prayer breakfasts with the country's top business leaders. There have been "airlifts" to Costa Rica, El Salvador, and Guatemala, as well as Haiti, Mexico, the Philippines, and South Africa. (1) It was reported in 1987 that the presidents of El Salvador, Guatemala, and Honduras had all attended FGBMFI prayer meetings. (1,6) According to Jose Pascua, International Coordinator of FGBMFI, "The Lord is doing a glorious work in all the countries of Central America. "(7) Specific activities include:

Washington DC: Since 1964, FGBMFI has held regular military prayer meetings in the Washington area. There are now three chapters there, including one in the Navy Officers' Club, and the Secretary of Defense even arranged to have two prayer rooms built in the Pentagon. (1) Reagan administration staff members have been instrumental in organizing FGBMFI prayer meetings among the Washington elite. A 1986 FGBMFI brochures list people "vitally affected" by the prayer meetings: Lt. Gen. Dick Shaefer, Col. Speed Wilson, Col. Hank Lackey, Chairman of Joint Chiefs of Staff, Commandant of the Marine Corps, Chief of Naval Operations, Maj. Gen. Jim Freeze, Maj. Gen. Jerry Curry, Col. Andy Anderson, Chief of Staff of Army, Chief of Staff of Air Force, Sgt. Maj. Bud Nairn and 1st Lt. David Nairn, and Brig. Gen. Charles Duke. (1) (Some of the above people were unnamed in the brochure. ) FGBMFI founder Demos Shakarian was a participant in the Washington for Jesus rally in April, 1980. (2) (See also Govt Connections. )

El Salvador: FGBMFI has several branches in the country which meet at luxury hotels like the Camino Real. Its 1987 national convention was dedicated to the "preservation of national unity," and a featured speaker warned members that they had to protect the many liberties they have in El Salvador. (8)

Guatemala: The fellowship entered Guatemala in 1952, only one year after its inception in 1951. The Guatemala directors are leading businessmen, media people, and military officers, including a former minister of defense. Prominent members frequently travel through Latin America setting up chapters. FGBMFI members often say that they have turned their business over to the Lord and that they are the happiest people on earth. (9) John Carrette, a prominent FGBMFI member, told a meeting of the Indian Evangelical Association ASIDE that Indian pastors should not support or finance political candidates in any way. Carrette himself was a vocal supporter of the evangelical ex-president Gen. Efrain Rios Montt. (9) Rios Montt spoke at the FGBMFI 1984 world convention. (1)

Honduras: FGBMFI has been forming affiliates in Honduras since 1978, and currently has more than 20 chapters in the country. Most chapters meet in exclusive hotels and restaurants, and they collaborate closely with World Gospel Outreach. (10) The Hotel Honduras Maya chapter of FGBMFI supplied seed money to a military school for teenagers (Nido de Aguilas or Nest of Eagles) with the hope of creating disciplined, anticommunist, and God-fearing future leaders. (10) It was reported that a CBN film crew traveled with members of the Full Gospel Businessmen's Association (sic) to film contra forces in Nicaragua (actually in Honduras). (3)

Former President Ronald Reagan has close ties with the Full Gospel Business Men's Fellowship. In 1970, five FGBMFI members, including Pat and Shirley Boone, Harald Bredesen, and George Otis, prayed with then-California Governor Reagan at his home in Sacramento. Otis, a former Lear executive, was overcome with the Spirit and began to speak in the voice of God. He compared Reagan to a king, and prophesied that Reagan would "reside at 1600 Pennsylvania Avenue" if he continued to walk in God's way. Apparently Reagan took the prophesy very seriously. (1) James Watt and Herbert Ellingwood were among the members of the Reagan administration who participated in FGBMFI. Ellingwood and others within the administration organized hundreds of prayer meetings and Bible study groups in the Washington area. Carolyn Sundreth, a Reagan aide who later worked on Pat Robertson's presidential campaign, invited Nita Scoggan, the wife of a FGBMFI member, to form a prayer group in the White House. Reportedly, Col. Oliver North attended the prayer meetings. (6) In 1978, Reagan confidante Herbert Ellingwood told the Los Angeles Times (in a story which Reagan confirmed) that a FGBMFI prayer group healed Reagan's ulcers. (1) Ronald Reagan has also given his testimony at FGBMFI prayer meetings. (1) (See Activities for further Washington DC connections. )

Prominent right-wing activists, such as Joseph Coors (Heritage Foundation) and Sanford McDonnell (McDonnell Douglas Corporation), are members of FGBMFI. (1) The connections between FGBMFI and Pat Robertson are numerous. Robertson has preached at FGBMFI prayer meetings. Long-time FGBMFI member Harald Bredesen was Robertson' mentor and teacher, and has been on the CBN board of directors since 1962. He is a frequent speaker at FGBMFI meetings, and was present at the Reagan presidential prophesy. (1) On the board of regents at CBN University is FGBMFI member Maj. Gen. Jerry Curry. George Otis, also present at the 1970 meeting with Reagan, formed Middle East Television ("broadcasting from the Armageddon bowl") in Israelioccupied Lebanon, which he later turned over to CBN. Herbert Ellingwood, FGBMFI member and formerly of the Reagan administration, worked on Pat Robertson's presidential campaign. (1) In Honduras, the fellowship works with World Gospel Outreach. The 1986 FGBMFI president, John Arevalo, was also the World Gospel Outreach director. (11) The mission of that religious and charitable organization, led by a banker turned evangelist Rev. Allen Dansforth, is to prevent commmunist revolution by serving the Honduran poor, particularly children whose "minds are soft" and who are "naturally dependant. "(11)

2. Deborah Huntington and Ruth Kaplan, "Whose Gold is Behind the Altar? Corporate Ties to Evangelists," Contemporary Marxism, Winter l98l-l982.

The underlying cites for this profile are now kept at Political Research Associates, (617) 666-5300. http://www.publiceye.org.

This story has been posted in the following forums: : Headlines; Peace Corps - Directors

PRAISE THE LORD , GOD IS GOOD ALL THE TIME . I
UNDERSTAND THE WORLD FULL GOSPLE CONFERENCE IS COMING ON AT NIGERIA THIS AUGUST GOD HAS PUT ON MY HEART TO BE PRESENT THERE I NEED 30 THAUSAND DOLLAS TO MAKE THE TRIP PLEASE ALOUD GOD TO USE YOUR MONEY TO HELP ME MAKE THE TRIP . I AM AT TESANO CHARPTER ACCRA GHANA . SEND THE MONEY THROUGH WESTERN UNION MONEY TRANSFER SSB BANK GHANA, AFTER SENDING THE MONEY NOTIFY ME WITH THE NUMBER FOR COLLECTION. GOD BLESS YOU FOR THIS OPPORTUNITY. PEACE SHALLOMM,

PRAISE THE LORD , GOD IS GOOD ALL THE TIME . I
UNDERSTAND THE WORLD FULL GOSPLE CONFERENCE IS COMING ON AT NIGERIA THIS AUGUST GOD HAS PUT ON MY HEART TO BE PRESENT THERE I NEED 30 THAUSAND DOLLAS TO MAKE THE TRIP PLEASE ALOUD GOD TO USE YOUR MONEY TO HELP ME MAKE THE TRIP . I AM AT TESANO CHARPTER ACCRA GHANA . SEND THE MONEY THROUGH WESTERN UNION MONEY TRANSFER SSB BANK GHANA, AFTER SENDING THE MONEY NOTIFY ME WITH THE NUMBER FOR COLLECTION. GOD BLESS YOU FOR THIS OPPORTUNITY. PEACE SHALLOMM,

Sure, I'll get right on that ... No offense but both countries mentioned are notorious for money scams. Good luck. And how could it possibly cost you $30,000 to attend a gospel conference in Nigeria?

I'm wiriting, because as obvious as some of these scams seem, I've known persons, otherwise considered intelligent, who actually sent money to open requests like the one above, or participated in money transfer scams.

IN JESUS NAME I GREET YOU ALL
MY NAME IS LIPHEPHENG SELIMO FROM BUTHA-BUTHE LESOTHO AND I AM A BORN AGAIN CHRISTIAN
I AM ASKING FOR ASSISSTANT BECAUSE I HAVE BEEN CHOSEN TO FULFILL ONE OF GOD' WORK OF BEING CHILDREN GAURDIAN BUT I DO NOT HAVE EVEN A CENT TO START THIS WORK IAM TALKIND ABOUT MONEY FOR FOOD, CLOTHES AND PAYING SOME OF THE SCHOOL FEES EVEN SOME BIBLES
PLEASE ASSIST ME BECAUSSE I PRAYED BEFORE I CAN OPEN THIS WEB SITE AND I GOT YOUR WEB SITE
ADRESS: P.O BOX 101
BUTHA-BUTHE 400
LESOTHO
SOUTHERN AFRICA
CONTACT: 09 266 22 460662(W)