Starvation looming for 150,000 in Swaziland 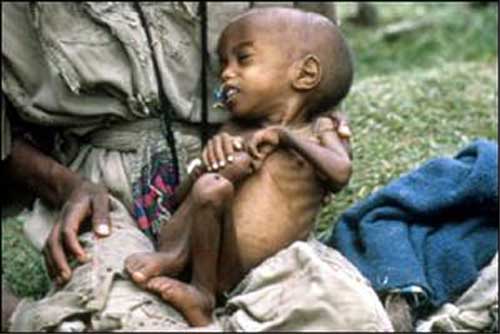 Read and comment on this story posted on the Swaziland RPCV list serv on the food crisis in most parts of Swaziland. People in the area interviewed painted a gloomy future on their lives. The situation in most of the starvation-affected areas is worse than spoken as children have started showing signs of malnutrition. A 50 year old woman of Mbutfo, a sub-area of Lavumisa, said the food aid donated by the US government was not fit for human consumption such that "even goats or pigs" can eat it.

What are volunteers in Swaziland doing to help the 150,000 Swazis who are reported to be facing imminent death in the face of a food crisis in the lowveld?

As the food crisis gets worse in most parts of Swaziland, many people, particularly women, have resorted to prostitution and crime as the only means for survival in the face of the ravaging famine hitting Swaziland.

A majority of families along the Lavumisa-Manzini highway are now giving away their female children, some as young as 12 years, to truck drivers who pay at least R50 for a round of sexual intercourse.

"I have seen them waiting along the road for the truck drivers who would stop for these young girls and as an adult I have noted that nothing else was happening inside these trucks except that they are sleeping with drivers," said Hlaleleni Vilane, a resident of Mbutfo area, a sub-area of Lavumisa in southern Swaziland.

Vilane said if she was not too old as she is aged over 50 years she would also join in prostitution.

"These people are living well than us. They eat well yet we are starving," she said. This difficult life lived by the Lavumisa people is part of the miserable life that is experienced by the over 150 000 Swazis are facing eminent death in the face of a food crisis in the lowveld, in particular where a majority of the people now cannot afford to have any meal for more than three days. A visit on Wednesday to the worst affected areas such as Lavumisa in the south of the country revealed shocking experiences by the starving people. Poverty coupled with the high rate of unemployment has forced many families to resort to crime as businesses in this area now report an increase in housebreaking and theft cases.

Local businessman and farmer, Johannes Nkwanyane said he has pardoned several of the culprits as he has anticipated the effects of the starvation crisis. He said in an interview that he now provides the worst affected families with free maize and leaves of cabbages that he grows on his farm.

"I would be able to give the people of Lavumisa enough food on a cheaper price if the government is not frustrating me. I have a big farm here which can provide sufficient food to feed the entire Lavumisa community, but the government is not allowing me to use the water drawn from the nearby Jozini dam in South Africa," he said.

Nkwanyane said since his misunderstanding with the Swaziland government over the payment of some gravel dug from his farm in which he was promised a sum of R1, 2 million, the government has done everything in its power not to allow him to carry on his farming in the area. The dispute over the payment is still in court. Nkwanyane said he is now prepared to use the water by force and said he is prepared for arrest.

"The people are hungry. They need food," he said.

People in the area interviewed painted a gloomy future on their lives. Vilane, the 50 year old woman of Mbutfo, a sub-area of Lavumisa, said the food aid donated by the US government was not fit for human consumption such that "even goats or pigs" can eat it.

"But my son there is nothing we can do because we are hungry. Our government has failed to save us from starvation. Instead what these people do, they are on holiday almost in their everyday lives," she said. "I was shocked when I heard over the South African radio stations that the king is buying a plane yet we are starving," she said.

The situation in most of the starvation-affected areas is worse than spoken as children have started showing signs of malnutrition. A mother found in the small border town of Lavumisa, Tengetile Matse (28) said she couldn't afford to feed her child, Siboniso who has no father. She said the only time she has got some relief from hunger was last week Wednesday when the National Disaster Task Force came to distribute food to the Lavumisa community.

"But even then I'm still facing difficulties because as I have no money to mill the maize, which too, is bad," she said.

Chairman of the National Disaster Task Force, Ben Nsibandze, said as far as he was concerned the food aid donated by the Americans was in good condition. He said it is common cause that people like to complain even when it's unnecessary. But an inspection we conducted with fellow journalists that visited the affected areas revealed that the maize and the beans are not in good condition.

A white powder filled our hands when we tried to assess by putting our hands in the containers that carried the maize and the beans. There were also a lot of weevils in it.

Swaziland's major opposition political party, the People's United Democratic Movement (PUDEMO) has called for sanctions against the kingdom's leaders whom it accused of abusing donor funds.

In a statement by PUDEMO's foreign representative, Jabulane Matsebula, the organization called on all donor organizations to apply similar sanctions against governments that do not take care of people's concerns. He said the purchase of the private jet for King Mswati III at a time when thousands of Swazis are facing death in the face of the raging drought was disgusting. Matsebula said it has become clear that the present tinkhundla regime was not prepared to bring about meaningful change in the kingdom, but to feed the hungry compatriots of the system.

The Swaziland Solidarity Network (SSN), an organization comprising of pressure groups from Swaziland, South Africa and abroad, also joined in condemning the purchase of the jet. But Swazi authorities have continued to be adamant that there is the need to have a private jet for the king.

This story has been posted in the following forums: : Headlines; Service; COS - Swaziland

My arabic school is starving me and the other pupils that go there at present.
HELP US!!!

We need lots of prayer for these Swazis, for food, no need for prostitution, and a well filled, good, healthy life.

It makes me sick, absolutely sick, to think that situations like these occur in the world today. I live in Australia, and unfortunately have never had the opportunity to be exposed to poverty such as this. I feel so powerless...all I want to do is help these people, and there's nothing i can do about it. It's just not fair!!

there is enough food to feed everyone in this world.. the distribution needs to be changed so that everyone has a chance at good life... it is not fair that people in America and other countries stuff there faces will other's have a small chance of getting a bread crum to eat for the day... there are ways to change this problem.. and it needs to happen asap... there may be no perfect world, but it can be a hell of a lot better than it is now!
~ashley, 14

i am very much shocked after looking this picture.my heart melted.why people fight for power??why they spend lots of money in weapon???why their mind dont attracted towards these people who are not getting food.I knew that how much important thing is FOOD.

HI MY NAME IS DALIA I AM 11 YEARS OLD AND I WHANT TO HELP I WILL SAVE MONY AND GIVE IT TO THE PEOPLE THAT NEED IT BUT I DONT NO WHO TO GIVE IT TO BUT MY MOM WILL HELP ME MY MOMS EMAIL IS MEA_11_55@HOTMAIL.COM

I like butthole. and long walks on the beach, and eating ham sandwiches while I wash the brown stains out of my underwear... Please help the poor people of the world (the people of arkansas)

Hi,
My name is Mohammed. I'm from India. I'm working for dell(call center). See friend I think we can very easily solve this problem of starvation. Just calculate this. There are thousands of MNCs in this world. And on an average there is about 300kgs of food just wasted by the employees per day. So if we just think of utilising this food by conducting surveys, contacting the concerned departments, etc. We can InshaAllah! help our brothers & sisters around the world to live like we do. If any interest? Please let me know.

omg you people, do something about this problem! if you sit an complain things will not happen, so join some organization or just sit there being an asshole!

I think that with a ton of prayer and action, God will provide.

what are 11 year olds doing on this page? ok one, my little activists, the process involved in helping people takes more than the fantastical notion of joining a group and distributing food. More is involved if you want a lasting affect. two, Politics, the governing party must be convinced to help their people instead of just themselves. The group of vigilanties roaming around pillaging must also be dealt with, and peacfully due to their state of mind(intolerant). three, Education must also be more efficient in impoverished communities and to all those naive children out there, the process of improving the life of all people out there will not take weeks, months, but decades of careful, patient planning and alot of arse kissing. Schools have to be built with a good amount of funding and teachers. SO, to increase education one must increase income right? So my little americans sending a dollar to an american organizations which is supposed to help those little children like the one above, did you know a majority of that money goes to making the life of some white guy more comfortable?

BUT though poverty is such a big issue, the world has other things to worry about...such as china's industrialization and their increase in Co2 emissions(don't forget america! yay america!!). global warming is imminent and if you want to improve the life of every impovrished person you have to save the earth from the next bloody mass extinction... so to those heros out there, dont jump into battle without tactics because your enemies will decimate you. Go to school and just because this picture is just that heart-wrenching you better understand that our world is set on a path of self-destruction, for its human nature.

any comments, please email me. i wanna know how wrong i am. hahaha

why are you people just saying that it is sad do something about it. So what if some "white guy" gets most of the money. At least the people who realy do get some money will be a little better of than they were before.