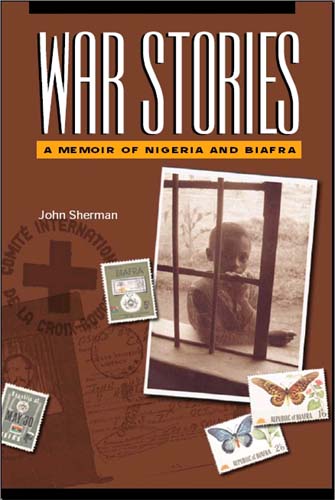 Read and comment on this excerpt from the book "War Stories: A Memoir of Nigeria and Biafra" by RPCV John Sherman who was a Peace Corps teacher in the Eastern Region of Nigeria for nearly a year when the region seceded and became the Republic of Biafra. All PCVs were evacuated from Biafra. He later returned to Nigeria to work with the Red Cross. Read the excerpt at:

WAR STORIES: A MEMOIR OF NIGERIA AND BIAFRA *


WAR STORIES: A MEMOIR OF NIGERIA AND BIAFRA

The following excerpt is from Chapter 6 of War Stories, "January 1969: Elele." Brace was an American doctor, Olive an American nurse, and Inga a Danish nurse. I dispensed medicine, drove one of the Land Rovers, and helped with food distribution, etc. at our daily clinics near the front lines. The italicized paragraphs below - and throughout the book -- are flashbacks to 1966-67 when I was a Peace Corps Volunteer in the same area of Nigeria (that seceded and became Biafra).

Every night after dinner, Inga, Olive, and I have the four cigarettes that come with each C-ration box. Brace fusses at us, and blames me for reintroducing cigarettes into the lives of the two women. They each have one; I have two. It seems so wonderful to sit back with a cup of coffee, even if it is not very good instant Nescafe´, and light up a cigarette that is God knows how old and exhale into the night. I hope I kill at least one mosquito with every stream of smoke.

It is my one true, quiet pleasure of the day. We speak very little while we are smoking.

James and John, our two stewards, are busy making conversation while washing the dishes. It is a reminder that I must soon drive them home.

It's about half a mile to where I drop them off. There are normally two roadblocks in that distance. One is between our house and the main intersection of Elele, and the other one is around the bend, near the spot where I drop them.

Every night we approach the roadblocks at about the same time, and every night it is the same reaction from the men guarding them: Screaming soldiers holding loaded guns which probably have their safeties off (if they have such devices at all), surrounded by blinding lights and more soldiers. What's worse, too often the soldiers holding those guns are drunk, so that the weapons are waving wildly about in the air.

I scream out, "Red Cross! Red Cross!" when I am challenged, but the goddamned soldiers can't hear me because they're too busy shouting for me to identify myself. One night, a few weeks ago, I got out of my Land Rover (something I have to do most nights, anyway), walked up to the man who had finally realized who I was, and said loudly, "I come through here every bloody night! At the same time, too, damnit! Why are you doing this?"

The next night, it was the same man, the same thing.

Once in a while, I will hear from the side of the road, in a voice that apparently someone thinks mimics mine, "Red Cross! Red Cross!"

The seat vibrates because James and John are shaking so hard with fear. It isn't safe for them to walk home the half mile because the soldiers are so skittish. It might mean death for the stewards, since they would suddenly appear out of the dark along the roadside and the soldiers would likely shoot first, then think about who it might be. And to go the back way, through the smattering of houses behind us to their own, could invite the same fate. Apparently, Elele is home to many deserters from other areas. And they usually have deserted with their guns--and their fears of being caught. No wonder so many people from here haven't returned. It's not safe to come back to one's own village.

Sometimes, when I have gone through the second roadblock, dropped James and John, and am on my way back, I'll be challenged again, so I have to suffer the soldiers two more times.

I never know what is the right thing to do. If I get down immediately and stand in front of my own headlights so they can see me, it can scare them to death. New soldiers especially think I am climbing down in order to shoot them. New and old ones shout contradictory commands ("Come down! Stay! Come down! Stay!") and I sit there, uncertain which one to obey. That's when I usually shut off my headlights and turn on the top inside light. But that can make them angry that I didn't "come down."

It is a nightly exercise that I have dubbed "come-down-advance-who-are-you-pass-through." Except that it's said a little more drunkenly, a little more excitedly, in very bad light, and much, much too often. I repeat my run-together phrase at dinner, and Olive and Brace laugh. Inga frowns and I say it slowly, then quickly again, and she too enjoys it.

I notice that there are often different soldiers and different guns. I also notice that they swing through the air in almost the same uncontrolled manner, but managing to aim at some spot on our windshield. Always.

Every week, there were more and more roadblocks set up. A thirty-minute ride to Port Harcourt began to take more than 90 minutes. Some roadblocks were within sight of others. They seemed to be manned by civilian militia, many of whom were prostitutes and young men who had not held any regular jobs before. Some of them had guns. That frightened us.

"Come down!" they shouted at us. They examined with great detail the women's purses, invariably holding up tampons in the air and asking what they are. The women were amused at first, then angry when it continued to happen.

Whole boxes were ignored, boxes that could have contained weapons or spy materials. The roadblocks, in other words, were jokes. Jokes we wished would go away, but which, instead, proliferated.

"If you come back quick when Nigerians liberate a place, they treat you fine-fine," says James as he slices some yam for our dinner. "They welcome me with big shouts and smiles," he continues. "Big shouts! And they don't forget! I see them on the road when I am walking here every morning. They greet me: 'Nigeria man!'" He giggles. "'Nigeria man!'"

"And if the Biafrans come back?" I ask.

"You eat yam in America, sir?"

"I don't think they eat yam in Britain."

"No, we don't eat this kind of yam in America."

John Sherman had been a Peace Corps teacher in the Eastern Region of Nigeria for nearly a year when the region seceded and became the Republic of Biafra. He spent his second year in the Peace Corps in Malawi, then returned to Nigeria to work with the Red Cross. War Stories is based on a diary he kept in the Red Cross, with flashbacks to his Peace Corps/Nigeria days. Sherman, now a resident of Indianapolis, is a freelance writer and the author of three books of poetry and two pictorial history books on Santa Fe and Taos.

How to Order the Book

The process is underway to distribute through bookstores and Internet sites, including Amazon.com. Books can also be ordered ($14.95, plus $3 shipping/handling per book, with 5% sales tax for Indiana residents) by sending a check to Mesa Verde Press, 4175 Central Ave., Indianapolis, IN, 46205. For further info, e-mail mesaverdepress@earthlink.net or phone 317-283-3330.

This story has been posted in the following forums: : Headlines; RPCV Authors; COS - Nigeria

JOhn's encounters with drunken Nigerian soldiers brought back a bad memory for me -- Same thing happened to me while I was hoisting a few in Badagary with an RPCV, W. Nigeria during the Biafran war. They dragged me out of the bar while my RPCV buddy ran out the back door to get help. As the solders were marching me to the barracks shouting unintelligible nonsense, a police jeep with my RPCV pal came roaring up, and the cop got me out of there. If that RPCV fella is reading this, sorry I can't remember your name, but thank you for saving my life that day in 1967 and send me an email so that we can chat-chat.

It s so far away that Idon t remember john's face but we must have met.I remember preparing the evacuation of remaining rpcv staff with a member of your embassy who came to onitsha where I was based.French based in onitsha I was living with a laura bennett whom I would love to trace .If John SHERMAN can help me I would be most gratefull