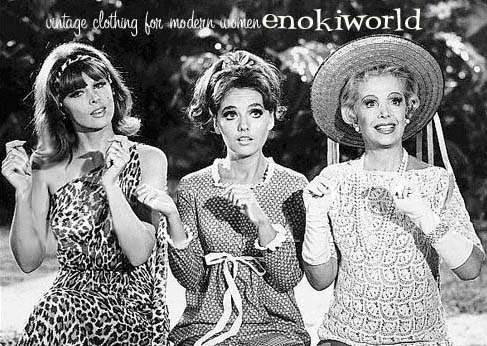 Read and comment on this story from the St. Louis Post-Dispatch on Kenya RPCV Steve Sachs who along with his wife started a web site to sell vintage clothing at enokiworld.com at:

ENOKIWORLD.COM ; THE LITTLE WEB SITE THAT COULD -- AND DOES*


ENOKIWORLD.COM ; THE LITTLE WEB SITE THAT COULD -- AND DOES

IN LITTLE offices tucked away on Delmar Boulevard, a University City couple operates a Web site widely regarded as one of the hippest spots in existence for buying high-end vintage fashion.

These clothes might make a fashionista weep: Here's an Yves Saint Laurent emerald satin skirt, there's a Missoni cashmere twin set, and don't forget that marble-print Diane Von Furstenberg wrap dress. It's not from the floor of a modern, ritzy department store -- though certainly it could be, as the heavy hitters are carrying Von Furstenberg again. No, this one is a storied one, a vintage one, a 1970s one.

Welcome to the headquarters for Enokiworld.com, the little Web site that could -- and does.

At first, the couple just liked to scour estate sales, picking up whatever appealed to them. When they collected too many things, they sold some of the items on eBay. They discovered their finds could command a pretty good price.

Over time, they decided to start their own Web site; they focused on ways to find and buy vintage clothing, and Enokiworld was born.

Since then, the site has caught on like a house on fire, earning rave reviews in fashion circles. A Vogue writer declared the clothing stock "amazing" and Meyerowitz's fashion tips "even more delightful." Us magazine said Enokiworld's vintage vaults can help readers get "the hip retro look favored by such Hollywood fashion plates as Gina Gershon, Chloe Sevigny and Winona Ryder."

"When I moved here from New York City, I thought the shopping situation left a lot to be desired," said Meyerowitz, sitting behind her desk, with concert posters on the walls around her, an illuminated woman's torso serving as a lamp on the floor, and a storage room behind her containing designs by the biggest fashion names of the 20th century.

And as Meyerowitz became more involved in fashion and the Web site, Sachs handled the financial end of things. "I do the creative stuff, and he does the business stuff," Meyerowitz said.

The site is doing well; as Sachs said, they don't have a house in Ladue from it, but they weren't expecting to.

The couple's differences seem to complement each other in their business. Meyerowitz grew up in New York City, but moved to the St. Louis area after she started dating Sachs.

She was a fine arts major at the School of Visual Arts in Manhattan and then worked as a professional chef. A fellow employee at one restaurant began calling her

Enoki (pronounced eh-NOH-kee), a nickname taken from a type of Japanese mushroom they cooked with, which eventually became incorporated into the Web site's name.

Meyerowitz, 36, is great fun to talk to, as she has strong opinions on clothing; she knows exactly what she likes, as well as what clothing she likes together. "I like things that are very representative of a designer, but really edgy," she said. "I get excited about Courreges, really good Halston, Rudi Gernreich."

She's referring to Andre Courreges, the French designer who worked for Balenciaga before opening his own house in the 1960s and was celebrated for "space age," futuristic designs and his pastel palette; American designer Halston, who developed a reputation for his knitwear, halter dresses and ultrasuede shirtwaist; and Gernreich, who made sportswear and separates, but is perhaps best remembered for a scandalous topless bathing suit and his innovative undergarment designs.

Sachs, on the other hand, grew up in this area. He got his MBA from Washington University, but he also served in the Peace Corps in Kenya and spent some time working with the family business, Sachs Electric Co. (It wasn't as though he had no familiarity with visuals; his mother used to own the local Nancy Sachs gallery.)

When we meet, Meyerowitz is wearing a Romeo Gigli black top with Ann Demeulemeester pants that read "Rescue a Fleeting Thought" down the side. She's got on painted Martin Margiela shoes, designed to deteriorate as the paint chips away from the surface. Her black Bonnie Cashin satchel with end pockets rests next to her desk, and a Victorian glass brooch decorates her blouse.

Her husband, on the other hand, is wearing a T-shirt and shorts.

And apparently he's come a long way in his fashion knowledge since the business started. These days he recognizes his Pucci, though that wasn't always the case. "I couldn't have told you if a woman was wearing a skirt and a blouse or a dress, much less who made it," he said. "I have developed an appreciation for the art and talent of a lot of these clothes. Beyond that, I'm not a particularly fashionable guy."

But Meyerowitz jokes that Sachs is becoming the perfect husband for someone else, should anything ever happen to her. "He's a heterosexual man who knows what a carburetor is, and he knows what Hermes is."

His wife certainly does, too. Meyerowitz credits her eye for fashion to her flamboyant older brother, who always loved clothes, even as a child. She said he would steal their parents' credit cards, head to Bloomingdale's and buy her the most expensive things. "I had the entire Halston and Calvin Klein makeup lines when I was 13. The packaging was so great."

She said her brother made sure his little sister knew the fashion score. He introduced her to the labels he loved, and Meyerowitz carried on the family tradition.

Later, when she found great vintage clothes, she had trouble not buying them. "It was kind of like a rescue mission. I was seeing things, and I worried it would get into the wrong hands," she said, gesturing toward the racks of clothes in the next room. "They're all like my children in there."

That early exposure must come in handy. Meyerowitz writes all the clothing descriptions, which more than one fashion magazine has gushed over, for the hip-looking Enokiworld Web site. Even J. Peterman might be jealous of her ability to turn a phrase.

She shows a Scott Barrie peignoir with a seashell print, comments on how more African-American designers such as Barrie ought to have name recognition, and then offers places to wear the nightgown: "Saturday mornings on the porch of your little rented cottage in Martha's Vineyard, sipping strong coffee from a porcelain bowl. Late Sunday nights at your boyfriend's parents house in Omaha, standing in the light of the open refrigerator, whispering to your honey in the dark."

In another description, she calls the pointed button cuffs and spread collar on a dress "about the most flattering thing you can put on curves, aside from a pink fox fur robe and a dab of Ma Griffe."

Phrasing like that has helped Enokiworld establish a reputation. Now Meyerowitz and Sachs are often contacted when someone wants to sell a collection of vintage designer clothes. Sachs is convinced there's more to be found in the region, but they say people have started to contact them from farther away. They think those people realize they have customers who will love the discarded clothes as much as the former owners did.

Meyerowitz certainly loves clothes that way, and jokes that she has to be careful, or she'd buy all of her own stock. The couple recently started selling some contemporary clothing as well, by designers whose clothes are hard to find.

But Meyerowitz says no matter what, she'll only carry clothes she believes in. "If I don't like the piece, I will not buy it. If I can't convey that sort of excitement, it's phony to me, so I just don't bother with it."

This story has been posted in the following forums: : Headlines; What RPCVs are doing; COS - Kenya

Dear Sirs,how can I get in touch with a former peacecorps member who lived in my town for 3 years?hee left in 1995.The country is Romania,town Alexandria,he was a teacher of English.I could not come in time to say good bye to him as he had asked me.His name is Tanner Christopher,born in 1967,Aurora state New York.he graduated from the University of Rochester,has 5 brothers and sisters and is catholic.Can you tell him about me and give him my e-mail?he knows who I am.
Yours miss Gongone Lily