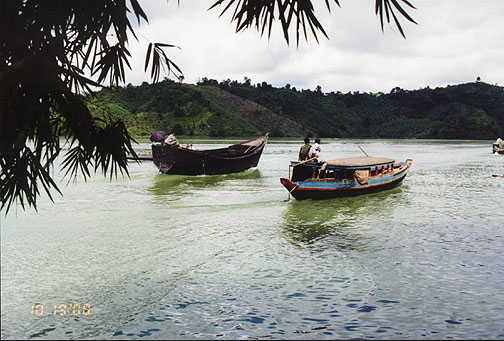 Read and comment on this press release from the Peace Corps that the Bangladesh program re-opened in August 2002 with two volunteers returning to complete their service and 11 new trainees. who will be sworn-in as Peace Corps volunteers in early October upon completion of training at:

WASHINGTON, D.C., Sept. 19, 2002-Peace Corps Director Gaddi H. Vasquez announced the return of the Peace Corps to the country of Bangladesh. In early October, Peace Corps will swear-in its first group of volunteers to work in Bangladesh after a year-long absence from the country.

The Peace Corps entered Bangladesh in November 1998. At that time, 35 trainees were sent to work in English teacher training and primary education. During the summer of 2001 and leading up to national elections in October, Bangladesh experienced a period of election-related civil violence. This violence, particularly in the wake of the terrorist attacks in the United States, presented potential safety and security risks for volunteers in Bangladesh. Peace Corps decided to temporarily suspend the program in October 2001. The program re-opened in August 2002 with two volunteers returning to complete their service and 11 new trainees. These new trainees will be sworn-in as Peace Corps volunteers in early October upon completion of training.

The Peace Corps is planning to send a second contingent of trainees to Bangladesh in February of 2003. The volunteers will work in the Youth and Community Development program and Teaching English as a Foreign Language (TEFL) program. A total of 79 Peace Corps volunteers have served in Bangladesh since 1998.

Since 1961, more than 165,000 volunteers have served in the Peace Corps, working in such diverse fields as education, health and HIV/AIDS, information technology, business development, the environment, and agriculture. Peace Corps volunteers must be U.S. citizens and at least 18 years of age. Peace Corps service is a two-year commitment.

This story has been posted in the following forums: : Headlines; Peace Corps - Overseas Programs; COS - Bangladesh

Excuse me. Peace Corps entered Bongladeish, then known as East Pakistan, in 1962 or 1963, one of the original Peace Corps assignments.

I was in PAK-9 and arrived there in late 1964, later being evacuated (and transferred to Iran) during the 1965 Indio-Pakistan war. As I arrived, the first groups were completing their successful tours.

I returned as a tourist in 1995, and was shocked at how successful my predecessors, early Agricultural PCV&#8217;s had been. The variety and quality of vegetables in &#8220;my&#8221; village bazaar was testimony to their efforts 30-years before. Their difficult assignment and successful efforts should not be flushed from the Peace Corps record.

we all have researched on bangladesh and i have personally concluded that Bangladesh is the best country that has best scenary in its countryside. espeacially towns like syhlet, dhaka.