Peace Corps in contact with all 133 volunteers in Ivory Coast

Read and comment on this press release from the Peace Corps that they have made personal contact with all 133 of the currently serving volunteers who are in Cote d’Ivoire, Africa at:

WASHINGTON, D.C., September 24, 2002 -- UPDATE 5:00 p.m. (EST) Peace Corps has made personal contact with all 133 currently serving volunteers who are in Cote d’Ivoire, Africa. All volunteers are being consolidated in case relocation from the area is deemed necessary. Peace Corps is working with the U.S. Embassy to continue monitoring the situation.

This increased communication comes after a rebel uprising in the country began last week where rebel forces have clashed with government forces in Abidjan, and the cities of Bouake and Korogho. For the immediate future, a 24-hour curfew is in place for Bouake and Korogho. A curfew continues to be in effect from 8:00 p.m. to 6:00 a.m. daily throughout the country.

According to the latest State Department report, there are approximately 2,300 U.S. citizens who reside in Cote d'Ivoire. There have been no reports of attacks against Americans, Europeans, or their property.

Family members may make inquiries about Cote d’Ivoire/Peace Corps volunteers from 8:30 a.m. to 5:00 p.m. by calling 800.424.8580, extension 1470. After hours, inquiries may be referred to the Peace Corps Duty Officer at 202.638.2574 or via email at ossdutyofficer@peacecorps.gov. Peace Corps continues to monitor the situation and regular updates will be posted as new information becomes available. 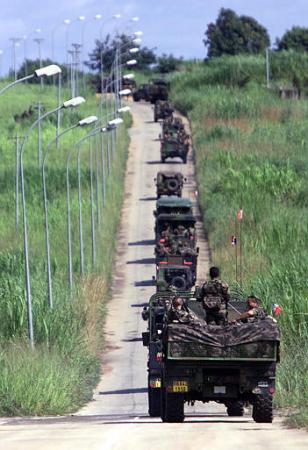 Caption: A convoy of French soldiers leave the airport in Yamoussoukro, Ivory Coast for a position closer to Bouake on Tuesday Sept. 24, 2002. French troops are ready to protect and if necessary evacuate foreigners in the standoff between rebel soldiers and loyalist troops in the Ivory Coast. (AP Photo /Christine Nesbitt)

Read and comment on the following story on the situation in the Ivory Coast from VOA at:

French troops have secured a missionary school in Ivory Coast where foreigners were trapped by fighting between rebel and government soldiers. French troops broke through the front lines of fighting in the city of Bouake Wednesday, to protect the school where about 100 American children and other foreigners have been confined since last Thursday when the mutiny began.

Missionaries said the students and teachers did not want to be evacuated because the presence of French troops made them feel safe. Sporadic fighting continued in Bouake Wednesday, as government forces tried to oust the rebels. American troops arrived in neighboring Ghana from Europe late Tuesday to assist in rescue efforts of foreign nationals, if necessary. A small British military team is also in Ivory Coast to determine if British troops are needed to help protect British nationals. Meanwhile in Abidjan Wednesday, hundreds of pro-government protesters rallied outside the French embassy. The group is angry at the former colonial power for providing refuge to opposition leader Alassane Ouattara. Mr. Ouattara says police tried to kill him when the conflict began.

Last Thursday, hundreds of disgruntled soldiers rebelled - called a coup attempt by the government - in three parts of Ivory Coast, including Abidjan. The government is in control of Abidjan. But the rebels still hold Bouake and another town in the north, Korhogo. At least 270 people have been killed in the uprising, including Interior Minister Emile Boga Doudou, and Ivory Coast's former military ruler, Robert Guei.

This story has been posted in the following forums: : Headlines; COS - Ivory Coast

i have resivet this bluff mail. with link to you site maybe you cot make a warning.:
her it is :
From: miss Coucou Doudou (jnr)

I plead with you for every embarassment my unsolicited
mail may bring to you due to the fact that,we do not
know each other and have not communicated before.I
hope i will be forgiven for my plea,however i feel
very pleased to come to you at this important time of
my life.I know you may be very much aware of the
continuous prevailing political problems going on in
cote d'ivoire here which began in september 19th 2002.

It is with regreth and deep sense of loss that i lost
my father who was serving under the president of this
country(president Laurent Gbagbo) as the honourable
interrior minister.My late father,Late Mr Emile Boga
Doudou was murdered in cold blooded by the mutineers
who staged a coup attempt to overthrow the present
government of this country which the troops loyal to
government later regaained control.As of the period
this sad incidence occured,i was in school in
Accra,the Ghanian capital where i'm doing my degree
course in geography and urban planing faculty of
social sciences at KWAME NKRUMA UNIVERSITY before the
tragic news of my father was broken to me.

I am rightnow contacting you to ask for your sincere
help to help me establish a very good
industry/investment in your country,but before then,i
hope you will never betray the honour and trust i am
about to repose on you.As i returned home for the
internment(burial) of my dead father,my mother has
declared to me as the only daughter of the family a
particulars inciting a deposit of $7.3 million dollars
which my late father had in mind to open a fish
industries in malaysia at the time of his retirement
from civil service.This fund was deposited by my late
father in a safe and depository security and finance
company here in Abidjan,but i directed the depository
company to move the consignment immediately out of
cote d'ivoire to their office abroad(name withheld for
security reasons).I need your humble and sincere
assistance to help me in the investment of this fund
as i have no single idea in the world of commerce,but
our first objective will be to retrieve the
consignment out from the depository company to your
control.Meanwhile,the company staff never know the
real content of the boxe as it was registered as
carrying family effects/propertry.For futher
informations of my points,kindly make out a time and
visit this websites below


I want you to keep every informations regarding this
fund very confidential and secret and let me know how
you would like my faimly to compensate you as regards
to your commission/percentage for offering us this
assistance.Let me have your direct phone No for easy
communications.Looking forward to recieve your
response for us to proceed.