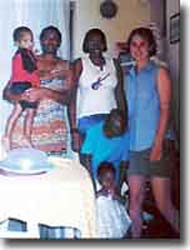 Read and comment on this story from Kenai Peninsula Clarion on Cape Verde PCV Emily Rhyner and how she writes letters about her experiences with the Peace Corps and about life in Cape Verde. In turn, the students at Mountain View Elementary School write back -- providing her a taste of home and letters to share with the African children she's working with.

Caption: Emily Rhyner, right, poses with her host family in Cape Verde, off the western coast of Africa.

Do you know where Cape Verde is?

Most people probably can't answer this question, but the fourth-graders in John and Bernie Wensley's classes at Mountain View Elementary have no trouble with the query.

The cluster of islands off the coast of Senegal in western Africa is a key part of the students' curriculum -- and the new home of their pen pal, Emily Rhyner.

Emily, a former Mountain View student herself, is a 1998 graduate of Kenai Central High School and recently received a government degree from the University of Notre Dame in Indiana. She is spending the next two years in Cape Verde working with special education with the Peace Corps.

Throughout her adolescence, Emily volunteered with autistic children, taught Sunday school, worked at a summer camp for adults with special needs and spent time at a hospice in Anchorage.

Continuing to serve after college was a natural choice.

"Notre Dame is big on community service," said Bernie. "About 10 percent of graduates go into service, from Habitat for Humanity to Vista to the Peace Corps."

But even dedicating two years of her life to volunteering in an African country wasn't enough for Emily -- she also wanted to do something for youth in Alaska.

That's why she hooked up with the Wensleys. John and Bernie, both longtime teachers in the Kenai Peninsula Borough School District, live down the street from the Rhyner family and have known Emily and her two sisters for years.

When Emily proposed communicating with the teachers' classes from Cape Verde, the couple jumped at the chance.

"It's an opportunity for the students to see a successful graduate from the Kenai school system helping other people and to learn about the cultural things," Bernie said.

People in Cape Verde, off the western coast of Arrica, enjoy the island beaches. Emily Rhyner, a KCHS graduate, is living in Cape Verde as a Peace Corps volungeer and sharing her experience with fourth-graders at Mountain View Elementary via leters.

Emily writes the classes letters about her experiences with the Peace Corps and about life in Cape Verde. In turn, the students write back -- providing her a taste of home and letters to share with the African children she's working with.

"Emily has a youthful enthusiasm,"John said. "We're hoping the kids will pick up on that and say, 'Look how much fun she's having doing kind things and being an altruistic person.'"

Emily already has written two letters to the classes. In the first, she introduced herself, her Kenai family -- her dad, Tom, a substitute teacher, her mom, Mary, a postal worker, and sisters Tessa and Laura -- and her Cape Verde family -- mom, Isabelle, sisters Karini and Denisi, brother Geson and niece Jelisa.

She also introduced the islands of Cape Verde -- where fish is a staple but served with the heads attached, roads are made of cobblestone or dirt, mountains surround the town, but without any snow, and the official language is Portuguese, but people speak Kriolu.

In her second letter, Emily told the students about her Peace Corps project -- working with special education. In Cape Verde, children with trouble learning, hearing or seeing don't get extra help, she wrote.

Her job, she wrote, is to "help schools and families make life easier for these kids."

Last week, students in the classes finished drafting letters back to Emily. Using her first letter as an example, they practiced introducing themselves, then plied her with questions about life in Cape Verde.

As students wrote about their families, pets and hobbies, they asked Emily about pets, sports, books and interests in Cape Verde.

"I'm 9," wrote Renetta Hensler. "I know girls don't like to tell how old they are, but how old are you?"

"I wonder if I'll ever go to Cape Verde," wrote Isaac Cryer.

A few students went even further.

"In the U.S., we have freedom. Do you?" wrote Courtney Parker. "Today we were talking about the World Trace Center. It's sad. Do you think about that?"

"I think it's really neat that you joined the Peace Corps," wrote Lincoln Wensley, a student and the Wensleys' son. "It's really nice to help people in need."

"You can see them wondering, 'If I was in her shoes, what would I find challenging?'" Bernie said.

The students will continue exchanging letters with Emily throughout the year, and possibly into their fifth-grade year.

"I haven't heard of Cape Verde, so it will be fun to learn about it," said Michael Wallace.

"With every letter we send, we get to see what's going on," added Rebecca Satathite.

This story has been posted in the following forums: : Headlines; PCVs in the Field; COS - Cape Verde

I am a Kindergarten teacher in a small farming community. Each year I teach a unit on Africa. We learn about the different environments, animals, foods, languages, etc... I was wondering if you could possibly help me to arrange a pen-pal letter exchange with an African class of similiar aged children.

Thank you for your time and assistance.

I'm a man, 26years old, From Morocco ,I want to know more about your Organisations.& its aims.
I'm interessted because a girl (volunteer in your organisation)asked me to help her in talking my mother tangue(tashelhite)...
I'm waiting for your reply

i AM EDWARD WILSON A GAMBIAN 27 YEARS PRESENTLY DOING STUDIES ON DEVELOPMENT. I WILL LIKE TO CORRESPOND WITH ANY MEMEBER OF THIS ORGANISATION.FROM Wardson82@yahoo.co.uk