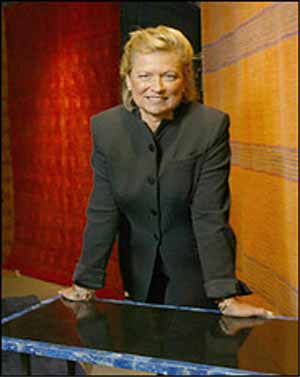 Read and comment on this story from the New York Times on Fiji RPCV Stephanie Odegard shown in the photo above who is known for her designs for modernized Tibetan rugs, which cover the floors of the J. Paul Getty Museum in Los Angeles, Restaurant Daniel in New York and the homes of Christy Turlington in New York and Robert Redford in Aspen, Colo. Read the story at:

THIS month, as many of Stephanie Odegard's Upper East Side neighbors were straggling home from a summer of traffic and crowds in the Hamptons, she was returning to her one-bedroom apartment on East 90th Street from Kashmir, a war zone of an entirely different magnitude.

Ms. Odegard, 53, who is known for her designs for modernized Tibetan rugs, which cover the floors of the J. Paul Getty Museum in Los Angeles, Restaurant Daniel in New York and the homes of Christy Turlington in New York and Robert Redford in Aspen, Colo., did not go to Kashmir as a tourist. She was on the sort of one-woman mission that has characterized her career.

"I hadn't been in Kashmir for years, and I was really shocked by how bad things had gotten," she said last week, speaking of the flare-up of hostilities between India and Pakistan over that Muslim region, part of which is controlled by India as the state of Jammu and Kashmir.

Sitting in her apartment, Ms. Odegard was surrounded by her own carpets mixed with modern furniture, including a Le Corbusier chaise lounge and a Thonet table. But the objects and textiles she has collected in Asia over the years are largely from the 17th and 18th centuries, including a Tibetan painted box (traditionally used to hold ritual butter sculptures) and ancient Japanese robes.

The bits and pieces of fabric and artwork form a virtual road map of the 25 years she has spent helping third world artisans make beautiful things. She does it because she believes that some day the making of handicrafts may resuscitate their disintegrating societies.

As she has done for decades, Ms. Odegard conducted this business trip amid rubble. She flew into Srinagar, the summer capital of the Indian state, where she had an appointment with the head of a small weaving collective. He had cashmere and valuable Kashmir saffron to use as a dye but didn't know how to do the dyeing.

Ms. Odegard carried some of the cashmere and saffron back to one of her four rug factories in Nepal, so that samples of the yarn could be spun and dyed by her craftsmen. The collective is now making saffron-dyed shawls, which Ms. Odegard plans to sell in January from her carpet showroom in New York for $500 each and up, with at least half going back to the weavers.

The trip was a small effort by her standards. Her company, Odegard Rare and Custom Carpets, and her life are built on the twin foundations of good deeds and good business. Thirty years ago, when most designers of her generation were at art schools or apprenticing in ateliers in the East Village, Ms. Odegard, a former department store buyer, was a Peace Corps volunteer in Fiji, assigned to helping crafts merchants make their wares attractive to Western buyers. (Growing up a Lutheran in Minneapolis, she had wanted to be a missionary.) She stayed in the nonprofit world for more than a decade, working for the World Bank and the United Nations as a consultant on improving indigenous crafts in places like Jamaica and India.

In 1987, after a posting in Nepal, Ms. Odegard, who has no formal design training, went into business in New York, arranging to make high-end Tibetan carpets in Nepal, with the work overseen by Tibetan refugees. (Most Tibetan carpets, prized for their lanolin-rich wool from sheep that graze in the Himalayas, have been made in Nepal since 1959, when the Chinese annexed Tibet.)

Ms. Odegard started her company as a way to prove an economic theory. After years in the third world, she was convinced that the best way to raise the standard of living was to produce high-end crafts. That project would take more skilled, higher paid workers. The World Bank had tried to achieve the same end, but through grants. "Stephanie really bucked that trend and she was incredibly dogged," said Nancy Barry, who was the World Bank program director when Ms. Odegard was there, and who is now the president of Women's World Banking, a New York-based organization that makes small loans to third world entrepreneurs.

Then Ms. Odegard set about reviving the market for Tibetan carpets, which typically had borne tribal motifs, making them too busy for elegant interiors. "I had been teaching people in Nepal to make good carpets, but I couldn't find anyone to buy them," she said.

She decided to give her Tibetan carpets a new look by paring down the motifs and using antique Asian textiles as an inspiration, and she increased the knots for a square foot to a sleek 100 from the traditional 50 or 60. She also developed new dyes to add richer, more modern shades to the palette.

Starting in 1987, with an East 22nd Street apartment she used to lived in as her showroom, she has built her business into a company with $10 million a year in sales. After a rocky start — her company nearly went bankrupt in 1993 — she found her niche, selling these lush yet minimalist carpets to interior designers and architects who didn't balk at 8-by-10-foot carpets for $5,000 to $20,000.

"She worked very hard to get the right people to see them," said Sherri Donghia, the design director of Donghia Furniture and Textiles, who has for years used Ms. Odegard's carpets in the displays she creates in her own showroom. (Ms. Donghia has begun designing a collection for the Odegard label.)

"She encouraged you to put your face into the carpets to see the dyes and how much life there is in them," Ms. Donghia said. "She made you see that there's real soul in the products."

Ms. Odegard's persistence paid off: her carpets got wide play in magazines after they were chosen for the Getty Museum in 1997 and for the Phillips Collection, the museum in Washington, in 2000. David Rockwell, the New York architect, began using Ms. Odegard's carpets in his projects as well, including the rooms and the mezzanine of the Chambers Hotel, which opened last year. "She's completely modern without being minimal," Mr. Rockwell said. "There's complexity and depth to everything she makes."

Ms. Odegard is now among the biggest importers of Tibetan carpets to the United States, where some three million square feet of Tibetan carpets were imported last year, according to the Central Carpet Industries Association, a trade group in Nepal. In 1985, Americans imported 70,000 square feet of carpet from Nepal. The market's growth, which began in the mid-90's, can be at least partly credited to Ms. Odegard. A glance inside any design magazine shows ads from more than a dozen boutique-size Tibetan carpet makers, few of which were in business a decade ago.

Jack Lenor Larsen, the fabric designer, acknowledged Ms. Odegard's contribution: "Stephanie created the market for Tibetan carpets as an element in contemporary design. Now they're everywhere, enormously important. That's entirely because of her. She was the first to do it, and she was alone doing it for many years."

Ms. Odegard now works from a 15,000-square-foot showroom at 200 Lexington Avenue. The four Nepali-owned factories where her carpets are made employ more than 10,000 workers. Next month she will open Paradeisos International Design Studios, a 30,000-square-foot, three-building complex designed by Alison Spear in the Miami design district. There, she will focus on an expanded line of her designs, including jewelry and fabrics.

At home, Ms. Odegard seems a particularly unlikely type to have spent her life muscling her way into the American rug market. If she is pugnacious, she hides it behind a gentle facade, calm blue eyes and a wardrobe of handmade linen and draped wool. She is the largest American financial supporter of Rugmark, an anti-child-labor organization, to which she gives 1.7 percent of the selling price of her rugs ($60,000 last year) and a third of her time. She contributes at least $100,000 more to initiatives of her own, like building a school in Katmandu.

But when she speaks about her social agenda, she has no canned human rights spiel. When she mentions the carpets underfoot, which she changes every few months — "to get to know all of them, really deep down" — she reflexively leads the conversation back to the skill of the weavers and how the factory owners she works with have become enlightened about child labor.

"It's hard for me to talk about myself in any sort of reflective way because I've never had the time to even think about it," she said. "Some people have a totally formed idea of where they're going from the beginning, but I didn't. I really thought I would just go back and forth and help a few people. I had no idea it would turn into this."

Although she spends much of her life on the road, mainly in India and Nepal, her Upper East Side apartment serves as a place to retreat from what she calls the "soul-draining energy" of New York and as a casual warren for her collection. This year, after friends chided her about her small apartment, Ms. Odegard, who is single, purchased the apartment below hers to make an 800-square-foot duplex. But she has not found the time to start a real renovation.

In one corner there are some pieces of Murano glass, and above an artfully worn Chesterfield couch there is a painting by Chucho Reyes, a Mexican painter who worked with Luis Barragán in the 1920's, but most of Ms. Odegard's pieces are crafts from cultures she has seen up close.

"I see more than just the objects, I see the people who made them," she said. "It's like looking at a Gauguin painting and wondering what those women in Fiji or Tahiti were thinking. I know what they were thinking."

This story has been posted in the following forums: : Headlines; What RPCVs are doing; COS - Nepal; COS - Fiji

I'm glad to know about that you're doing carpets(rugs)business and have the pleasure in sending this e- mail.

We have got your address through INTERNET.Now firstly I would like introduce myself.My name is Manoj krishna Amatya and I'm a Managinng Director of Amatya M. International,Kathmandu Nepal.We are manufacturer and exporter of handknotted woollen carpets.We export most of our products in UK, Germany,USA and Switzerland.

We prefer suppling our goods against L/C or advance payment to our buyers.
We have excellent exclusive quality with verious product of rugs such as 60knots,super60knots,80knots,super 80knots,100knots with silk mixed,hemp and Alo etc.and will make as your require quality and sizes goods.Our prices are very competitive.

We shall be glad to receive your reply with order or sample order or any information to establish our business relationship.
If you need the tender & sample deatails of our productions please inform us.
Hoping to hear from you soon