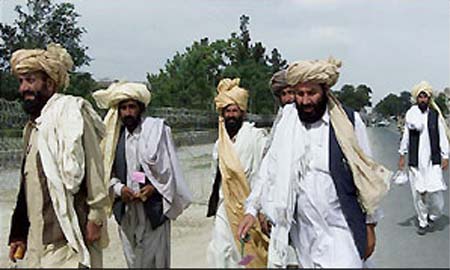 Read and comment on this story from the Idaho State Journal on India RPCV Nancy Hendricks who worked in Afghanistan as as an elections monitor to help stage the new government’s first elections since the U.S. ousted the Taliban. Her mission and that of other United Nations workers was to aid Afghanistan citizens of different ethnic groups, tribes and religions in selecting leaders for the new government. They did this through a “Loya Jirga,” which is an Afghan tribal council that has legislative and juridical authority. Read the story at:

The sound of security helicopters was a constant background noise as chosen delegates of war-ravaged Afghanistan gathered in the capital city of Kabul to rebuild their government.

Nancy Hendricks spent two and a half months listening to the helicopters circling overhead. Hendricks served this summer with the United Nations Assistance Mission to Afghanistan and worked to stage the new government’s first elections since the U.S. ousted the Taliban for harboring terrorists believed to be responsible for the Sept. 11, 2001, terrorist attacks on America.

“I love helping people,” said Hendricks who started her career as a Peace Corps representative in India for two years when she was just 20 years old. “It’s totally thrilling and exhausting.”

In her time in Afghanistan, she worked in many capacities, starting first as an elections monitor and ending as manager of operations.

Her mission and that of other United Nations workers was to aid Afghanistan citizens of different ethnic groups, tribes and religions in selecting leaders for the new government. They did this through a “Loya Jirga,” which is an Afghan tribal council that has legislative and juridical authority.

Hendricks’ life in this period consisted of working 14 to 18 hours each day and taking only one day off from April 30 to July 10. But these long hours were worth it to her, she said. She saw families reunited as refugees came home and found their loved ones.

Even with these reunions, though, remnants of decades of war littered parts of Kabul, which was the center of the historical election process. Devastation was evident, from crumbling buildings to carcasses of warplanes.

“There is so much to catch up on there,” she said as she showed slides of the Kabul airport to about a dozen people gathered in a small classroom on the Idaho State University campus. She explained the area surrounding the airport is still embedded with mines.

Hendricks spoke to a Women’s Studies class at Idaho State University August 28. She detailed her trip and the efforts to restore Afghanistan.

“I thought it was really great to listen to her first hand experiences,” said 18-year-old Jessica Kline, a freshman at ISU.

At the beginning of her trip, Hendricks stayed in a hotel that was once used by the KGB as a detention unit. The hotel had white-painted steel bars covering entryways and windows. When the Taliban was still in power, no music could be played in the rooftop restaurant, but things are changing.

Hendricks witnessed small, but important changes throughout society. Men danced in circles with music blaring and men were allowed to trim their beards. Meanwhile, many women walked the streets without chaudris, or head coverings. Some were even attending college classes.

These changes came in the midst of the clamor surrounding the election of the new government — something Hendricks said many wanted to be part of.

“It was so positive,” she said. “Everyone from taxi drivers to office workers knows that this is their last really good chance to have a democratic government. They believe in what is going on now.”

When she arrived on a small, eight-seat plane to Kabul, the country was in the midst of the election process.

Initially she worked to compile one 50-page report each day that detailed the elections progress for the UN.

Soon, though, her duties changed and she was assigned to be a women’s liaison officer. Of the 1,501 delegates, 180 were women and 20 of those were elected.

Shortly after a new president, leaders and a new form of government were decided on, and the delegates were flown out of Kabul back to their homes. Hendricks’ short-term contract ended, and she too came home.

The Pocatello resident reflected on her experience and why she wanted to do something like she did in Afghanistan.

“All of my life, I’ve wanted to know what’s on the other side of the hill,” Hendricks said at the end of her talk. “This gives me that chance.”

Hendricks isn’t new to traveling abroad; in fact, she has lived in various parts of Central Asia and India.

Last year, she was part of an international volunteer effort to oversee Kosovo’s first-ever provincewide democratic elections as the international polling station supervisor. Before that from 1995 to 1999, she monitored human rights conditions in the former Soviet republic of Tajikistan.

And now, she is trying to get another human rights job that would put her back in Afghanistan. She is also sharing her life experiences with university students.

Alana Wojciechowski, a 24-year-old freshman at ISU, said she was impressed by Hendricks’ experiences.

“At parts of it I almost wanted to cry,” she said. “I’m glad that everything is turning around, but it sounds like they still have far to go.”

Tanna Barry is a general assignment reporter at the Journal. She can be reached at 232-4161, ext. 241, or by e-mail at tbarry@journalnet.com.

This story has been posted in the following forums: : Headlines; What RPCVs are doing; COS - India; COS - Afghanistan

This is Avinash Vaidya from Ahmedabad Gujarat India...

If you are the same India RPCV who was in Ahmedabad please reply me on rekhavinash@yahoo.com