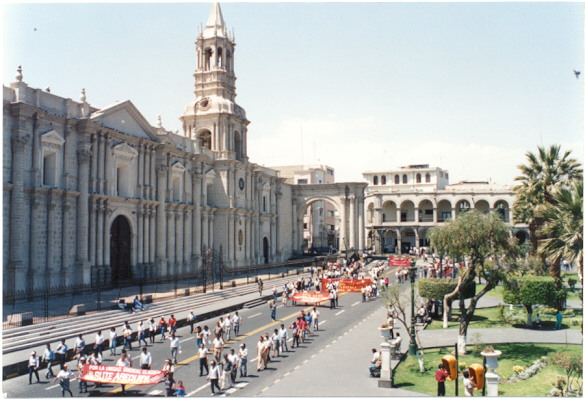 Read and comment on this story from the West Allis Star on Peru RPCV Richard Muirhead who leads athe West Allis Rotary Club that works with Center of Friendship in Arequipa Peru at:

Circle of friends Rotary members among those to embrace Peruvian town*


Circle of friends Rotary members among those to embrace Peruvian town
Oct 17 2002 12:00AM By Jim Livesey Staff Writer

In Arequipa, Peru, "Every step you take kicks up a pile of dust," the Rev. Alex Busuttil told his friends at a recent meeting of the West Allis Rotary Club.

Busuttil found many piles of dust when he first arrived in Arequipa nearly five years ago. The Catholic priest, who once worked with Mother Teresa, also found a community of children, their parents and the elderly in dire need of assistance.

Through the efforts of the West Allis Rotary Club, as well as individuals and organizations throughout southeastern Wisconsin, Busuttil is finding Wisconsinites who are committed to reaching out to the people of Arequipa.

"All roads from Milwaukee seem to lead to this guy," said Rotary member Richard Muirhead, referring to Busuttil and his work.

Muirhead, director of international studies at Mount Mary College, has visited Arequipa often. He served in Peru during a stint in the Peace Corps and his wife, Isabel, is originally from Arequipa. This summer, students from Mount Mary will travel to Arequipa to do volunteer work at Busuttil's mission, Muirhead said.

The West Allis Rotary Club has had a close relationship with the Arequipa Rotarians, including Busuttil, for the past several years. In July 2001, a delegation from Arequipa visited West Allis, taking in the city's Fourth of July parade and other events, and staying in the homes of local Rotarians. At that time, the West Allis club donated $2,000 to assist the Peruvian town as it recovered from a devastating earthquake.

A delegation of West Allis Rotarians that visited Arequipa in November was impressed with Busuttil's efforts to create a community center in the town. Since he arrived in Arequipa, Busuttil has been working with the town people to build Central de Amistad, or Center of Friendship, which now includes a community hall, church, computer classrooms, and childcare and health centers. Donations from the West Allis Rotary Club have helped turn Busuttil's vision into reality.

"You people have done so much good in Arequipa," Busuttil told the Rotarians.

Muirhead said students and instructors from the Milwaukee Area Technical College West Campus have been involved with Busuttil's work in Arequipa as well. After visiting Busuttil's program with a delegation of MATC students, the late Richard Potter, who was an instructor and administrator at MATC, returned to Arequipa to help after the earthquake. During his visit, Potter suffered a heart attack and died. Potter's family and friends decided to designate memorials in his name to Busuttil's mission, resulting in a contribution of more than $10,000 to support his work.

The roughly 25,000 people who populate Arequipa and 35 settlements in the surrounding mountains live simply and always seem to be smiling, Busuttil said, despite abject poverty.

"Perhaps they've discovered the secret of happiness, no?" he said.

What Americans might consider necessities, however, are rare for the majority of people in Arequipa. When he first arrived, the need for a child care was one of the most glaring, Busuttil said. In Arequipa, both mothers and fathers must often work to earn enough money just to put food on the table, he explained. But because many parents cannot afford child care, they were leaving young children alone in their simple huts, sometimes padlocking the children inside in an attempt to keep them safe. Without proper supervision of those children, the results were tragic.

"The need (for child care) was very strong because we had a great number of children dying," Busuttil said.

Some children died when the huts caught fire, he said, others from drinking kerosene or from accidents that could have been prevented by having adult supervision. Today, the community's childcare center serves about 80 children, offering them nutritious meals, clothing and medical services. A nurse, physician and psychologist help tend to the physical and psychological issues of children and their parents, Busuttil said.

The health center, which has been open for about one year, stresses preventive medicine and includes pediatric and obstetric services, a laboratory and pharmacy. Muirhead said work at the center has been supplemented by healthcare professionals associated with the nondenominational Medical Ministries International.

Maggie Byers, formerly of Columbia Hospital, represents another Wisconsin connection to the Central de Amistad. Muirhead said after visiting Arequipa, Byers gave up her medical practice, sold her home and moved to Peru to help at the health center.

The Central de Amistad has also focused on providing meals for Arequipa's elderly population, feeding about 100 elderly residents every day. Volunteers from the center go out to visit many of the older people in Arequipa and help with household chores. The human contact is important, Busuttil said, "because the biggest problem out there is loneliness -- loneliness, in fact, kills people. Most important, (the visits) keep the elderly in touch with us at the center."

Young people in Arequipa are learning computer skills at the Central de Amistad. At the moment, the center has eight computers and offers eight classes every day. Busuttil is hoping to add at least four more computers soon.

Now, the center is turning its attention to help women in the Arequipa community, teaching them language skills and offering job training. When Busuttil addressed the Rotary Club, he said the center was hoping to purchase several knitting machines, so that women in Arequipa could produce more sweaters for export and increase their household incomes.

Several Rotary members rose to that challenge, personally donating enough to purchase three knitting machines at about $550 each. At a dinner at Mount Mary College just a few days later, Busuttil accepted additional contributions, which will allow him to buy another five machines.

Muirhead said Busuttil has been training the people of Arequipa to run many of these programs themselves, so that someday they will become self-sufficient. In the meantime, though, Busuttil is grateful for the many volunteers and friends from Wisconsin who are contributing time and resources to help the individuals and families he serves.

"The ability to do these things is in every one of us," Busuttil said. "All it takes is a decision to go out there and do it."

"You people have done so much good in Arequipa."

The Rev. Alex Busuttil spoke to the West Allis Rotary Club recently, to encourage it to continue its support in helping residents of Arequipa, Peru. The club donated $2,000 to assist the town after an earthquake last year and a delegation of Rotarians visited Arequipa in November.

This story has been posted in the following forums: : Headlines; What RPCVs are doing; COS - Peru

Dear Sirs,
As a former member of one of the Rotary Clubs in Arequipa (1989+) I ask for help. I have lost contact to all my former friends and would like to have e:mail adresses to members in order to get in contact.