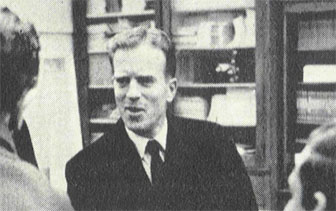 Mr. Chairman, Ladies and Gentlemen of this distinguished Committee, thank you for the opportunity to testify before you today representing the Committee for the Future of the Peace Corps. We are grateful to the Committee’s positive response to our unprecedented request to have our voices heard the - voices of the Peace Corps Family. The Committee is made up of thousands of Returned Peace Corps Volunteers, former staff, concerned citizens, friends and their families from across the country and around the world who have come together to form this distinguished Committee to oppose the nomination of Gaddi Vasquez as director of the Peace Corps because he does not posses the qualifications, leadership tools or the demonstrated financial management skills to head a large federal agency. We are a non-partisan group representing the Peace Corps family.

The Senate Foreign Relations Committee has had, through the centuries, the responsibility of deciding weighty questions related to America’s place in the world and its relationship to its neighbors, friends and adversaries around the globe.

Today’s discussion is no different. Whether to confirm a President’s nominee as Director of the Peace Corps is among the most important decisions this Committee can make.

As a former Director of the Peace Corps and retired Ambassador to Colombia under President Nixon, and as someone who was fortunate enough to be at the creation of what many people believe to be one of the finest example of America's foreign policies, I want to voice my grave concern to you about President Bush's nominee to be the new Director of the Peace Corps, Gaddi Vasquez.

Today, the mission of the Peace Corps is more urgent than ever, and more difficult. The new Peace Corps Director must possess a depth of knowledge about the democratic and economic transitions in the countries where Volunteers serve served. The director is the key person, not only repositioning the Peace Corps to play new roles in the transitions underway in country after country, but in inspiring Volunteers and staff to the maximum effort. It is in this context that the President and this Committee need to work together in identifying and confirming the best possible leadership for the Peace Corps. This nomination is incompatible with a forward vision of the Peace Corps.

These are the qualities--along with the stature to inspire confidence inside the U.S. and around the world--that President Bush must insist on in the person who will direct the Peace Corps in the age of terrorism. The President has chosen wisely an experienced team of leaders in the Vice President, Secretary Powell, Advisor Rice, to meet the current foreign policy challenges of our nation. Why not a demonstrated leader of equal caliber, experience, skill and intelligence for the critical role of Peace Corps Director?

Volunteers dedicated to peaceful change are vital in any effort to improve both the appearance and substance of U.S. involvement overseas. All they need is an experienced and knowledgeable Director, someone with both the skills and experience combined with the commitment they bring to each country to promoting peace in the world.

“To truly win a war against terrorism, the Bush administration should beef up the Peace Corps and launch a new version of America's post-World War II policy that rebuilt shattered Europe and Japan.”

That's the advice a retired Pakistani diplomat offered at a Caldwell College forum two weeks ago as he explained how stressed Third World societies can produce murderous hatred. . .

Along the same lines, he said, America is widely admired in the Third World for the work of the Peace Corps Volunteers. That agency's assistance to people at the village and neighborhood level should be greatly expanded, he recommended. “

This statement, it should be noted, is from a former Pakistani diplomat. And he is not alone. Walter Cronkite, in response to David Letterman's question of "What can we do?" just after the September 11 attacks, answered, "Join the Peace Corps!"

I believe the Peace Corps needs a Director of stature with a demonstrated record of sound personnel and fiscal management combined with competent leadership. There are over 7,000 Peace Corps volunteers living and working in 71 countries with a budget of over $265 million dollars. The Director must bring to the agency the fiscal management experience necessary to run a large organization along with an acute understanding of global affairs.

Unfortunately, Mr. Vasquez is not that person.

a.. He has not demonstrated financial management capabilities—he oversaw the largest bankruptcy this country has ever seen costing taxpayers of Orange County $1.7 billion. As Supervisor of Orange County, CA, he was responsible for the financial ruin of one of our country’s most affluent communities. His financial improprieties disqualify him even for consideration as a Peace Corps Volunteer—how in the world then can such a person be put in charge of this complex organization?

The Securities and Exchange Commission Report of January 24, 1994 states, “In this case, the Supervisors approved Official Statements that, among other things, failed to disclose certain materials information about Orange County’s financial condition that brought into question the County’s ability to repay its securities absent significant interest income form the County Pools. The Supervisors were aware of material information concerning Orange County’s financial condition; this information called into question the County’s ability to repay its securities. Nevertheless, the Supervisors failed to take appropriate steps to assure disclosure of these facts. In light of these circumstance, the Board members did not fulfill their obligation under the antifraud provisions of the federal securities laws in authorizing the issuance of the municipal securities and related disclosure documents.”

Mr. Vasquez resigned from the Orange County Board of Supervisors after a recall effort was initiated in 1995 and after Orange County filed for bankruptcy – costing local taxpayers $1.7 billion dollars and leading to the indictment of two of his colleagues.

In addition, during his tenure on the Board of Supervisors, Mr. Vasquez voted against allowing individuals with HIV/AIDS to gain access to public housing. As Peace Corps Director, Mr. Vasquez would be in charge of one of the world’s largest international AIDS education programs.

Mr. Chairman, we are aware that several groups have declared their support for Mr. Vasquez’ nomination, but we hold such support suspect in light of Mr. Vasquez’ record. We wonder if these backers would be so exceedingly generous with their support if Mr. Vasquez were being considered to head their organizations. We also doubt if any of these organizations or each congressional office has a budget of $265 million a year to manage?

We recognize President Bush’s right to nominate a candidate of his choosing to head the Peace Corps and we applaud him for recognizing the need to include Hispanic Americans among his appointees. But we ask that an alternative to Mr. Vasquez be nominated for Peace Corps director and we ask that the nominee have the same stature and credentials as the President’s foreign policy team now in place.

Give the Peace Corps a leader with the vision of a Sargent Shriver, give then a leader with the compassion of a Loret Miller Ruppe, given them a leader with the fiscal background of a Paul Coverdell, and they will receive the direction and support to continue the good work with the same skills and talents and dedication of the over 162,000 Volunteers who have already served our country without pay, without fanfare, and without regret in over 135 countries of the world.

Again, who has done more than Peace Corps Volunteers to promote global peace by fighting poverty, ignorance and disease? As Loret Miller Ruppe often said, “Peace isn’t the absence of war –it is the absence of the conditions that cause war - poverty, hunger and disease.”

As a Republican who has served his Party and his Country equally, it pains me to no end to sit here before you today in opposition to a fellow Republican nominated by a Republican President.

This is neither the place nor the time for on-the-job training in exchange for a $100,000 political party contribution. This is the time for a director of the Peace Corps to bring significant international and fiscal management experience and who can rally the good will and desire of a new generation of young people, and others, including, men and women like myself who are willing to do something for their country.

In the aftermath of September 11, everything in American life has changed. What has not altered is the basic mission of the Peace Corps, but the Peace Corps will have a forward vision. For 40 years, 162,000 Peace Corps Volunteers have given 300,000 years of service and used their skills and training in over 135 countries speaking 330 languages to promote development and seek understanding in the world. Then they “bring the world back home” to teach Americans what it means to cross cultures in the name of peace.

From deep personal experience as the second director of the Peace Corps, I can promise you, the Senate, and the president that if he were to say to this so-called Nine-Eleven Generation, "America needs 20,000 young people to join the Peace Corps today, with 500 going to Afghanistan after rigorous selection and training," that the White House Mail Room could not handle the volume of mail it would receive.

It must be hard being young today. The Peace Corps, and, more importantly, Peace Corps Volunteers proudly serving our country overseas, deserve a director worthy of a their commitment to “Toughest Job you Will ever Love!”

FINALLY, again, I urge you to vote against Mr. Vasquez for director of the Peace Corps based on his lack of demonstrated financial management ability, his lack of foreign policy involvement, and his lack of large-agency management experience.

We, The Committee for the Future of the Peace Corps, again thank you for the unprecedented opportunity to testify here today. We want to assure you that we will continue to mobilize thousands of people in the Peace Corps family who are concerned about the future of this agency. We will work cooperatively and in the volunteer spirit with whoever is finally confirmed as agency director. But Peace Corps Volunteers – and America as a whole – deserve a skilled and experienced director of equal caliber to the President’s foreign policy team than Gaddi Vasquez in this time of international crisis, economic challenge, and global opportunity. Thank you.

Here is the statement by Director Jack Vaughn to the Committee opposing Gaddi Vasquez:

Please note that this is the written statement submitted for the Committee Records and is not necessarily what was said during the hearings.

Hooray for Amb. Vaughn. He has spoken with the conviction of a true Marine, which, of course, he was. Sempre Fidelus.

Thanks, Jack, for speaking for all of us who care about the Peace Corps and hope to join again in a newly energized and expanded Peace Corps, certainly one of the best ways to fight terrorism.
Peru 64-65 Nancy Meister