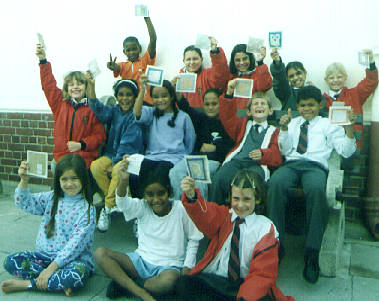 Read and comment on this story from the Queens Chronicle on Ghana RPCV Rudy Sovinee who created the One World, Our World program to teach tolerance, peaceful conflict resolution, peer mediation and peace building. Rudy served in Peace Corps Ghana from '70 - '73, where he taught chemistry and math before writing a Twi Dictionary of Chemistry and Physics. He has been active with the San Diego Peace Corps Association since 1988, Read the story at:

A Parents Guide To Helping Children Put An End To Bullying*


A Parents Guide To Helping Children Put An End To Bullying

In the wake of the rising tide of school violence, concern about bullying has reached an all-time high.

Much of the school violence that has made headlines in recent times has been traced back to bullying, according to experts.

Bullying takes many forms says Rudy Sovinee, creator of the One World, Our World program, which is designed to end bullying by teaching tolerance, peaceful conflict resolution, peer mediation and peace building.

Sovinee, a former Peace Corps volunteer and high school teacher, has been invited to teach the One World, Our World program across the nation and around the world. Through his experience in conducting peace-building workshops around the globe, Sovinee has become convinced that students really understand the importance of putting an end to bullying.

"They just need the right tools," he said.

Bullying can be a series of repeated, intentionally cruel incidents or comments or a single interaction that makes the victim feel uncomfortable, according to Sovinee.

He was a member of the team of experts who went to Santee High School to facilitate the healing process after the shooting incident at the San Diego County school.

Like Margaret Sagarese, author of "Cliques: 8 Steps to Help Your Child Survive the Social Jungle," Sovinee is concerned that we have become an "unkind culture." He sees that bullying is a social phenomenon that’s passed on from one generation to the next, much like domestic violence, and that today’s schoolyard bully may well grow up to be a spousal abuser, the highway bully who causes accidents or the boss who intimidates others in the workplace.

"Bullying has to be stopped," Sovinee said. The first step is to know what bullying is.

"We think of a bully as a person," Sagarese said. "It is a group behavior. It is a group of girls shunning one girl. It can be a look, a word, a tone of voice. Girls use friendship as the currency of bullying... With boys, it’s rumors that you’re gay, always something on the manliness rating."

There are physical bullies who hit or kick a victim or damage the victim’s property. There are verbal bullies who use words to hurt or humiliate another person through name-calling, racist comments, teasing or insults.

Relational bullies try to convince their peers to exclude or reject a certain person from their social connections. Reactive bullies, like the shooters in recent incidents of school violence, are often the most difficult to identify because they have been victims of bullying and claim self-defense when they fight back.

"Whether it’s a look, a comment, exclusion or a physical action, if it makes another person feel uncomfortable, it’s bullying," Sovinee said.

He points out that bullying rarely, if ever, happens in isolation.

"There are always witnesses to bullying, so one of the keys to stopping it is to teach students when it’s not OK to keep a secret and that it is OK to report it if they see bullying going on," he said.

The principles taught in One World, Our World and other programs designed to help students deal with bullying issues include learning that people are alike in many ways, even though they may seem different.

"It’s important for kids to get a global perspective and see our similarities rather than our differences and important for them to know that they can make a difference in the world," he said.

Seeing our similarities rather than our differences leads to resolving conflicts peacefully and helps students have more time for learning, according to Sovinee.

"Even good people can disagree, but we can work out conflicts by using six steps to building peace," Sovinee said.

His six steps to building peace and ending conflicts between bullies and victims are taking time out to calm down, sending "I" messages, active listening, brainstorming possibilities, taking responsibility and agreeing to live by results of conflict resolution sessions.

Although it may seem incomprehensible that the parents of the boys who engineered the Columbine High School shooting were unaware of what the teen-agers were up to, Sagarese says parents are often unaware of bullying behavior in their own children.

"We all say ‘not my child.’ I hear it when I do the bully talk with parents. And then I tell them that when my daughter was in fifth grade, she was participating in bullying, not even understanding what she was doing," Sagarese said.

Despite being an expert on the subject of bullying, she says that when she became aware of it, she knew she hadn’t had enough discussions with her child. When she sat down and talked with her daughter, she learned that her child had been involved in bullying behavior on all levels—as the bully, the victim and the bystander. As a result, she urges parents to talk with their children about bullying.

"I tell parents our story because all of our children have a stake in this behavior. We have to arm them and teach them how to get rid of this (bullying) and there’s no such thing as an innocent bystander," she said, adding that no one is immune from bullying and the tragic results that come come from it.

She suggests that parents watch their children’s behavior with peers and siblings, be careful about comments you make about other people and even how you drive on the freeway and not to laugh at put-downs you hear in television sitcoms.

To put an end to bullying, Sagarese says "we have to build a climate that is kinder" and that begins in the home and in the schools.

Rudy Sovinee served in Peace Corps Ghana from '70 - '73, where he taught chemistry and math before writing a Twi Dictionary of Chemistry and Physics. He has been active with the San Diego Peace Corps Association since 1988, but is best known nationally as the founder and presenter of the One World, Our World School Program... details are at One World, Our World School

This story has been posted in the following forums: : Headlines; Service; Special Interest - Education; COS - Ghana

How can i help children in ghana from starvation or any other problems including education i may only be 13 but i could get my school to raise some money , what contact would i need to make to help these children?