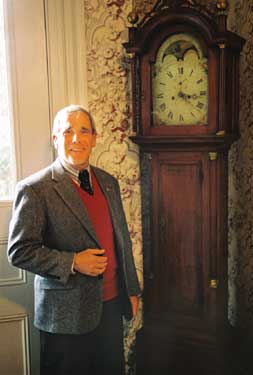 Read and comment on this story from Seacoast Online on Nigeria RPCV Tom Dunnington is active in Dover.

“We were the first rural development group of Peace Corps volunteers to go overseas. Up to that point they had hall been teachers, but we worked out in the bush.” Dunnington helped build roads, bridges, schools and many other things.

We just do things that need to be done*


We just do things that need to be done

A lot of people in Dover may be familiar with the name Tom Dunnington. Dunnington is a very active member of the community of Dover. He is a lawyer, a husband and parent, a City Councilman, an active person in seacoast theatre and in the Boys Scouts. His multiple interests are present even in his office, where one is greeted by a plethora of nostalgia. Maps of Africa, law books and Shakespeare, miscellaneous hiking sticks and antiques; Tom Dunnington is a man with a very unique story to tell.

Dunnington was born in New York in 1942, but his family, native to Dover, moved back when he was four. His father owned CB Hardware, and Dunnington grew up doing the normal things that kids did — selling newspapers and working on local farms. He attended Dover Schools until the early 1960’s, when he went away to a private school. From there he went to UNH and graduated with a degree in political science and history. It was while attending UNH that Dunnington began to be very active in theater and music.

After graduating in 1964, he joined the Peace Corps and went to Nigeria in West Africa.

“We were the first rural development group of Peace Corps volunteers to go overseas. Up to that point they had hall been teachers, but we worked out in the bush.” Dunnington helped build roads, bridges, schools and many other things. “It was a wonderful experience,” says Dunnington, “and I extended my stay in the Peace Corps for an additional year.”

While in the Peace Corps, Dunnington met his future wife, Barbara. Barbara was there as a volunteer of a Canadian Peace Corps and taught at a Catholic mission school. The Peace Corps got caught up in the Biafran Civil War, and Barbara caught one of the last planes out of Biafra before the borders were closed. Dunnington and his group had to cross the border where the war was going on.

“We came out by dug-out canoe in the Niger River, which was a very frightening experience because people were getting killed all around us,” he recalled. The Biafran government wanted Dunnington to work with its Army Corps’ engineers, but Dunnington declined as he thought it did not pertain to the “Peace Corps spirit.” Because of this they took away everything he had.

“They took my passport, they took my clothes, I had collected artwork for three years and lost all of that, they took everything,” he said. But Dunnington did manage to take home a chess set that one of the local carvers made for him. The group got out of Biafra successfully.

After that ordeal, Dunnington came home and worked for a few years in Washington D.C. for the Department of Commerce. Dissatisfied with the job, Dunnington made the decision to go to law school.

“By then I was married, and my daughter was on her way and I made this brilliant career decision,” Dunnington said with a laugh, “when my wife was seven months pregnant, to quit my job and moved to Boston to go to law school.” After three years he obtained his degree and moved back to Dover.

His mother was planning on selling the house and moving to Virginia, but Dunnington convinced her to give him house and moved in. He set up a law practice with a well-known lawyer in Dover, but the man died after three years and Dunnington took over the practice. For a year he teamed up with Bill Shaheen, but Shaheen was running Jimmy Carter’s presidential campaign and when Carter got elected, Shaheen was appointed U.S. Attorney. The next two years Dunnington worked with Danny Capiello, but that broke up and Dunnington has had his own practice ever since. Ten years ago Dunnington moved the practice into his house so he could be with his youngest son, then in junior high.

Dunnington is very passionate about theater. He has been involved with the Garrison Players since 1972, appearing in productions and also helping backstage and with sets. He is also one of the founders of the Seacoast Ballet Company and has performed with them for the past 17 years.

“I love theater,” Dunnington said, ”If I could have made a living at it I probably would have.”

Back in the 1950’s Dunnington was a member of Dover’s Boy Scout Troop 173. He had almost attained the rank of Eagle and absolutely loved Scouts. But when he got to eighth grade, Dunnington’s parents sent him to a private school and he had to drop out of the troop.

“Leaving home was not what upset me; leaving the troop really upset me,” Dunnington recalled. All of his friends were in the troop, and they got together often to go camping, biking and hiking. “That experience changed my life in terms of my view of the outdoors.” Even though he left Scouting, he still had an interest in it, and when his oldest boy joined the troop he became active once again.

“But when Michael got out of the troop, I sort of stayed with it because I love Scouting and I think I have as much fun as the boys today do, maybe more.” Dunnington is still active in the troop today.

Dunnington has three children. His daughter, the oldest, is a film music editor. Dunnington believes that “her interest in movies and that line of work developed out of us dragging her to rehearsals with the Garrison Players over the years.” His oldest son is a marine biologist who studied in New Zealand, and his youngest son is a graphic designer who graduated from Keene State last year.

Many people know Dunnington as a member of the City Council. For years Dunnington had been asked to run for office in the City Council and he declined because of his children. Dunnington was no stranger to politics, his father having been on the school board and a state senator.

“I’ve met my share of national politicians that came through; I’ve met Richard Nixon and many others,” noted Dunnington. After his youngest son left for college, Dunnington was approached again to run for city council.

“At that time Will Boc was the mayor, and the way council was being run in those days, it was a pleasure to watch it because people were treated professionally and it was just a good process back then,” commented Dunnington.

Dunnington ran for Ward 6, was elected, and ran for a second term unopposed. Dunnington is still on the city council, but may retire from it in the future.

“I like to be part of it,” he said, “but I will move on from this. I’ll be 61 this month and, quite frankly, I’m tired. I want to enjoy life while I still have my good health; I want to go fly-fishing more often.”

Dunnington’s fatigue is more than justifiable. It is easy to see how much he does for the community. But why is he so active? He goes on to quote his father.

“I can remember my father telling me that this community has been very good to our family for many years,” he explained, “and we have a responsibility to give back to the community. That’s why we do things that need to be done without fanfare; we just do it.”

This story has been posted in the following forums: : Headlines; What RPCVs are doing today; COS - Nigeria

I am glad to hear or learn about you. I am a member of the Nigerian Peace Corps in nigeria, and after reading your article,i realised that we need to work hand in hand, why not communicate with the office of the nigerian peace corps and see how you can work together, the, the address si nigerianpeacecorps@ yahoo.com, thank you

Good day sir/ma,
I want to join your society but unfortunately for me when i got the Local Governmnet at Akure where i suppose to obtain the form, i was told that the forms are not available again.
PLease can you kindly help me so that i can be one of your members because when i heared of your society from one of my cousin i was imppressed and i love it.
Please how can you help me to obtain the form at Akure .
I will be very grateful if my request can be granted.
Thanks very much
Akinyemi Sunkanmi from (NIGERIA.)