Diplomat Larry Foley murdered in Jordan was a Returned Volunteer 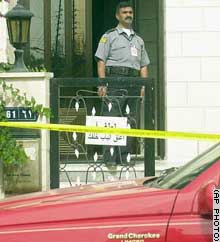 Read and comment on this story from CNN that Larry Foley, an employee of the US Agency For International Development mission in Jordan was shot and killed outside his home this morning in Amman.

Mr. Foley was a RPCV who served in India from 1965 - 68 and was an Associate Peace Corps Director (APCD) in the Philippines in the early 1980's. The Returned Volunteer community grieves for Larry Foley and sends our sympathy to his family and friends. Read the story at:

AMMAN, Jordan (CNN) -- A U.S. diplomat was shot dead Monday by an unknown assailant near his home in Amman, Jordan's information minister said.

The Information Ministry said the masked gunman opened fire as Laurence Foley, an official with the U.S. Agency for International Development, was leaving for the U.S. Embassy, striking him with six bullets as he was getting into his car.

Later, police officials said that seven or eight bullets had been fired from a single weapon. The slaying occurred about 7:20 a.m. (12:20 a.m. EST).

There was no immediate claim of responsibility, and U.S. officials said they did not know whether terrorism was involved.

"I believe the wife of the diplomat informed the authorities," Information Minister Mohammed al-Adwan said. "Unfortunately, she is under shock right now. Authorities have not been able to talk to her in detail about this."

In addition to his wife, Foley, who was said to be in his 50s, is survived by three children and a number of grandchildren, according to the USAID office in Amman.

State Department officials said security would be beefed up around the U.S. Embassy in Amman, the residences of U.S. diplomats and schools attended by American children.

The U.S. Embassy in Jordan said it was working closely with Jordanian officials to investigate the shooting.

"All of us in the American community convey our condolences to the Foley family on the death of such a warm and loving man," a statement from the U.S. Embassy in Amman said. "We are outraged by this incomprehensible act."

The embassy statement called on Americans in Jordan to remain vigilant in light of the attack.

The U.S. Agency for International Development is an independent agency that provides economic, development and humanitarian assistance around the world in support of the foreign policy goals of the United States, according to its Web site.

"Amman is usually a very secure city," al-Adwan said. "We give priority to all diplomatic missions, especially the United States mission in Jordan.

"We are fairly certain that we will catch the perpetrators and will [bring] them to justice."

Jordan is a major Middle Eastern ally of the United States.

This story has been posted in the following forums: : Headlines; Obituaries; COS - India; COS - Philippines

Larry Foley should be commended for his service to Peace Corps while he was a volunteer and as a Peace Corps staff person. His passing is tragic. He was committed to Peace and security throughout his career. He will be missed.

I am Cora Q. Centeno, from the Philippines. I hope you still remember me. To refresh your memory, we met in the northern part of the Phils., Vigan, Ilocos Sur in 1975. We dated sometime here in Manila before you left for a new mission in Katmandu, Nepal.I'm still single, never married I just retired from the National Power Corp. last Feb. and I am now a lady of leisure. If you are interested to get in touch with me, my email address: cqcenten@info.com.ph.