Read and comment on this excerpt from a story from the LA Times on Roger Stanton, Chairman of the Orange County Board of Supervisors in 1994, who resigned when Orange County plunged into bankruptcy when the county lost $1.7 billion through bad investments and who is now campaigning for election to Fountain Valley City Council on a platform of fiscal accountability.

The story says that Stanton has the endorsement of Peace Corps Director Gaddi Vasquez who was also a member of the Board of Supervisors during the bankruptcy and who also resigned before completing his term.

A few days ago, the NPCA published an interview with Mr. Vasquez in its alumni newsletter and asked the Director how he would answer people who asked him about his role in the Orange County bankruptcy. He replied that they should judge him on what he's done since he arrived at the Peace Corps and went on to talk about his accomplishments since becoming Director.

While we acknowledge Mr. Vasquez's accomplishments as Director, we also take him at his word and ask why he continues to align himself with his political cronies since he's arrived at the Peace Corps by getting involved in a local Orange County political race and endorsing a man who faced civil misconduct charges for failing to prevent Orange County's bankruptcy?

While there is no law against the Peace Corps Director getting involved in politics, we have to ask if this is the way the Director hopes to dispel the impression that he is using the Peace Corps as a political platform to help his friends and rehabilitate his past? Read the story and make up your own mind at:

"Hi, Mary, I'm Roger Stanton. I don't know if you remember me," he says with a smile.

"I sure do; you bet," responds Mary Talbot, a senior citizen who has lived on a quiet Fountain Valley cul-de-sac for years.

Stanton, 65, is campaigning with a vengeance for a seat on the Fountain Valley City Council -- and political redemption. 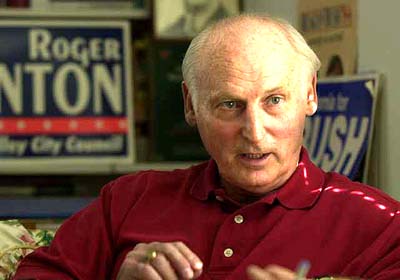 Roger Stanton (above) is gathering endorsements that include Gaddi Vasquez, Peace Corps Director.

A decade ago, Stanton was one of Orange County's rising political stars, a dominant figure on the Board of Supervisors often talked about as a candidate for Congress or statewide office.

But that was before 1994, when Orange County plunged into bankruptcy. Stanton, chairman of the board at the time, was harshly criticized for letting the financial crisis happen on his watch.

Veteran political observers, longtime foes and even old friends said they are stunned by his run, especially because he says he wants to restore fiscal accountability to the city.

"I just almost fell off my chair," said Mark Petracca, a UC Irvine political science professor. "I guess in Fountain Valley it is possible to run away from your past."

Stanton seems to be banking on the fact that many voters don't remember or care about the county bankruptcy, and his strategy could prove to be a winning one.

Many voters either don't remember Stanton, and are glad to see a candidate at their front door, or seem to be willing to let bygones be bygones.

Ghosts of the past do pop up.

"No, I won't vote for him," said Jack DeFratus, a Fountain Valley resident since 1966. The bankruptcy "was pretty stupid. All these politicians, they think you forget it, what they did in the past. Well, we remember. I'd vote to keep him out."

Stanton responded that everyone is entitled to an opinion and that he will be grateful for every vote. He said he decided to run again while having coffee this summer with other former city politicians who thought it was time for a change. The day before the deadline, he went to City Hall and filed. For a council race, he is conducting an aggressive campaign, gathering endorsements that include Sheriff Michael S. Carona; Gaddi Vasquez, Peace Corps director and also a former supervisor; other former and current supervisors; and school board trustees.

Nearly all of his reported contributors so far are from outside the city, including longtime county lobbyist Frank Michelena, former Irvine Co. executive Gary Hunt and other developers. Stanton is not using the $120,000 he still has in the bank from county races. He would not rule out using those funds for possible future, higher office -- perhaps a run for Assemblyman Ken Maddox's seat in 2004.

"Never say never," he said with a smile.

"Fiscal accountability? That is the most hysterical thing I have ever heard, for a guy who was in charge of the board at a time when the county went bankrupt," said former county administrative officer Ernie Schneider.

He and others note that Stanton voted to approve $600 million in speculative investments that eventually led to the bankruptcy.

Stanton said comparing county investments and city expenditures is like comparing apples and oranges. He usually avoids mention of his tenure as board chairman during the bankruptcy, saying, "It's history that's been told a thousand times." He refers to himself in campaign literature as "the city's representative on the board of supervisors."

But when pressed, he defends his work then, as do many supporters.

"I stayed. I did my job," he said. "I helped get the county out of it, as well as providing 14 other years of service."

Former Fountain Valley Mayor Ben Nielsen, who is backing him, said that Stanton did nothing wrong before the bankruptcy by listening to financial advisors and county staff and acting on their advice on investments.

After the collapse, he said, "Roger was a stabilizing force on that board; he was one of the guys who got us through it. There were other supervisors who quit.

This story has been posted in the following forums: : Headlines; Peace Corps Directors

This endorsement of another former member of the failed Orange County Board of Supervisors by Director Vasquez validates my opposition to him during his confirmation hearings.

I have no idea what Director Vasquez might have been thinking in making this endorsement, but it tells me that he has learned nothing from the Orange County debacle.

The budget and finance arm of the Peace Corps staff should be very alert to, and wary of, misfeasance and even malfeasance on the part of this fledgling Director and his appointees.

I know you are going to say that heads of Agency's do this endorsing all the time. However, some don't once they are in office. Swearing in before the American people, means all the people. When you endorse candidates, you alienate other populations, I guess that is politics. Though Mark Gearan and Carol Bellamy aren't friends of mine. I did not see Mark running home to endorse candidates here in Massachusetts. Or Carol running home to endorse New York City Council candidates. Both of these Democrats were active in politics. Vasquez is still in campaign mode.

He should keep his "nose to the grind-stone" and get back to work for all Peace Corps volunteers and former Peace Corps Volunteers. Focus.