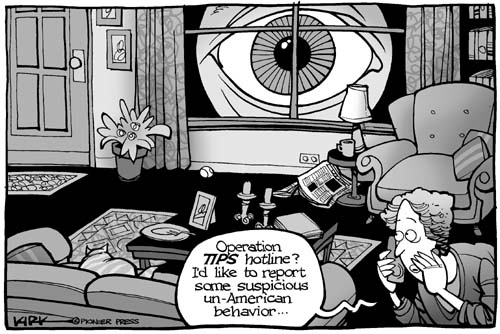 Read and comment on this Press Release from the ACLU on the Homeland Security Bill that Congress seems likely to adopt. The new bill (HR 5005) will create a homeland security department with final House action expected later today and a Senate vote in the next few days.

The bill would prohibit the implementation of the controversial Operation TIPS program and reject a national ID card. PCOL has previously highlighted the fact that not only would the proposed TIPS program turn neighbors into government spies but that the TIPS program was slated to be under the USA Freedom Corps, the umbrella agency that includes the Peace Corps and thus create a connection between the Peace Corps and intelligence gathering activities.

Opposition to TIPS came from both the left and right of the political spectrum and was championed by both strict constitutionalists like outgoing House Majority Leader Dick Armey and by the citizens concerned about attacks on American's civil liberties like the ACLU.

WASHINGTON – The American Civil Liberties Union today applauded several provisions in the latest homeland security bill -- including those that would prohibit the implementation of the controversial Operation TIPS program and reject a national ID card -- as victories for civil liberties.

“From a civil liberties standpoint, the homeland security bill is still far from perfect,” said Laura W. Murphy, Director of the ACLU’s Washington Legislative Office. “But we should make no mistake: in rejecting a national ID card and the Administration’s own plans to turn neighbors into government spies through Operation TIPS, Congress has taken two important steps to protect civil liberties.”

Congress seems likely to quickly adopt the new bill (HR 5005) to create a homeland security department with final House action expected later today and a Senate vote in the next few days. While the measure contains important civil liberties protections, the ACLU said it also has serious drawbacks, including:

* Shielding information from public scrutiny. The bill exempts information about so-called “critical infrastructure” from the Freedom of Information Act. It even goes so far as to impose criminal penalties for government officials who disclose this information. As a result, officials who blow the whistle on threats to public health (uranium stockpiling or tainted blood) or private sector incompetence (poor maintenance of railroad tracks or computer networks) could become criminals. The legislation imposes these FOIA exemptions not just on the federal government, but also on states and municipalities by trumping all state and local open government laws.

* Overly broad intelligence information sharing provisions between the Homeland Security department and other agencies, such as the FBI or the CIA and even with foreign law enforcement agencies. Some versions of the homeland security department bill included a much narrower provision that required a connection to a terrorism investigation before such sensitive information could be shared. The current version, the ACLU said, is broad enough to sweep in minor criminal matters.

In addition, the bill includes an entirely new provision – not included in any previous version of the legislation – that opens the door to a federal policy on forced vaccinations. Such a policy would not be effective as a public health measure nor would it respect individual liberty and at a minimum, the ACLU said, deserves serious public debate.

The ACLU said that those significant flaws are, however, matched by surprising victories for civil liberties in the new bill, which was the result of close negotiations between the White House and Congressional leaders.

“The President’s own plans for Operation TIPS and a national ID were eliminated in a bill that carries the White House seal of approval,” Murphy said. “These are tremendous victories for privacy.”

Operation TIPS, as proposed by the Department of Justice, sought to actively recruit a network of government informants among utility workers, cable technicians or anyone else whose jobs grant them easy access to private homes.

The ACLU was the first organization to question the plan, calling it a network of “government-sanctioned peeping Toms.” The media and the general public followed suit. The Washington Post said that the President and Attorney General “should not be using utility workers to conduct surveillance they could not lawfully conduct themselves.”

The national ID proposal was also proposed by the Bush Administration and included in the White House’s official national security plan, which provided the basis for the bill. The plan, released earlier this year, called for the national standardization of state driver’s licenses, a de facto national ID.

In its compromise form, the homeland security bill also mandates both a civil rights watchdog for the whole agency and a privacy officer for the department’s Office of Information Analysis. While the ACLU would have preferred these positions to have more authority, their inclusion marks a positive step.

On immigration, the ACLU said the legislation was a mixed bag. The bill improves on the President’s original plan by leaving the Executive Office for Immigration Review, the agency that conducts deportation hearings, in the Department of Justice, but the ACLU said Congress missed an important opportunity to provide the agency with greater stature and independence.

Likewise, the bill transfers the care and custody of unaccompanied immigrant children from the INS to the Department of Health and Human Services, which is an improvement, but fails to ensure an enforceable right for such children to have guardians and legal counsel.

“The Homeland Security Department will become a fixture of both official Washington and every American’s daily life,” Murphy said. “While we celebrate these important victories in killing TIPS and a national ID card, Congress and the public will have to scrupulously monitor this new agency to safeguard privacy, avoid undue secrecy and protect due process rights in America.”

warrant officer:
an officer having authoritty by virtue of warrant
.in the us army such officers are intermediatte in rank between an inlisted and commissioned officer..in the navy such warrant officers are appointed by the president..

warrant:
a certification of appointment of warrant officers..
a judicial writ authorizing an officer to make a search,seizure or arrest,or to do other acts of administration of justice..

march 10th
alberto gonzolas go,s to attorney john david ashcrofts hospital room to get a surveilance program reuthorized sent there by the president..
the central intelligence agency has had an inspector general since 1952..i.g,s were appointed by the director of c.i.a. prior to 1978 and coincidentally about the same time george herbert walker bush went from c.i.a. director to president..

march 10th john david ashcroft said he was unable to talk to the person he needed to because of the compartmental rules of the white housre,,""'us law regarding exposure of covert government agents""""
it needs to be understood that the secret service is also a "secret"agency service and exposure of a secret service agent would be under these guidelines as well..

secret service::
a government detective bureau..
a system of espionage and infrastructure durring a time of war....

they have said all it takes to asassinate the president is to be willing to trade youre life for his...

it has also been said all it takes to be a secret service agent is to be willing to throw youreself in front of the president..


all it takes to be a executive branch
secret service agent is ...

the secret service gathers ,collects and disseminates intelligence differently then any othjer agency...
the secret services top agents are trained in
if you assaulted this agent or shot him with a tazer etc triing to get access to the president you are a trader and have no pertections of law in the united states..
this also means you can be taken to guantanamo bay and have youre head cut off for spitting on
a navy warrant officer...
this message from "marshal""