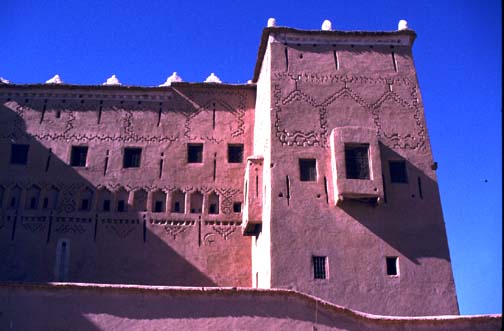 Read and comment on this story from the Washington Times on the "Friends of Morocco" RPCV Group and how a group of them traveled to Morocco last month to visit development projects, old haunts and long-lost friends and to revive ties to a land they can never forget at:

CASABLANCA, Morocco -- Said Bouayed stands on the Casablanca street as his former English teacher, Polly Scoville, arrives. He walks toward her with a bright smile, to this most beloved of teachers.

They embrace hard. And do so again.

Because it has been almost four decades with no words between them. And because sometimes, even that much time does not sever memories or bonds.

"These kind of reconnections between the students and I, between Americans and Moroccans, make it possible for the world to survive," says Mrs. Scoville, of Flint Hill, Va., a former Peace Corps volunteer who taught English in Fez from 1963 to 1965. "I am so spoiled and excited and humbled."

So it went for a small group of Americans, former Peace Corps volunteers and others with ties to the small North African nation. They had traveled to Morocco last month to visit development projects, old haunts and long-lost friends and to revive ties to a land they can never forget.

They are "Friends of Morocco."

Started as a D.C.-based Peace Corps alumni group, it is now a nationwide advocacy organization of 400 members.

At home, the group produces a newsletter and a Web site with weekly Moroccan news updates that has become a clearing- house of information on the country. The members raise funds for pediatric cancer hospitals and other projects in Morocco. They organize trips to a country that so long ago became a second home.

"It is my hobby," half-jokingly says Tim Resch, 54, of Alexandria, a former Peace Corps volunteer in Morocco in the early 1970s. "Seriously, there are those of us who are trying to connect to Morocco and do something because we haven't forgotten."

"It evolved from a social club into something much more," he says. "We finally realized that what we had was a force to educate. And we realized that working with Moroccans, we could be [more] stronger together than apart."

"September 11 gave us new purpose and meaning," Mr. Resch says. "It became a personal mission for us to resuscitate tourism, to clear the country's name from terrorism. We needed to go - as a protest - to show that we stood with Morocco, and to remind people of the long term friendship between the two countries".

On the one-year anniversary of September 11, Mr. Samrhouni's group showed its solidarity with America by holding a memorial dinner attended by many "Friends of Morocco."

"There is no one here advocating for us or Moroccan-American relations," says Mr. Samrhouni, who grew up in Morocco. "That is why this group is so important."

Mohamed Ali Ghannam, governor of Souss-Massa-Draa, a province in southern Morocco, said that after September 11 there was a greater need to reinforce the relationship between Morocco and the United States. "These Americans that have lived here and understand Morocco very well are critical to this mission." 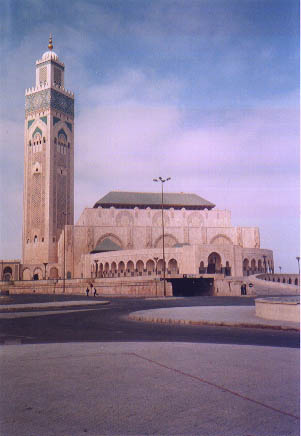 Former Peace Corps volunteer Mike Smith, 62, of the District, points to a large marbled area in front of the Hassan II Mosque in Casablanca, the first stop on the group's visit.

Decades ago, it was the largest salt water pool in Africa, he says. It also was his "office" almost 40 years ago when he was the national swimming coach for Morocco.

"Yeah, it's weird," the retired IBM marketing executive says. "This place had significant meaning to me. It's like coming home after you've been gone for 35 years. I saw changes and couldn't believe it. Still, it feels good to be back."

The 15-member group toured on this trip beach resorts, palaces and markets in royal cities, walled old-towns and mountain villages.

The former volunteers brought money and toys donated by schoolchildren in St. Paul, Minn., to Service d'Hemato-Oncologie Pediatrique de Hospital 20 Aout 1953 in Casablanca, the only hospital in Morocco for children with leukemia. There the group learned of the difficulties doctors face treating the thousands of new cases annually in a nation in which the average income is $1,250 a year.

"In a country where we still have tuberculosis and malaria, it is almost crazy to be talking about leukemia, lymphoma and hemophilia," says Dr. M'hamed Harif, tears in his eyes. "The treatment is expensive and most people are poor, with no insurance. But we must try even if that means making difficult choices: Give to one, another goes without.

"Sometimes I am not very proud of being a doctor because of my inability to do more," he says.

He adds, however, that this group's interest and contribution send a message of friendship from the United States that is more meaningful than words from politicians.

"The gesture gives me hope that with your help we can achieve a lot and help patients suffer less," he tells the group during their visit. "We have been blessed by people thinking of us, giving to us, being so devoted to us. They are doing what our own people aren't doing."

Afterward, the visitors reach for their wallets - the $350 donation doubles in minutes.

Some of the volunteers connect in more personal ways.

Robert Zambrano, a professor of English at Gallaudet University, visited two schools in Agadir and Tetouan that teach deaf children. In a country with up to 70 percent illiteracy rates, the schools are funded privately by parents and the deaf community.

The administrators begged for help.

"All they wanted were books showing American deaf kids working with sign language, books showing success stories of deaf people," says Mr. Zambrano, 61, of Arlington, who taught English in Tetouan from 1963 to 1965. They want such books "because these deaf children don't believe they can be successful."

"I particularly wanted to make a connection with the deaf in Morocco because it has been my life's work," he adds.

Mr. Zambrano says he will try to get pen pals and materials for the schools so the children can see firsthand what the deaf can do. (Yesterday, Mr. Resch, Mr. Samrhouni and Mr. Zambrano met with Gallaudet President I. King Jordan to discuss how the university could help the Moroccan schools.)

Many former volunteers say they are motivated to give back to their former host country because of the impact the Peace Corps experience had on their lives.

"It was a life-changing experience," Mr. Zambrano says. "I grew up here and it changed the direction of my life. The experience becomes a part of you."

All the volunteers say they were glad they made the effort to return to Morocco.

Mr. Smith says jokingly that his trip was motivated by "a belly dancer I have been thinking about for almost 40 years. Seriously, when I left, I realized I had learned and received more than I gave."

Asked why it was so important for him to find his teacher after 38 years, he whispers, "it was something big for me."

Then he turns away, takes off his glasses and cries.

Nearby, his teacher does the same.

Visit the Friends of Morcco Web Site at: 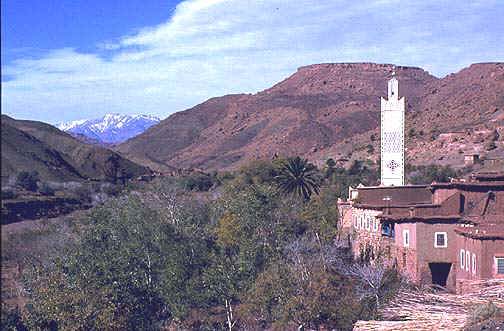 This story has been posted in the following forums: : Headlines; What RPCVs are doing; COS - Morocco

I am a Moroccan Professor at The University of Casablanca. I would like to reconnect with my first teacher of English, Tom Smith, who taught me English in the little village of Sidi Bennour, Morocco, back in 1976-77-78. I remember he was from the NY city area.
My name is: Abdelhak Elghandor.
Email: aelghandor44@yahoo.com
Phone# in Morocco: 011(212)661.42.82.74