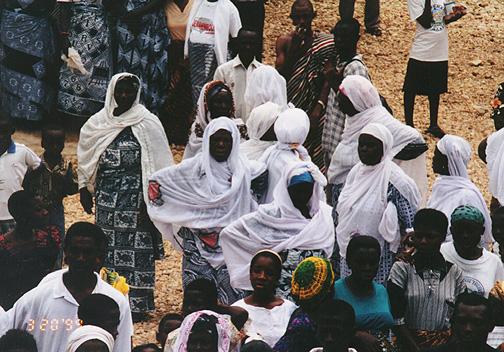 Read and comment on this story from the Accra Mail on Ghana PCV Brian Wellner who participates in Bicycle Ride Across Ghana to Commemorate World Aids Day. The Ghana AIDS Commission and Peace Corps Ghana have agreed to sponsor the planned two-week journey, which will take them through the Upper West, Northern, Brong-Ahafo, Ashanti, Eastern and Greater Accra regions. As with the previous three rides, Katouri and Wellner will seek further assistance from the Ghana Education Service, District Assemblies and Regional Coordinating Councils to organise speaking venues throughout the ride. As the route will take the three riders through several urban areas, Katouri, Wellner and Razak will focus on educating groups in lorry parks and market places about the HIV/AIDS menace. Read the story at:

As part of activities to mark World Aids Day on December 1st 2002, a Wa-based NGO supported by the Ghana Aids Commission, has planned to Ride Away AIDS. This exercise began last year with the purpose of delivering information on HIV/AIDS to secondary school students and remote communities via bicycle.

Ride Away AIDS now plans to trek the 721 kilometres from Wa in the Upper West Region to Accra with the hope of meeting with the Minister of Basic Secondary and Girl-Child Education to address the growing pandemic on the people of Ghana. The ride is taking place the first three weeks of this month.

Upon completion of the ride, the team will then journey to Obuasi for the World AIDS Day event on December 1, 2002.

Katouri and Wellner founded Ride Away AIDS, a non-profit making, Wa-based organization, in September 2001, and with Razak and other members, have since completed three successful HIV/AIDS bicycle rides, including a 14-day, 600km campaign around the three northern regions of Ghana last October. During that ride, nearly 10,000 students in 13 secondary schools and two training colleges were spoken to, as well as community leaders and radio stations in Wa, Tamale and Bolgatanga.

Ride Away AIDS immediately followed up that ride with a trek to the annual Kakube Festival last November in Nandom, UWR, where members addressed a council of chiefs, including the President of the National House of Chiefs, and Regional Heads on the topic of HIV/AIDS.

The Upper West Regional Minister, Mr. Sahanun Mogtari, awarded each member with a Certificate of Honour during the 45th Anniversary of Ghana's independence on March 6, 2002 in Wa.

Katouri and Wellner assembled a team of eight riders and set out for their third ride in June 2002 to the communities of Kaleo, Nadowli, Jirapa and Daffiama, where they spoke to schools, church congregations and youth groups.

The Ghana AIDS Commission and Peace Corps Ghana have agreed to sponsor the planned two-week journey, which will take them through the Upper West, Northern, Brong-Ahafo, Ashanti, Eastern and Greater Accra regions. As with the previous three rides, Katouri and Wellner will seek further assistance from the Ghana Education Service, District Assemblies and Regional Coordinating Councils to organise speaking venues throughout the ride. As the route will take the three riders through several urban areas, Katouri, Wellner and Razak will focus on educating groups in lorry parks and market places about the HIV/AIDS menace. They will also speak to students from junior secondary school to training college level and will organise interviews on radio and any other media outlets.

A particular unique feature to this ride is a collection of HIV/AIDS-related poems written by residents of the Upper West Region that Katouri and Wellner are currently in the process of compiling. This book of poems will be presented at each speaking venue and finally be hand-delivered to the Ministers upon completion of the ride in Accra. Ride Away AIDS sees the book of poems as a creative way for people in the Upper West Region to express their concerns about the growing threat of HIV/AIDS in their area and in the world.

The Upper West Region, the youngest in Ghana, has for long been without adequate resources for the education, prevention and screening of HIV/AIDS. According to Ministry of Health officials, it is also a region that recently ranked second highest in Ghana for rate of HIV infection - at an estimated 6 percent of the adult population, behind only Koforidua in the Eastern Region. Officials add that there is not enough money, food or medicines to treat the many residents already diagnosed with full-blown AIDS in the region.

The Wa-Accra ride is the group's attempt to draw national attention to a plaguing epidemic that is infecting the lives of over 200 Ghanaians everyday.

Statistics are showing that the rate of HIV infection is not slowing down. The World Health Organization has estimated that if the disease is not checked, then by 2004 about 750,000 Ghanaians will be infected with HIV. As medicines to slow the progression of HIV into AIDS continue to be costly and unattainable, the rate of cumulative AIDS death is also on the rise: 300,000 deaths by 2004, 600,000 deaths by 2009, and 1.1 million deaths by 2014 (that is, since the first reported case in 1986).

Read the related story which we previously published on the Niger AIDS Education Bike Ride at:

This story has been posted in the following forums: : Headlines; COS - Ghana

KOLOG SOLOMON IS MY NAME AND AM PUTING UP AN ORANIZATION TO HELP FIGHT AGINST AIDS IN GHANA AND THE WORLD,HELPING THE YOUTH WHO ARE GOOD IN ACTING,DANCING,RAPPING AND HAVE ANY OTHER POTENTIALS
THE NAME OF THE ORGANIZATION IS THR KOLOG CHILD THEATER ORGANIZATION AND I WILL NEED HELP FROM YOU PEOPLE TO BRING OUT THIS DREAM I HAVE

BRIEFING
AidMe-Ghana is a non governmental, non political and a non profit making organization which seek to source funding (both human and material resources) from donors, friend and well wishes, home and abroad to support children in deprived rural communities in the Upper West Region in their education and health needs. Our target group includes all children under 15years living in deprived rural communities in the Region.

AidMe-gh is formed to complement and support the developmental process of rural children and deprived communities in the Upper West Region. We have recognized the role we can play by being a more proactive organization to undertake developmental projects mainly in education and also health, in deprived rural communities for the benefit of children.

OBJECTIVES
The main goal of AidMe-Ghana is to assist poor and rural children in deprived communities to better their lives in terms of education and health. Specified objectives include;

v To promote and uphold the keeping of children of school going age and more especially the girl child in school.

v To assist orphanages/Children Homes in the Region in terms of food, learning materials and volunteer service.

v To adopt and help furnish selected basic schools and children hospital wards in the Region with the needed tools for efficient output.

v To establish an educational endowment fund for brilliant but needy student in the Upper West Region.

v To always recruit volunteers, both local and international to support our developmental plan by coming to help with their human resource/services

HOW WE WORK
We source funding from donors, friends and well wishers, home and abroad to carry out projects in line with developing the rural child. We also liaise with other organizations to execute projects of common
We also recruits both local and international volunteers to come and support with their human resources in selected rural schools, hospitals and communities.

CONCLUTION
If you can support this worthy cause, do not hesitate to donate or offer your service. we hope with your cotribution we will be able to meet our mission "strives to build bridges between the deprived rural child and other children and to add meaning and value to their lives through assistance on the part of education and health. Also, to be proactive, effective and efficient in harnessing the developmental potentials of deprived youth for the development of the Region.