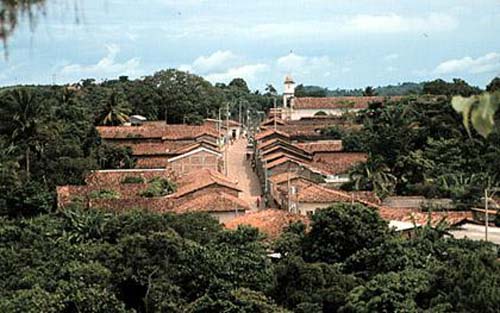 Read and comment on this excerpt from a story from the Tulsa World on a parent's visit to her Peace Corps daughter in El Salvador at:

El Salvador ; There's much to see, enjoy in country emerging from civil war *


El Salvador ; There's much to see, enjoy in country emerging from civil war

VALLE NUEVO, El Salvador -- Shortly before sitting down to eat in the flickering light of a few candles, I was startled by a huge, writhing centipede that crawled into view on the dinner table, waving scorpion-like pincers.

Lidia Guardado, a neighbor who had stopped by, swooped it up in a cloth and crushed it outside.

"You would rather be bitten by a scorpion than by one of those," she said as my daughter, Savannah, translated the Spanish. "Its bite will swell your arm up twice its normal size."

Bon appetit! Thus did a candlelight meal cooked on a camp stove begin at Savannah's Peace Corps site, a one-room house beside a rutted dirt road that curves past woods and fields a few miles from El Salvador's Pacific coast. No electricity. No drinking water from a tap. No plumbing. At least there was a bed with mosquito netting.

Still, the helpfulness of the neighbor on that evening was but one example of the kindness that my wife, Penny, and I received on a Thanksgiving-season visit to El Salvador, including two nights in the remote community of Valle Nuevo.

Our daughter had been working on U.S. Peace Corps projects in the area for nearly two years, and the trip became a memorable vacation to a country that is full of spectacular natural beauty but is not on many Americans' must-see lists.

There is much to see: Volcanoes such as Izalco, Cerro Verde and Santa Ana rise on the horizon, stark and majestic, almost everywhere you travel. Brilliant blue lakes, such as Lago de Coatapeque, lie beneath steep volcanic ridges. Monstrous Pacific waves crash into coastal cliffs near La Libertad or roll onto soft, dark sands. Colonial cities offer sightseers grand, historic structures, such as the cathedral and national theater off the square at Santa Ana, and quiet strolls over centuries-old stone streets with pastel-colored houses, such as those of the mountain town of Suchitoto.

We found the people, from El Salvador's farmlands to the bustling, often teeming streets of its bigger cities, genuinely friendly to us, timid visitors from Alabama that we were. This was partly because many Salvadorans have relatives in the United States, or dreams of going there themselves.

But before our daughter was given her Peace Corps assignment in El Salvador, our unsettling image of the country was of a Central American nation undone by civil war: The assassination of Archbishop Oscar Romero as he conducted Mass in 1980; the slaughter of peasants and church workers over the next decade, all reported in graphic news accounts.

The warring between El Salvador's political right and left formally ended with the peace accord of 1992, however, and travel guides now describe a country with typical problems for the region -- extreme poverty, crime, pollution, devastating earthquakes -- but much to recommend it. Particularly the friendliness of its people.

San Salvador, the capital and largest city, can serve as a home base for trips to the many scenic and historic sites, including somber landmarks from the civil war. In San Salvador, the University of Central America has maintained a kind of shrine to the six Jesuit priests, a housekeeper and her child, who were murdered on the campus in 1989.

El Salvador, with cheap food, rooms and buses, is a great country for budget travelers (if you are fit and someone in your group speaks the language), but there are also luxury accommodations and cosmopolitan cuisine.

The Princess Hotel, where we stayed part of the time, spreads out a sumptuous breakfast smorgasbord that includes fried plantains, richly smoked bacon and sausages, and dark, creamy frijoles as comforting as grits. One night in San Salvador, while crunching on Japanese tempura at the Kamakura restaurant, we laughed at the odd confluence of cultures when "Sweet Home, Alabama," wafted in as background music.

San Salvador's attractions include the artifacts in the newly enlarged national museum of archaeology (Museo Nacional de Antropologia David J Guzman), where a bilingual guide gave us a two- hour tour of the country's history and culture.

Work of the artist Fernando Llort, whose La Palma school of colorful native design is now an industry of its own, is on display at a San Salvador gallery and restaurant, El Arbol de Dios. His remarkable paintings and sculptures, some of them reminiscent of his Spanish forebear Picasso, are only steps away from tables where grilled and a bit greasy pupusas and other steaming hot tipico food can be had for only a few dollars.

Llort's signature palette of children's play-block colors is also on the magnificent facade of the Metropolitan Cathedral in the city center, a crowded, noisy sector of vendors and street life -- some compare its density to Calcutta's -- where we stopped briefly on a taxi drive elsewhere.

Riding the buses of El Salvador is, well, a trip. Many are old U.S. school buses, such as Blue Birds, that have been painted in bright carnival hues and exotic patterns. They're very cheap, but often jampacked, and figuring out the schedule can be tricky.

Another memorable moment: Turkey and dressing for Thanksgiving lunch with most of the more than 100 Peace Corps volunteers in El Salvador.

Valle Nuevo is not a tourist destination. From the canton of Metalio, it's about an hour's ride on a bus that churns gears as it crunches up the rocky road past El Mora, past adobe homes with dirt floors beneath tile or tin roofs.

At Savannah's house, with brick walls painted a bright green and a tile roof shading a concrete-floored verandah, washing is done outdoors from a pila, a large stone sink filled with the day's water. Dishes, clothes, bodies -- all get soaped and then cleaned with scoops of water from the pila.

Up the road a short walk past woods and meadows is what amounts to the center of Valle Nuevo, a hilltop with a thatch hut serving as a one-room school, a dark little store selling snacks and bottled sodas that are poured into plastic bags with a straw to drink, and a medical clinic that is basically a garage-size building with counters, charts and a dirt floor.

Ana Luz Arriola, the health promoter whom Savannah has worked with, runs the clinic and lives nearby in a family compound of adobe housing, with a lovely view of the Pacific in the distance. Welcoming us were at least 10 family members, elderly women, in-laws, children - - including her own year-old baby, Anita. Plastic chairs are pulled out for our comfort, and we settle into another world.

As we leave Valle Nuevo, two little neighbor girls with bright beaming eyes and endearing smiles put aside their shyness and approach us. One has a baby brother in her arms. The other is carrying a gift for Penny and me, a gift the size of a watermelon that is of real value to her family. It is a gift no one has given us before, a gift as unforgettable as our trip to El Salvador -- a big, shiny green papaya.

This story has been posted in the following forums: : Headlines; COS - El Salvador;

I'd like to say that I really enjoyed reading this article. I'm a grad student from El Salvador and I'm currently working on my Masters in Arkansas.

Whenever I have friends visiting my country, it is exactly what I just read what I would like for them to take from their visit.

I really really like the fact that you mentioned that we no longer are in war and that even though many travel magazines describe us in such a way, the country is certainly full of beauty that is only discovered once you are there.

Thanks so much for visiting my country and i'm glad you enjoyed it!!!