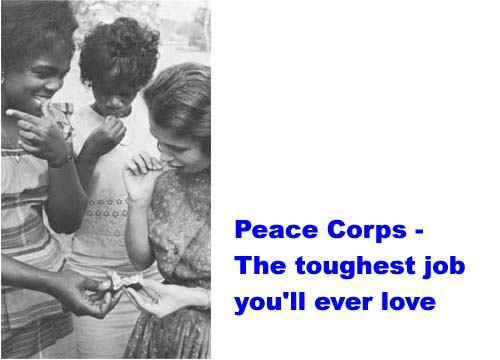 Read and comment on this story from the St. Petersburg Times on Documentary filmmaker Winnie Kelley, creator of the Peace Corps slogan: "The toughest job you'll ever love." Mrs. Kelley oversaw advertising for the Peace Corps during the 1970s when the volunteer organization began using the slogan: "The toughest job you'll ever love." She also trekked around the world filming Peace Corps volunteers at work and then converting the images into recruitment ads and used professional athletes to promote the Peace Corps in ads that aired during halftime of pro football and basketball games.

The Peace Corps needs to come up with some imaginative advertising like this today. Read the story at:


Documentary filmmaker, 71, dies
Spring Hill resident Winnie Kelley won an Emmy for her film on foster grandparents. But her career was promotion of the Peace Corps.

SPRING HILL -- During her college days at the University of Miami, Winnie Kelley was the beautiful star of campus theater productions and the varsity cheerleader who adorned more than one Orange Bowl float. Always, she seemed to be in the spotlight.

But it was the work she did behind the scenes, later in life, that earned her both an Emmy Award and a warm welcome at the White House.

Mrs. Kelley, who retired in Spring Hill after a career as a Peace Corps promoter that took her to swamps and deserts across the globe, died Friday (Nov. 29, 2002) after an extended illness. She was 71.

It was Mrs. Kelley who oversaw advertising for the Peace Corps during the 1970s when the volunteer organization began using the slogan: "The toughest job you'll ever love."

Zack Burkett, who worked at the Peace Corps' communications office then, is convinced the slogan was Mrs. Kelley's idea. "She was using that phrase before it was ever an advertising phrase," he said. "That's why I think it's hers. Just in working, I would hear her use it."

Mrs. Kelley trekked around the world filming Peace Corps volunteers at work and then converting the images into recruitment ads. She also used professional athletes to promote the Peace Corps in ads that aired during halftime of pro football and basketball games, said her husband, Bill Kelley. Mrs. Kelley's work producing a documentary about foster grandparents, A Touch of Love, earned her an Emmy. In addition, she produced spots for the same cause that used first lady Nancy Reagan as a spokeswoman.

The daughter of a commercial fisherman, Mrs. Kelley grew up in the Florida Keys and lived much of her childhood on a houseboat. Aside from leading cheers at football games, the tiny redhead -- she stood 5 feet tall and weighed 87 pounds then -- starred in an assortment of productions at the University of Miami, including some Shakespearean plays.

In 1947, Mrs. Kelley was the storyteller on a radio program in Miami called Unfinished Fables that let children come up with the endings.

After marrying, Mrs. Kelley auditioned and won a role as the local host of Romper Room television shows, first in Norfolk, Va., and then back in Miami. Kids knew her as Miss Winnie, said Paul Nagel, a friend of Mrs. Kelley's at the University of Miami.

Mrs. Kelley's first husband died, and she went back to school. Along the way, she gained experience in show production. Those skills, along with her writing talent, eventually led her to the Peace Corps.

"For 15 years, everything you heard about Peace Corps was Winnie's work," Burkett said.

Far from a "shrinking violet," Burkett said, Mrs. Kelley's personality was something closer to George Patton, the feisty World War II general. She could tell a raunchy joke and put out a bureaucratic fire with equal skill, he said.

In 1990, Mrs. Kelley was diagnosed with a terminal liver condition and given less than six weeks to live. Knowing her stubborn nature, friends doubted the prognosis. But just in case, Mrs. Kelley threw herself a going-away party. Soon, though, she regained strength and took a public relations job in Jacksonville with the Internal Revenue Service.

She retired to Spring Hill with Mr. Kelley in 1994. She also continued to edit her husband's film work, including a documentary on the restoration of the Green Swamp in Central Florida.

In recent months, she contracted double pneumonia and required the help of a respirator to breathe. Doctors hoped to wean her from the machine. But that proved futile.

Mr. Kelley said his wife hated goodbyes and did not want a funeral. Instead, she asked that her ashes be scattered over the mountains or the sea. Mr. Kelley will do both.

"She would probably accuse me of overproducing," he said.

Because she loved the Atlantic waters near the Keys best of all, she gave her husband some final stage directions for spreading her ashes at sea:

"Whenever you look at the ocean, all you have to do is wave and say, "Hi, Winnie.' Then the next wave you see cresting on the ocean would be her waving back."

STOP WAR . STOP KILL . ONLY PEACE .ONLY LOVE . ONLY WHITE

heloo
i am elmira fakharzadeh. i dont know how you recive my slogan.
i wonder alot when i see my name in your site.
i am graphic designer. i design poster about peace . if you want i send them for you.
thank you