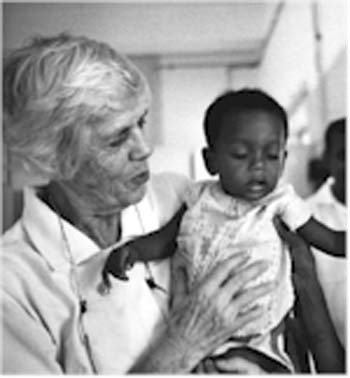 Read and comment on this story from 11 Alive of Atlanta on Jimmy Carter's preparations for his trip to Olso to accept the Nobel Peace Prize. In an interview he credited his mother, Lillian Carter, who volunteered for the Peace Corps at age 70 and served in India, as his inspiration in working for peace. Read the story at:

Former President Jimmy Carter is making his final preparation for his trip to Oslo, Norway this weekend. Carter will receive the Nobel Peace Prize for 2002 Tuesday.

Carter has been nominated many times, including 1978, 1995 and 1998. He is most known for brokering the 1978 Camp David agreement between Israel and Egypt.

Carter, however, said he was happy the Nobel Committee focused on his work with the Carter Center after the White House. He has promoted human rights and waged war against diseases like Guinea Worm in Africa though the Center.

Asked to define peace, Carter said, “I think it comes under the general umbrella of a lot of things: Freedom, democracy, human rights, environmental quality, the alleviation of suffering. So the totality of things that shape a person's quality of life, I think, are all beneficially impacted by the Nobel Peace Prize.”

Carter added, that, as far as he knew, neither nor any of his supporters lobbied the Nobel Committee on his behalf.

Carter’s inspiration in working for peace was his late-mother Lillian, who volunteered for the Peace Corps at age 70.

Asked if he thought she was proud of him right now, Carter replied, “Well, I'm sure she is proud of me right now. But she would have found a way to assure that I wasn't overly proud of myself.”

Expounding on his mother’s sense of humility, Carter recalled his 1977 inauguration when he walked his family down Pennsylvania Avenue.

“So immediately, all the news reporters gathered around my mother, and the first question they asked her was Miss Lillian, aren't you proud of your son?” Carter said. “And I was eager to hear my momma's answer, but she said, which one?”

This story has been posted in the following forums: : Headlines; Service; COS - India

I am most critical of your stand against President Bush; I think it would have been better if you had kept quiet.

I am in my eightieth year and during my lifetime I have never seen an American who liked war.....but we have no option at this time.

I consider myself to be a good Christian man just as you view yourself and I don't like to see lives wasted. I suggest that if you wish to save lives that you speak out against the Democratic Party's main "plank: abortion, for it kills more people than any wars ever could.