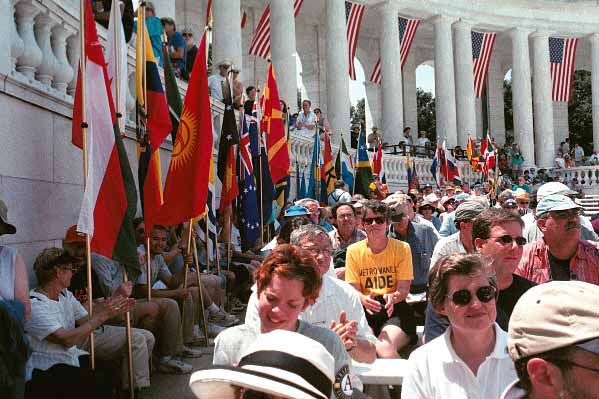 Read and comment on this exclusive story from PCOL on the cost cutting measures that the NPCA is taking to avoid a deficit this year.

The NPCA is facing a severe budget deficit as the year comes to a close. Last year the NPCA ran a deficit of over $100,000. This year, the organization has taken drastic measures to avoid ending the year at a deficit. The problem is not in the expenses that the NPCA expends to run its operation. Those costs have remained relatively constant over the years. The problem is that the money coming in is lower than in previous years.

Membership dues contribute about 30 percent of the NPCA's revenue. Grants from foundations and others cover about 20 percent of the NPCA budget. Another 35 percent comes from meetings, advertising and other fee-for-service ventures such as sales of Worldview magazine to the Peace Corps which distributes copies worldwide. The final 15 percent comes from contributions from individuals and groups.

While expenses have been kept below budget for the last three months, revenues have also been below budget. The NPCA originally projected $249,500 in revenues for the 4th quarter of 2002 and $257,500 in expenses. This would have left a final deficit of $8,000. But now it looks like revenues will be lower than expected leaving a larger deficit. The only way to avoid a deficit then is to cut operating expenses.

Causes of the Deficit

The NPCA has traditionally looked to the December fund-raising campaign for about one-third of its annual budget. Because of the NPCA's reliance on contributions, the organization traditionally has a cash flow problem on unrestricted funds at the end of the year. But this year, they are less certain of their ability to bring in the needed revenue in the December fund-raising campaign. Unfortunately, the economy as a whole might force many donors to cut back on their giving.

In addition, the NPCA expected foundation grants for Global Education that did not materialize. Staff turnover in the development department has resulted in a lack of continuity with prospective funders and some contributors.

This year at the 40th Plus One the NPCA's Board took the step of authorizing a dues increase of $10 bringing annual dues to $50 - $15 going to affiliate groups. However, the dues increase, voted in at the June President's Forum and Board Meeting, will not take effect until the first of the year.

Because of the NPCA's reliance on contributions and concerns they will be much lower this year, the organization has already taken steps to meet the shortfall.

Dane Smith and his staff are doing all they can to mitigate the cash flow problem. Anne Baker has voluntarily taken an unpaid leave of absence through January Dane Smith has reduced his own salary; the vacancy in GlobalTeachnet has not been filled. Advocacy Director Ed Crane's contract was terminated because the basic terms of the grant have been fulfilled and the remaining funds need to be reallocated to other advocacy expenses, but he is continuing to work on advocacy voluntarily while launching a job search. A position on the Development staff has not been filled. A plan to hire an editor for 3/1/61 has been put on hold till next year.

On the positive side, Joseph Permetti has agreed to become the Development Director on a permanent basis starting in January. The remaining staff, including publications Director David Arnold, Membership Director Emily O'Rourke, acting business manager Bruce Grogan, Database Manager Richard Corey, and consultants Jim Collins and Jackie Clarke have been covering the organization's programs and publications. And, as usual, the NPCA benefits from the pro-bono work of interns.

The GlobalTeachnet Committee, under the leadership of Angene Wilson, has pitched in to cover the Global Ed territory while Anne is on leave. The staff welcomes the participation of other interested volunteers in covering the work of programs, such as advocacy and membership.

Pat Reilly, Chariman of the Board of Directors of the NPCA said that "We actually expect to have no deficit at the end of the year because of the measures Dane has taken. We may even have a little left over. But the real concern is operating within our means. It will be a balance in operating cuts and boosting of our membership and donor base before we adjust to the new economic conditions."

The above actions are designed to head off the deficit. But even with staff cutbacks, they may not be enough. The NPCA needs the help of its members and groups to realize its goals of Global Education, Peace Building, advocating for our issues and preserving their network of Returned Peace Corps Volunteers and telling the world about the work of the Peace Corps. Here are steps that members and affiliates can do to help:

1. Make Your Gift Now. The Board is doing all it can to bolster the December fund-raising campaign. If you have not yet made your contribution for this year, please do so. If your COS or local RPCV group has money left over this year, consider contributing $500 or $1000 to the NPCA.


2. Remind all RPCV friends and acquaintances to renew their memberships. If you know RPCV's who can make extra donations, please encourage them to do so. If you know RPCVs who are not yet members, sign them up. Push those three-year memberships--the price goes up at the first of the new year.


3. The Board will approve the budget for 2003 this month and will discuss this further at its meeting on the first weekend of February. If you have comments or suggestions, let your representative on the NPCA's Board of Directors know about them.

This story has been posted in the following forums: : Headlines; National RPCV Organizations

I agree the career center money go to the NPCA. However, it should be funded properly and include all return volunteers including Separated Peace Corps Veterans. That's right, Pat, us too.

If not, I don't support it. No discrimination.

We would like to help in this advocacy with Congress. Perhaps, you could ask for the "Attorney for Volunteers" to liasion with the Agency so we don't have a 40-50 percent attrition rate and so on and so on.

I don't think the NPCA does that much for return Volunteer right now. Very Minimal. Hotline and Conferences. They have never stuck up for Veterans in need. That is my opinion.