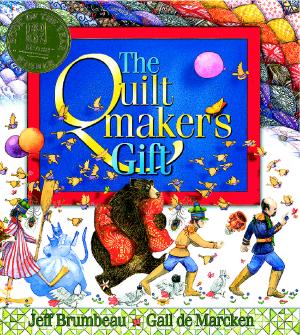 Read and comment on this story from Minnesota Sun Publications on Malaysia RPCV Gail de Marcken who, with her RPCV husband, has resided in eight different countries in Africa, the Middle East and Eastern Europe over the past thrity years. Now her talent and lifelong passion for art is pushing her in another direction: a new career as a book illustrator. She's the illustrator for "The Quiltmaker's Giift" which has sold more than 350,000 copies. Read the story at:

After a lifetime of travel and adventure as the wife of a career Peace Corps administrator, Gail de Marcken expected to retire quietly in her northern Minnesota home.

At 60 years old, however, her talent and lifelong passion for art would push her in another direction: a new career as a book illustrator.

This fall, Richfield’s Academy of Holy Angels Theater Department performed “The Quiltmaker and the King,” a musical based on the children’s book “The Quiltmaker’s Gift” written by Jeff Brumbeau and illustrated by de Marcken. It is de Marcken’s second book, she said, and it has succeeded far beyond her dreams.

“The Quiltmaker’s Gift” is about a generous quilt maker who helps a greedy king find happiness by giving his possessions away.

Originally published by Duluth-based Pfeifer-Hamilton and later by Scholastic, the book was on the New York Times bestseller list for a year. De Marcken said it has sold more than 350,000 copies, while a typical children’s book can usually expect to sell 10 to 15,000 copies.

“All of a sudden, I have a career,” de Marcken said. “I’ve taught art in different countries, but I’ve never really taken it that seriously. You don’t daydream the kind of success I’ve had.”

De Marcken’s new career follows a lifetime of adventure. After graduating from Richfield High School in 1960 – then as Gail Marcelius – and later the University of Minnesota, she served as a Peace Corps volunteer in Borneo, Malaysia. She later married one of her colleagues from Borneo, Baudouin de Marcken, who later became a Peace Corps staff member.

Over the past 30 years, they’ve resided in eight different countries in Africa, the Middle East and Eastern Europe. They raised three children, who are now grown, throughout their international careers.

Their lives overseas were filled with danger as well as adventure, de Marcken said. During one revolutionary war, they were forced to flea from their homes for their own safety. She also recalled one occasion in which she and her children had to lie flat on the floor in their home to avoid gunshots from a skirmish brewing in a nearby street.

Recently, Baudouin de Marcken retired, and the couple lives on a lake outside of Ely, Minn., on a piece of land they’ve owned for years and visited only over the summer.

“My kids always knew they were from Minnesota, but they never saw snow,” she said.

De Marcken’s life overseas has contributed to her art, she said. She’s drawn hundreds of African people, and much of the inspiration for her artwork in “The Quiltmaker’s Gift” was inspired by her last overseas home, Latvia.

She spent much of her preparation time in a Latvian church near her home. She then painted for 15 months to complete the project.

“The Quiltmaker’s Gift” has proved a success not only in book stores, but also in spin-off areas as well. In addition to the Holy Angels production, a professional production company performed the musical in Phoenix, she said. And there’s a line of fabric based on the book.

With her newfound career, de Marcken has built a studio on her northern Minnesota property. She has another book, “Miss Honeycutt’s Hat,” which will be released in February. The book is about a lady who runs around with a chicken on her head.

“It’s a lot of fun getting paid for drawing pictures of a lady with a chicken on her head,” she said.

In addition, Jeff Brumbeau is working on a prequel to “The Quiltmaker’s Gift,” and she is preparing to work on the art for that publication, she said. It will take her a year to create the illustrations, she said, and she would expect the book to come out in 2004.

De Marcken said she now reflects on her new success as an artist and wonders casually if she should have started her work earlier. But, she has no regrets for the choices she’s made for herself and her family over the years.

“We’ve had a great life,” she said. More about Gail de Marcken and her Illustrations 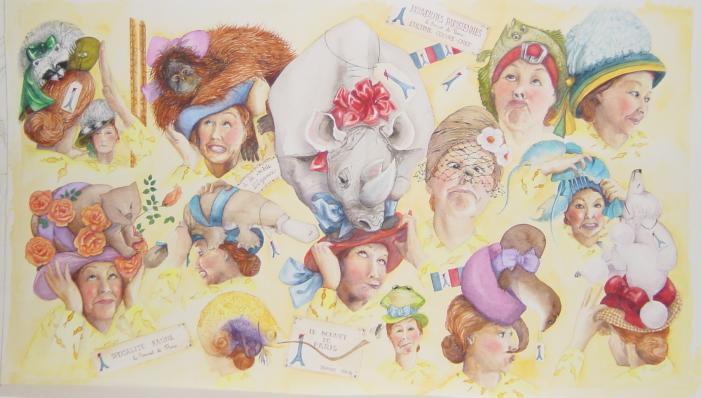 Read more about Gail de Marcken and her Illustrations at:

Gail de Marcken and her Illustrations

illustrator of The Quiltmaker's Gift and Born to Pull

I've just started illustrating a new story by Jeff Brumbeau, The Quiltmaker's Journey, that explains how the quiltmaker came to be.

In February I finished illustrating my second children's book by author Jeff Brumbeau entitled Miss Hunnicutt's Hat. It will be published in the Spring of 2003 by Scholastic Press.
Hunicutt painting Click on the picture to the left to see one of the Hunnicutt paintings. Here Miss Hunnicutt tries out some of the latest Paris fashions.

Prints from The Quiltmaker's Gift

I have had prints made of two paintings from The Quiltmaker's Gift. Each print is printed on 18” x 20 ” paper with the painting itself 13 ½” x 15 ½”. To see the two paintings that have been turned into prints, click here (bigger) and here (bigger) (the real prints look much nicer that these snapshots). The prints are signed and numbered fine art reproductions, each on museum quality watercolor paper using archival inks. They each cost $125, and I will donate two-thirds of the profits to Heifer International, an organization that uses donations to privide farm animals for poor families around the world. The prints are available now through the Kess Gallery of Ely, Minnesota.

Original paintings from The Quiltmaker's Gift

I can be reached through e-mail at gail@demarcken.org

This story has been posted in the following forums: : Headlines; COS - Malaysia; Special Interests - Art

To whom it may concern, My wife Ulla and I bought a painting off Gail De Marcken while I was a Peace Corps volunteer in Morocco in 1982. It is a watercolor depicting two young young boys riding a donkey through the narrow medina streets. If you have any way of placing us in touch with Ms. De Marcken we, would really appreciate it.