Experience of a peace corp volunteer by Uma Bhatt 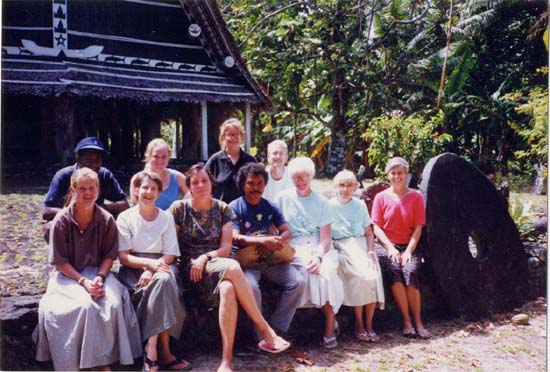 Experience of a peace corp volunteer by Uma Bhatt


Experience of a peace corp volunteer by Uma Bhatt

I was born in Bhuj Kutch and came to the US when I was 1 1/2 years old. I grew up primarily between Pittsburgh, Pennsylvania and Bethesda, Maryland. I attended the University of Pittsburgh as an undergraduate receiving a B.E. in Mechanical Engineering and a B.A. in Russian Language in 1983. I met my husband, David Newman, at Pitt, where he was a Physics major. We were married in 1983 and spent our honeymoon (1983-1985) in Kenya as Peace Corps teachers. Living in east Africa during the drought of 1983-84 sparked my interest in climate so I returned to the US and obtained a Ph.D. in Atmospheric Sciences from the University of Wisconsin. Presently, I am an assistant research Professor at the University of Alaska, where I do study climate variability with a focus on the higher latitudes.

I was a peace corps volunteer in Kenya from 1983-85 as a teacher in a rural secondary school in the western highlands. Before we (my husband and I served together) started our 2 years of service as teachers we had 3 months of fairly intensive Peace Corps training. Our training was absolutely fantastic. Nothing happened during those 2 years as a volunteer that I felt unprepared for and that says a lot. I think the quality of training depends on where your serve and in what sector. From speaking to other returned volunteers I have learned that training experiences vary considerably.

Most of the volunteers in my group (75 total) had just graduated from college with undergraduate degrees. We spent 6 weeks in a small town in Illinois (Mt. Carroll), where we bonded and received teacher training. We taught in a middle school in Mt Carroll where we gained experience as student teachers. We also learned about cross cultural training in the rural Illinios context since most of us came from urban or suburban areas. Then we spent 6-7 weeks in Kenya living at Iten, a boys boarding school. During that period we had intensive Swahili training (I think ~4-5 hours a day) in the morning and then cross cultural and Kenya specific teacher training the rest of the day. We were kept pretty busy during this period, but it was a worthwhile investment. At the end of this time I could hold a 'pseudo intellectual' conversation in basic Swahili. Swahili is a relatively easy language to learn and the vocabulary which borrows from Arabic makes it particularly easy for Gujarati/Hindi speakers.

We learned about how the Kenyan school system worked, about male-female issues, about when the students go on strike etc... Our experience was really wonderful but our training prepared us for the more difficult moments.

Our students were simply wonderful, highly motivated lovable kids. But towards the end of our 2 years they went on strike (various reasons which we knew nothing about at the time). They assembled as a mob at the headmaster's house after dark carrying sticks and stones. My husband and I walked over to them to try to reason with them (thye were already a mob and it was too late) and their response was 'racist South Africans go home' (apartheid was still alive in 1985). They knew how to push our buttons. It was horribly painful and would have been more of a shock had we not been told about mob mentality during training. I forced my husband to leave as they looked like we would shortly be the targets of their sticks and stones. We went home and the police arrived shortly afterwards. The students dispersed into the forest and the next day it was as if nothing happened. Over the next few months all of the students came and apologized and we quickly got over what happened.

I think training is critical for this type of exchange to be positive. Knowing what is acceptable in another culture and following this is critical. We had a fellow volunteer who was our nearest neighbor. She went one night to the local bar with her fellow teachers and it caused scandal. In the US we would think nothing of it but it turned out to be detrimental to her effectiveness and she eventually had to go to another school. It really teaches one to think before saying or doing anything.

My Peace Corps experience is something I can talk about indefinitely!

Photographs provided by Courteny Brown who served as Peace Corps in Kenya for two years from 1981 to 1983. To know more about his experience click at: http://www.courtneybrown.com/pcafrica/pcafrica.htm

This story has been posted in the following forums: : Headlines; Peace Corps Training; COS - Kenya