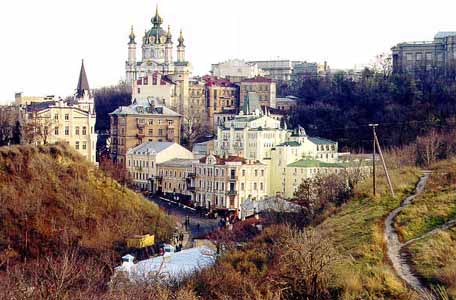 POLTAVA, Ukraine --- Matt has flown across the ocean four times to shop in this former Soviet country where standing in a bread line for hours only to find an empty shelf at the end is still fresh in the minds of most.

The Atlanta suburb resident isn't impressed when I offer to show him the shop on Lenina Street that just got a shipment of Pringles. Or the bus that could take us to the only place in town with dental floss.

Matt is doing a different kind of shopping. As he puts it, "picking up chicks."

It seems the only Americans to pass through the town called "the cradle of Ukrainian culture" fall into three categories: Peace Corps volunteers (like me), Morman missionaries and those shopping for a wife.

Shopping may sound harsh. But Matt came to meet three potential wives with three alternates --- just in case --- in a week. So I call it shopping.

Especially because another time he went to a "social" with 900 Ukrainian women looking for foreign husbands.

He says the experience made him feel like a piece of meat.

I asked him what he expected. What he wants. And if he really thinks he can find it in a week.

The 36-year-old businessman says he desires only two things: honesty and faithfulness. I don't believe him.

What if she has facial hair? OK, he concedes, three things.

Matt stresses while he "isn't a pervert" he is attracted to women who are about 25 --- and the age difference is more socially acceptable in Ukraine.

Plus, women in the United States are too much like men, he say authoritatively. They cheat. (Which is exactly what his first wife did.) So after checking out more than 900 Ukrainians and four trips to Ukraine why is he going home again without a wife?

Because they want your money and a ticket to America, I tell him. Did you really think you could find love in a meet-and-greet?

"I was hopeful," he says with a look of defeat.

I realize I have totally failed as an objective journalist, plus I lectured a source, so I better get more information. I beg my Russian tutor, Lena, to accompany me to a marriage agency, bribing her with a bottle of Mary Kay foundation.

As we walk in the snow to the agency, she tells me women looking for foreign husbands have padded her pocketbook. She teaches private English lessons and has gained a couple of students with new "pen friends."

One now lives in California, married to a man twice her age. Nina complains he plays poker every Thursday with his old friends, but she is enjoying checking out the shops with "five kinds of milk and all that."

"You want those things," Lena says a little sharply. "I don't think she was looking for happiness. She wanted a way out."

Things I take for granted --- a job that pays enough to survive on, my own apartment and maybe even a vacation every now and then --- are luxuries in Ukraine. And I can't imagine feeling the hopelessness I see in the eyes of some women here.

We can't find the agency, forcing us to stand on the street asking passersby directions. I get a taste of the humiliation women must feel walking in an agency.

(Lena warns my next Russian lesson will be a "kashmar" or nightmare.)

When we finally traipse up the three flights of stairs, through an unlit hallway and open the door, the agency is buzzing with activity. An impressive four computers --- one more than the Internet Cafe where I type this column and four more than the classroom where I teach.

A young woman wearing a fur coat with a pink rose runs around delighted over her latest love letter from a potential husband. An older woman works on a letter in the corner. Her daughter patiently waits next to her in her plaid primary school uniform.

The owner, Luba, begins with pictures. A woman sitting behind a beautiful candlelit dinner complete with wine in a mansion of a house. California, she tells me. Another in front of Disney World, ready to ride in the tea cup. Florida.

It looks exciting. And sounds so easy. Fill out a form with your bio and what you want. The men pick up most of the costs. (About $15 each time to send or receive letters.) Then the letters start rolling in.

Well, not always. The owner shows a picture of one of "her girls" wearing the crown she won in a beauty pageant. This one got no takers.

"Men are afraid of very attractive women," Luba says. "They want a wife, not a model."

Can't they find one in their own country?

Since 50 percent of the men are American, she focuses on them. They claim the American woman are evil. One man's ex-wife used to come in her office, take off her shoe and beat him over the head with it.

Women say all Ukrainian men drink too much. Many are divorced, left with no way to support their children.

As one woman put it: "They're past the flowers, sweets and love. Now they want something stable and material."

(However, the agency will arrange flowers and sweets to be delivered, for a small fee, of course.) And business is booming. This is one of four marriage agencies in Poltava, a city everyone calls "a big village" with a population of 325,000.

Woman are warned that the average age of the men looking to meet them hovers around 40 to 45. The younger women are usually just curious, the older ones don't seem to mind.

Yulia stops in the office for a letter, glowing like a woman in love. Sometimes she talks to her fiancee from Kentucky for four hours on the phone. The dress is ready. The visa approved.

Now she can't wait to meet the man who proposed to her on the telephone through a translator. He tells her he never thought he could fall in love with a picture.

At first, the 20-something Yulia was ashamed.

"I thought am I so bad I have to meet a guy via Internet," she says.

And what does her mother think?

She led Yulia to the agency by the hand. Her future son-in-law wants the mother to live in America to help with the children.

Mom has other ideas.

"She says 'I don't want to be a babushka yet. I want my own American husband,' " Yulia says with a laugh.

In Ukraine, she tells me, we say all the good ones are gone.

We say the same in America, I tell her.

The agency is just a year old, so it is too early to track long- term success of matches. But I consider myself an expert of sorts on homesickness in a foreign country with limited language skills and few friends.

"People fit and match properly," Luba assures me. "It's best when we got to Kiev, give a girl, leave and don't hear about anything. They don't need any help."

I can only hope she is right.

Christie Appelhanz is in Ukraine volunteering with the Peace Corps. Her column will appear each month in Prosper. She can be written at A/C 2, Poltava, 36000, Ukraine.

This story has been posted in the following forums: : Headlines; Third Goal; COS - Ukraine