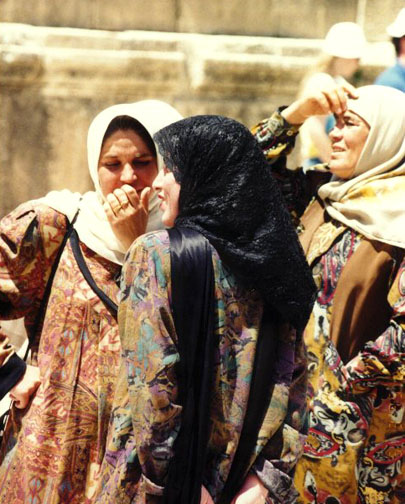 Jordanian Journal
To call Allison Freedman (SESP95) a stranger in a strange land does not even begin to describe her experience in the Peace Corps.

In 1997, she was among 29 volunteers in the organization's first group ever to be sent to Jordan. She was the only Jewish member of the delegation, sent to a country with a clear Palestinian majority, most of whom harbor deep-seated hostility toward Jews. The only people to know her true religious identity were fellow volunteers and Peace Corps administrators. She hid the fact from Jordanians she worked with and lived around.

Keeping the secret drained Freedman emotionally during her time in the country, but her service also uplifted her and gave her a deeper understanding of one of the world's most intractable conflicts.

"I certainly knew what the conflict was about, but I didn't really know anyone involved in it, so I had a really hard time being anti-anyone," says Freedman. "They were people, and I was going into the Peace Corps to help people."

Freedman worked at a school for the hearing-impaired about 35 miles south of Amman. She thrived there, enjoying the chance to use skills she learned in Northwestern's secondary education program. But keeping her religion concealed took its toll. At various times, all of the volunteers were accused of being Jewish. They faced pointed questions and frequent accusations. Freedman tried to avoid both, but eventually had to lie to protect her secret.

"I'm a really horrible liar. At first, it was kind of fun to make up these stories. Later, it ate me alive," she says. "I would hear people say some of the most gosh awful things, things that I couldn't respond to and still be an effective volunteer."

With less than a year remaining in her service, Freedman decided to leave. She wasn't alone. Of the 29 original volunteers, only half completed their two years. "I joined this apolitical, irreligious organization out to save the world, and I left for religious reasons," she says.

But the experience proved valuable. Freedman, now regional director for a Jewish Zionist youth organization in Denver, plans to write a book about her Jordanian journey. She also developed a perspective on the Arab world that's much different from most.

"There was no regret," she says. "I was so glad I did what I had done. I knew I would never have this experience again, learning about an Arab culture, being Jewish, but not having to do it as a Jewish person."

This story has been posted in the following forums: : Headlines; COS - Jordan; PCVs in the Field