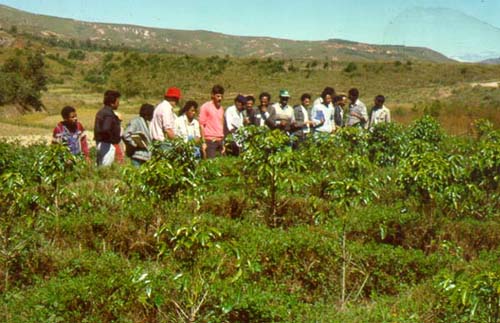 Slowing the Pace
Hollywood is not a place usually associated with the U.S. Peace Corps. But Tinseltown can loom large in the lives of volunteers such as Rebecca Arnold (WCAS93), a well-traveled young woman who recently began her service in Madagascar, an island off Africa's southeast coast.

"In the places I've traveled to, it seems that the image of American people has come from Hollywood movies, the media and music videos," says Arnold. "Especially as an American woman, to show up with that sort of precedent can make it difficult."

Arnold is typical of many recent Peace Corps volunteers. She's lived abroad twice, teaching English in Turkey and Indonesia under the auspices of a student organization that uses exchanges to foster global understanding and instill cultural sensitivity in future business leaders.

The Peace Corps offered "the two things I was looking for — an overseas living opportunity and the ability to add some value to the world," she says.

After leaving her job at a Chicago-area magazine publisher last October, she trained in Washington, D.C., and Madagascar for her job as a health-communications adviser, helping the Ministry of Health educate people about nutrition, immunizations, prenatal care and HIV/AIDS. She also studied languages (French, Malagasy and a local dialect called Tanosy), technical skills, cultural orientation and how to stay healthy. "My goal is no malaria," she jokes.

Another goal is to slow down the pace of her life. "I'm so glad to be away from television, from Hollywood movies, from all the things the American marketing machine tells you that you need to buy and can't live without," Arnold says.

This story has been posted in the following forums: : Headlines; COS - Turkey