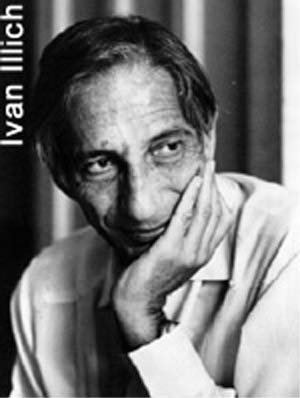 Read and comment on this obituary from Peacework of Ivan Illich, a former Catholic priest, philosopher, historian, theologian, social critic, and activist, who slipped away without much fanfare on Monday, December 2, at the home of a close colleague and friend in Bremen, Germany. Illich was a strong critic of the Peace Corps. He actively tried to dissuade American volunteers from going to Latin America to "help" the "poor." He pointed out that their good intentions would in no way cancel out the inevitable damage they would do by being "vacationing salesmen for the middle class American Way of Life"-a way of life not only unsustainable in the rich, overdeveloped countries but simply unattainable for the vast majority of people these programs were attempting to "help." Unwittingly, their interventions also "maintained or swept into power military regimes in two-thirds of the Latin American countries" and helped to open Latin America as a massive market for US goods and as a source of cheap labor. Read the story at:

Ivan Illich, a former Catholic priest, philosopher, historian, theologian, social critic, and activist, slipped away without much fanfare on Monday, December 2, at the home of a close colleague and friend in Bremen, Germany. The few obituaries that appeared pronounced him a has-been, a relic from the '60s and early '70s when his writings were briefly in vogue. However, this assessment belies his many important contributions toward a more modest, respectful, just, caring, humane, and peaceful society.

Illich achieved notoriety in 1961 when he opened a center in Cuernavaca, Mexico that served as the main training ground for missionaries and others bound for Latin America. The purpose of the center, eventually called the Center for Intercultural Documentation, or CIDOC, was deeply subversive though by no means secretive: to thwart the cultural imperialism and neo-colonialism inherent in such missionary initiatives as the American Catholic Church's "Alliance for Progress" and Kennedy's secular analogue, the Peace Corps. Illich actively tried to dissuade American volunteers from going to Latin America to "help" the "poor." He pointed out that their good intentions would in no way cancel out the inevitable damage they would do by being "vacationing salesmen for the middle class American Way of Life"-a way of life not only unsustainable in the rich, overdeveloped countries but simply unattainable for the vast majority of people these programs were attempting to "help." Unwittingly, their interventions also "maintained or swept into power military regimes in two-thirds of the Latin American countries" and helped to open Latin America as a massive market for US goods and as a source of cheap labor.

"The compulsion to do good," wrote Illich, "is an innate American trait. Only North Americans seem to believe that they always should, may, and actually can choose somebody with whom to share their blessings. Ultimately this attitude leads to bombing people into the acceptance of gifts." In response to such sarcastic criticism, Mich was beaten with chains and actually shot at-actions very likely orchestrated by the C.I.A. Fortunately, the assassination attempts failed. Clearly he had struck a nerve close to the center of power.

In the 1970s, CIDOC became a "thinkery" for broadening this sort of critique by examining the damaging side-effects of modern institutions in general. IIlich became even more radical, in the etymological sense of "getting to the root" of things. His conclusions were surprising, even shocking, to many, and certainly controversial. Like Gandhi before him, Illich was a caustic critic of industrial society. He saw dangers not only in the environmental degradation caused by the industrial mode of production but also in a type of social degradation due to an overabundance of services. His critiques of education (Deschooling Society), of the medical establishment (Medical Nemesis), of technocratic, technological society (Tools for Conviviality), of transportation systems (Energy & Equity), of the helping professions (Disabling Professions), of commodity dependence in a market-intensive society (The Right to Useful Unemployment), and especially of development (Celebration of Awareness, Church, Change, and Development, and The Development Dictionary, ed. W. Sachs) ruffled many feathers and earned him many detractors across the political spectrum.

Illich was one of the first to take note of the "paradoxical counterproductivity" of modern institutions when they reached a certain size and level of intensity. This resulted in schools that made people stupid, hospitals that made people sick, prisons that made people violent, high-speed transportation that created traffic jams and ever-increasing passenger miles, development agencies that created more and more "needy" people, and so on. Once institutions grow beyond a certain threshold, Illich observed, they end up thwarting the very purposes for which they were allegedly established. They tend to become dysfunctional and to incorporate other purposes that actually impede their stated objectives.

Illich decried modern society for becoming more and more machine- like, more automated, more sewn-up, more impersonal, more pervaded by "systems" of one sort or another. Such a society, he argued, cannot help but degrade friendship, love, care, community, hospitality, learning, dwelling, and, ultimately, the art of suffering and dying, by replacing all these human acts with ministrations of professional services, bureaucracies, systems, and techniques. He saw modern society as deeply violent in its essence and not just because of its frequent recourse to military intervention. Again, his words were radically surprising: " [T]he plows of the rich can do as much harm as their swords.

United States trucks can do more lasting damage than United States tanks." As before, Illich was critical of those who, perhaps with good intentions, sought to promote peace through economic development. "Development," he wrote, "has always signified a violent exclusion of those who wanted to survive, without dependence on consumption, from the environment's utilization values. Pax uconomica [or peace through economic development] bespeaks war against the commons."

In the latter years of his life, in the '80s and '90s, Illich moved away from his provocative, sometimes inflammatory critique of modern institutions to explore the historical question of how the mindset and social conditions that gave rise to these institutions came into being. No longer the political gadfly or rabble-rouser, he ceased to have entertainment value for the media and faded from public view. He now divided his time between Germany and Mexico (with short visits to the United States and elsewhere), leading seminars, lecturing, and writing. He once likened his historical method to the motion of a crab in flight: "The crab moves backward, while its popping eyes remain fixed on the object [it] flee[s]....

I want to explore what happens if I begin to move backwards, with my eyes fixed on the present." As a historian of the Middle Ages, Illich immersed himself in the past in order to see more clearly how radically different and unprecedented our modern times are from any past historical epoch. "And when I come out of the past and enter the present," he wrote, "I find that most of the axioms generating my mental space are tinged with economics."

From these explorations in the historical archaeology of ideas and perceptions came a number of books: Shadow Work, Gender, H2O and the Waters of Forgetfulness, ABC The Alphabetization of the Popular Mind, In the Mirror of the Past, and In the Vineyard of the Text. In these works, Illich examined various "certainties," "axioms," "necessities," or "needs" with which we live today, and he showed how each of them had an origin in history. And that which had a beginning, as Illich liked to point out, can also plausibly have an end. His historical perspective reveals that the certainties we take for granted today, such as the need for education, medical care, employment, literacy, transportation, markets, energy, police, prisons, news media, etc., were not always so certain.

His crablike journeys into the past serve to loosen the grip that modern certainties have on our perceptions and imagination. The institutional and political realities we live with today are thus neither immutable nor inevitable. This is Ivan Illich's message of hope in these dark times.

In his essays and lectures, Ivan Illich frequently made a distinction between expectation and hope. He once remarked, "I am very pessimistic but hopeful." He was also a man of deep faith. When asked by a student how he defined faith, Illich replied, "Faith is a readiness for the surprise. We must have a sarcastic readiness for all surprises, including the surprise of death." The lockstep, planned, predictable, mechanical aspects of modern society are thus more than just damagingly counterproductive; their raison d'etre lies in their attempt to wipe out and safeguard us from all the surprises in life.

The institutionalization of genuine human acts relieves each individual of the duty---expressed in virtually every religion-to love one's neighbor. It replaces hope with expectation through attempting to offer us something called "security." But for Illich, such security is an idol we worship at our peril. His life's work dares us to have trust and faith in nature, in our own senses, and in each other. There are no guarantees with such risky, foolhardy trust. But there may be surprises, both good and bad. Are we ready?

Aaron Falbel is a writer, farmer, and activist who for a number of years worked with Ivan Illich.

This story has been posted in the following forums: : Headlines; Obituaries; Criticism; Peace Building

Unlike Illich's "crab" we need not walk backwards, but perhaps look back with clearer eyes upon the wisdom of this not very famous man. Time has a way of identifying the true visionaries of this world, and I believe this man is one. What are we compromising when we strive for perfect health, perfect education, perfection in any form? It brings back that old commercial, "It's not nice to fool Mother Nature!" as she strikes down the fools who try.