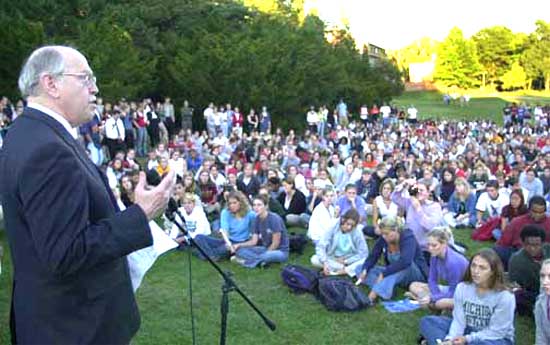 By Thomas A. Fogarty, USA TODAY

Peter McPherson, the new U.S.-appointed economic chief in Iraq, is a cigar-chomping Michigan farm boy who has parlayed hard work and a keen political sense into a string of successes in government, business and academia.

McPherson, 62, is taking a 130-day leave as president of Michigan State University to lead a team charged with revitalizing a long neglected Iraqi economy. The immediate tasks: revitalizing the finance ministry, the central bank and nationwide banking network. He'll report to Jay Garner, the U.S. civil affairs chief in Iraq.

Friends say McPherson, who wasn't giving interviews last week, is uniquely qualified for the task in Iraq by virtue of his deep experience in finance and international affairs. More surprising than his selection for the Iraq job, they say, is that he hadn't been tapped earlier for a top-level assignment in the Bush administration.

After earning a bachelor's degree from MSU, McPherson worked in the mid-1960s as a Peace Corps volunteer in Peru.

American University professor Tony Morella recalls McPherson as a politically active Republican when he taught him as a law student in the late 1960s. After graduation from the Washington, D.C., school, McPherson went to work at the IRS, where his specialty was international taxation. He joined the administration of fellow Michiganian Ford in 1975 as a White House aide.

Exiled from government by the election of Democrat Jimmy Carter, McPherson in 1977 went into private law practice. He returned to government for a series of high-level positions in the Reagan administration: chairman of the government's Overseas Private Investment Corp., administrator of the U.S. Agency for International Development and deputy Treasury secretary.

The Treasury post, where he was No. 2 to former secretaries James Baker and Nicholas Brady, marked the high-water mark of McPherson's government service.

His focus was trade, taxation and international issues, and he was the acting secretary between Baker and Brady.

He left government in 1989 to take charge of Bank of America's portfolio of debt owed by Third World countries.

McPherson seemed an unlikely choice when tapped 10 years ago to lead Michigan State University. He was an international banker in San Francisco laden with all manner of partisan political baggage. He was hardly the scholarly prototype for the presidency of one of the nation's largest public universities.

But three of four finalists for the president's job had withdrawn, and the MSU trustees were hopelessly split over hiring the fourth candidate. McPherson was the compromise candidate to whom the deadlocked board eventually turned.

Although not an academic, McPherson holds an MBA in addition to his law degree. And family ties helped to secure the job: All 10 members of his immediate family — parents included — held MSU degrees. "He brought a lot to the table as far as money management," says Lansing developer Joel Ferguson, vice chairman of the MSU board of trustees and the person most responsible for hiring McPherson.

Ferguson, a member of the Democratic National Committee and who opposes the war in Iraq, is unsure that the U.S. will achieve much success in arbitrating lingering deep divisions among the Iraqis. But, he says, any shortcomings in the U.S. effort won't be for a lack of effort by McPherson, whom he calls tireless.

Says Ferguson: "He doesn't golf. He doesn't play tennis. He reads and he works. That's all he does."

Married and the father of four adult children, McPherson is often seen around campus chomping on a trademark unlit cigar. Some years ago, McPherson reportedly struck a deal with one of his children to stop smoking cigars but couldn't completely wean himself.

As McPherson nears his 10th anniversary at MSU, he has become the longest-serving president among Big 10 universities. His supporters cite several elements to what they say is a record of success:

* Seven consecutive years in which tuition increases have not exceeded inflation.
* An agreement that now has the private Detroit College of Law operating from the MSU campus.
* A foreign studies program that MSU bills as the largest of any U.S. university. It sends 2,000 students a year to study in 50 countries.

Ferguson says McPherson has muted criticism from faculty members who would prefer a scholar at the helm by deferring to the provost on academics. Personal diplomacy seems to have allayed concerns of elected Michigan Democrats who may otherwise be troubled by his Republican Party ties, say Ferguson and others. "He's a political animal, but he's not a partisan animal," says MSU spokesman Terry Denbow.

This story has been posted in the following forums: : Headlines; COS - Peru; Iraq; University Administration; Economics