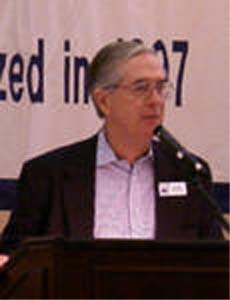 One year ago at St. Pete, I sat anonymously in the back of the room and listened to you describe the opportunities and challenges ahead. Two months later, I made those challenges and opportunities my own and found myself in the US SAILING office in Rhode Island. I?m here today to report on what we have accomplished in the past ten months.

President Rosekrans and I developed a ?fix it now? list very shortly after my arrival. The items on this list generally fell into the category of ?the house is on fire; put it out before you do anything else!?

Tops on the hit parade was to get control of our financials and financial reporting. US SAILING was budgeted to lose $146,000 (including Hullspeed) and the reality was much worse, around $240,000. We have wiped out almost $200,000 of that loss in ten months through careful cost control plus some new revenue and are currently projecting the loss at $55,000. I?m still hopeful we?ll get to break even before the year is over. Normally, I wouldn?t feel too good about just achieving break even but we had to come a long way in a short time here.

Simultaneously, we couldn?t very well manage our financials without a detailed and regular reporting system. For those of you who have had the misfortune to read my monthly reports, you know how important we have made this but the benefits are clear. We are still laboring under the archaic Macola software, which we hope to replace soon, so this is a special accomplishment by our Finance Director, Cindi Leary-Johnson and her hard working staff. And they had the additional challenge of trying to build a budget in the middle of a fiscal year change.

Putting out the fire is only a start. We also needed to build our business for the future and to put those building blocks in place rather quickly if we were to see any results in FY 2003.

We were in no position to hire new and expensive staff so we chose the creative alternative of charging the existing personnel with some important short term but critical projects through special task groups. An IT Task Group, chaired by Janine Ahmed, tackled the enormously complex issue of new software acquisition; another IT Task Group, chaired by Nel Roberts, focused on our daily data processing and web issues; a third Task Group, headed up by Lee Parks, has developed a complete human resource management package of salary comparability, performance review and a new employee manual; lastly, Lee was also in charge of the whole insurance RFP development. A very tangible outcome of this last item is a new insurance program being brought to General Services and the Board which will deliver better service to our clients and vastly improved sponsorship to US SAILING.

Beyond what our in place staff could accomplish, we chose to hire some highly talented people on a part time basis, in order to make them affordable. Dennis Dean came in from Denver to unscramble our membership database and reporting and is largely responsible for the new format you see in my report. Bill Placke has been putting in two days a week on space planning and possible outsourcing of our merchandise and publications. Jack Gierhart, a J 105 sailor from Marion, whom you will see here this week, has been working with me two days a week on marketing, specifically developing our message, inventorying our assets and helping with sponsorship. Randy Carnahan, formerly our contact with one of our insurance brokers, has been very valuable in guiding us through the mysteries of the RFP process. Jim Tomlinson has also been putting in two or three days a week from Wellesley on our software acquisition, with very positive effect. And Diane Walker from New Hampshire, who is also here with us this week helping Wanda, brings some valuable event management skills. So, not being able to afford these six individuals on a full time basis, we identified the key skills we needed and used them in the most economical manner possible.

With the fires out, we are now focusing our energies on non-dues growth from sponsorship, fund raising and new business. It is this growth which will permit us to invest in new programs and services. US SAILING has many assets, foremost of which is a marvelous corps of volunteers and it is vital that we support them and leverage their contribution in every way possible.

You should know that it is our dedicated and caring staff that deserves the credit for the progress we have made. I am grateful to them for their extra efforts.

The past ten months have been challenging but also satisfying. Even fun at times. It has been my privilege to serve you and the sport of sailing. And I look forward to realizing more of our potential in the coming year.

This story has been posted in the following forums: : Headlines; Sailing; Peace Corps Directors - Craw