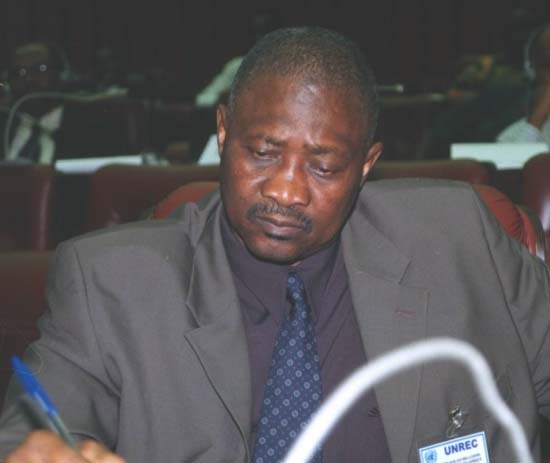 Read and comment on this story from the Associated Press on Mali's President who reently visitied Peace Corps Headquarters. Speaking in French through an interpreter, Toure praised Peace Corps volunteers for tackling health, education, agriculture and economic development projects in Mali. "The Malian people as a whole say thank you," Toure said. "Our top priority is to harness our potential so that Malians can have three meals a day and sell our surplus to other countries." Read the story at:

WASHINGTON (AP) -- Swept along in a colorfully clad entourage, President Amadou Toumani Toure of Mali thanked Peace Corps volunteers on Tuesday for serving in his country.

Toure, in town for a cultural festival, stopped by Peace Corps headquarters to receive honors for his country's 32 years of cooperation with the international community service program. Today, there are 180 Peace Corps volunteers in Mali, the largest Peace Corps contingent in Africa.

"One of the biggest Malian villages outside of Mali is in the U.S. -- it's made up of Peace Corps volunteers," Toure joked.

"The Malian people as a whole say thank you," Toure said. "Our top priority is to harness our potential so that Malians can have three meals a day and sell our surplus to other countries."

Peace Corps director Gaddi H. Vasquez praised Mali as a "culturally rich and infinitely fascinating country" that is also "one of Africa's strongest democracies." Vasquez said he hopes to send more volunteers to Mali in the future, saying the country "has always been one of Peace Corps' best partners."

Toure, along with many of his cabinet members and government officials, is in town to participate in the Smithsonian Institution's 37th annual Folklife Festival on the National Mall, which will highlight the culture and history of Mali and its connections to the United States.

This continent's relationship to Mali has not always been so generous. Malians were first brought to Louisiana through the French slave trade in the 18th century, bringing with them their skills in rice cultivation, cooking and textile production.

Mali today has a population of over 11 million. Under a 1992 constitution, the mostly Muslim nation has also been a multiparty democracy that prohibits parties based on ethnic, religious or gender lines.

Toure assumed a five-year term beginning in June 2002. "He's got what you'd call street cred when it comes to democracy and civilian control of the military and government control by consensus," said Daniel O'C. Hamilton, director of public affairs for the U.S. Embassy in Mali.

Toure said he hopes the festival will show Americans that "Timbuktu is neither a dream or a myth, but reality." Timbuktu, with 40,000 residents, is Mali's best-known city, once the hub of the Saharan gold and salt trade.

Mali is the largest producer of cotton in sub-Saharan Africa and a major exporter of gold and livestock.
Click on a link below for more stories on PCOL

This story has been posted in the following forums: : Headlines; COS - Mali; Peace Corps Directors - Vasquez

Ali Farka Toure died on Tuesday from a long struggle with bone cancer. I know many RPCV's love his music and would want to know. Truly, he brought Malian Music to America properly with his collaboration with Ry Cooder. He will be missed, his music is great.