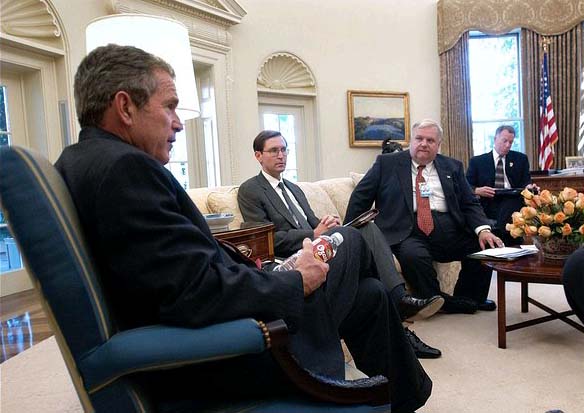 When Gale Norton was chosen as secretary of the interior, it was a controversial nomination. So she had to wait 10 days longer than almost all her Cabinet colleagues, until Jan. 30, for Senate confirmation. Only Attorney General John Ashcroft encountered more of a slowdown, getting his clearance on Feb. 1.

What Norton and President Bush could not have anticipated was that it would be another five months -- June 29 -- before the second presidential appointee at the Interior Department won approval. Until the Senate gave its advice and consent to the choice of Neal McCaleb as assistant secretary for Indian affairs, it was "home alone" for Norton, operating without a single political ally in any of the 16 other positions in her department requiring Senate confirmation.

Norton's situation is the extreme example of a serious problem: the slowness in filling the top ranks of government. The Bush administration is approaching its half-year anniversary with less than one-quarter of the 496 Cabinet and agency jobs subject to confirmation occupied by appointees of this president.

Bush acknowledged the difficulty last week, sending White House press secretary Ari Fleischer to the briefing room to complain of what he called "a growing confirmation gap." Fleischer used figures that lump judicial and ambassadorial appointments together with the policy-making jobs that are the heart of any administration.

Using that expanded list, Fleischer claimed that Bush had appointed more people through June 30 than any of his three predecessors, but had seen fewer of them confirmed.

He conceded that "the lag began even before the changeover" in control last month, when the defection of Vermont Sen. Jim Jeffords from the GOP put the Senate in Democratic hands. Anita Dunn, spokeswoman for Majority Leader Tom Daschle, pointed out that "we [Democrats] have controlled the Senate for only 3 1/2 weeks and during most of that time, a rules dispute kept committees from meeting. If they have a complaint," she said, "it is with their own party."

Seeking an impartial and expert perspective on the problem, I called Paul Light, who directs the Presidential Appointee Initiative at the Brookings Institution. Light highlighted this issue last year, well before anyone knew the identity of the new president or the makeup of the Senate.

He said the problem is "worse than ever," with "plenty of blame to go around at both ends of Pennsylvania Avenue." His latest tally shows that only 120 of the 496 Cabinet, sub-Cabinet and agency positions had been filled with Senate-confirmed men and women. Almost as many -- 118 -- had been nominated and were awaiting Senate confirmation. And another 37 choices had been announced by the White House but not yet formally submitted to the Senate.

At least 18 people have been waiting for Senate action for more than two months, but they are far outnumbered by the 55 whose papers did not reach the Senate until some time in June. Among the 221 positions for which no one has been named are such high-profile jobs as the directors of the Census Bureau, the National Institutes of Health and the Peace Corps.

Light told me that "the peaks and valleys" in the White House's pace of nominations have caused "a pig in the python" problem for the Senate, which struggles to schedule confirmation hearings for all the appointees. But he endorses Fleischer's criticism, saying senators have "a pretty sorry record" of moving nominations along.

Often, he said, nominees are left in limbo, unable to learn what has caused the delay, uncertain whether or when to move their families to Washington. Many of them have started in their departments as consultants, but until confirmed they can make no decisions, give no testimony to Congress, nor negotiate with state, local or foreign officials. Career bureaucrats -- who may or may not be sympathetic to the administration -- fill in temporarily.

The worst abuse in the process is the demand from some senators that the administration concede on a policy dispute before an official is confirmed. Democrats have placed holds on several appointees -- including Norton's deputy, J. Steven Griles, a hostage to the Florida offshore oil drilling controversy. But the most flagrant example is North Carolina Republican Sen. Jesse Helms's blocking four Treasury appointees, including Deputy Secretary Kenneth Dam, until he gets the change he wants in textile export regulations.

Unless the pace improves, Light said, Bush likely will not have all his top people in place a year after his inauguration, continuing a pattern of ever-slower staffing for every president since John Kennedy.

This story has been posted in the following forums: : Headlines; Peace Corps Directors - Vasquez; President Bush