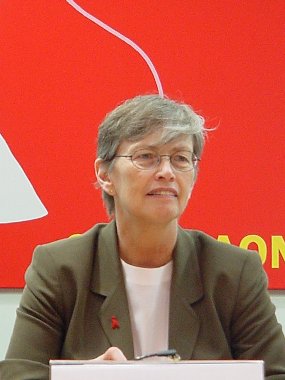 "I decided to join up right then," said Bellamy, who had studied to be a social worker. "I didn't tell my parents until I had been accepted. It was a shock to them, because at that time, the Peace Corps was new, and no one had actually come back from their two-year assignments. But, they accepted it, and I went to Guatemala."

Bellamy spent two years in the Peten region of that country running a school lunch program and broadcasting a radio show on health and diet in Spanish.

The gregarious, articulate Bellamy, 53, spoke about the Peace Corps of yesterday and today during a visit to Rice's Avery Lecture Hall in Herring Hall on March 30. The visit was part of a seven-city tour to spread the word about the Peace Corps, one of many tours Bellamy undertakes as part of her duties as director of the agency.

Speaking to about 30 students and faculty, Bellamy, the first of the Peace Corps' 140,000 "returned volunteers" to be named director of the 34-year-old agency, told the audience that volunteering for two years was the best experience of her life.

"I learned about success and how to handle failure," she said.

Thirty-two years after she joined the Peace Corps and after a long career in the political arena in New York and in investment banking as a managing director, Bellamy returned to lead the Peace Corps. She combines her management experience with her long-held belief that each individual can make a difference in the world.

In 1993, President Bill Clinton named Bellamy to head the Peace Corps, with responsibility for more than 6,500 volunteers in 94 countries and an annual budget of $231 million. The budget has remained constant for the past two years, meaning the agency operated on less, while the number of volunteers increased, she said.

While the basic principles of the Peace Corps have remained the same since the '60s, Bellamy said, the way the agency operates has changed with the times. New forms of assistance and development strategies have taken over as the geopolitical, economical and environmental landscapes of the world have shifted and evolved.

"For instance, we still work at the local level; we still train our volunteers in cultural sensitivity, safety and health, and more than 250 languages; but today we are working more in economic development and environmental preservation. We still have thousands of teachers, agricultural workers and health educators, but we are also looking for MBA's who can teach basic marketing techniques to business people in Eastern Europe and the former Soviet Union who are learning for the first time how to run their own business."

The Peace Corps is also the world's largest environmental entity, with more than 1,000 volunteers working on reforestation, waste management and pesticide reduction.

While changing political forces often dictate whether Peace Corps volunteers can safely operate in a country, Bellamy emphasized that the agency stays out of local politics.

"We work at the community level; our volunteers live in the towns and villages with the residents," she said, "and they are usually regarded as part of the community, so we seldom see any anti -Americanism."

She stressed that the safety of volunteers is at the top of the Peace Corps' concerns, and recruits are trained to minimize risks.

Although more than 90 percent of the Peace Corps' volunteers are college graduates, Bellamy pointed out that a degree is not a prerequisite to being accepted, and it is not just young people joining. The average age of volunteers is 30. The oldest current volunteer is 81, living in Hungary and teaching English as a second language.

Bellamy retains her enthusiasm for helping the world become a better place.

"We know we're not going to save the world by ourselves," she said, "but I believe each person can help. We are looking for motivated people who want to make a difference."