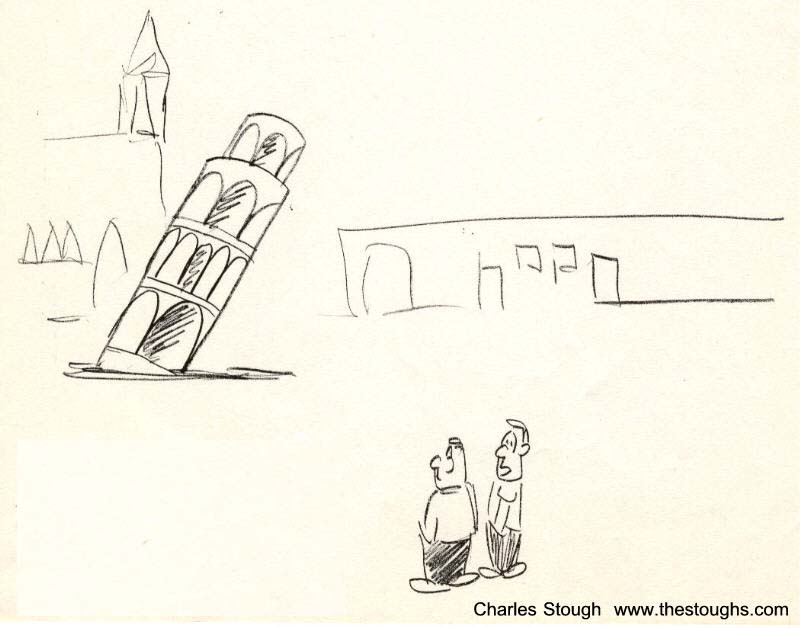 Who can come up with the funniest caption for this cartoon.

We'll post the original caption in next month's issue.

I think the guys in my village would have figured out how to keep that thing up straight.

And I thought the Pisa Corps was coming to help us out.

Thas whatcha get when a waka woman goes back to school for a degree in architecture.

So you are saying that if we were in a the other hemisphere the tower would be leaning to the left......

It was only two stories tall before the window washers arrived!

"It could have been worse" said Morris, the exiting volunteer, but deep down inside Morris knew he was just lying. Surprisingly what you saw was not reflected on Morris's resume' upon his return to the states.

"It looks all right to me."

"After the Pizza fiasco, the architect was disgraced, driven from his homeland, wandering the earth to beg for his bread. Then he happened upon this place, met a beautiful widow, married into untold wealth and became the leader of the community; a man of power and ambition, he saw his chance at redemption and he grasped his final chance of eternal glory. He built another tower and this was to be his masterpiece."

Now son, I admire your ambition, but...