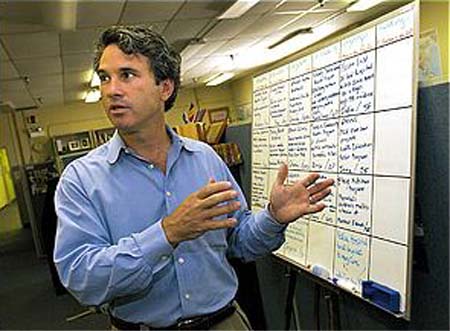 Direct Relief International President and CEO, Thomas Tighe, is cited in a 2002 Nobel Peace Prize Nomination. The nomination of the Peace Corps and the National Peace Corps Association submitted to the Nobel Peace Prize Committee at The Norwegian Nobel Institute was signed by a group of ten members of the United States Congress. The nomination describes the mission and achievements of the Peace Corps and cites 11 current and former volunteers and staff as some of the world’s most effective peacemakers who are carrying on humanitarian efforts around the world.

According to the nomination letter, Returned Peace Corps Volunteers in the NGO world include Carl Pope, executive director of the Sierra Club, Jonathan Lash, president of World Resources Institute, and Thomas Tighe, president of Direct Relief International. US ambassadors, such as Frank Almaguer, Johnnie Carson, David Greenlee, and many others, gained their international perspective through Peace Corps service.

The Peace Prize laureate is expected to be announced on a Friday in mid-October and the 2002 award ceremony will take place on December 10, the anniversary of Alfred Nobel’s death in 1896. There are only six categories of affiliation internationally who are entitled to nominate candidates for the Peace Prize, including members of national assemblies and governments. A five member Peace Prize Committee is responsible for the direct evaluation of nominations, while a group of advisers review the qualifications of the candidates whom the committee has found most suitable.

The 2001 Nobel Peace Prize was divided equally between The United Nations (U.N.) and United Nations Secretary-General Kofi Annan for their work for a better organized and more peaceful world.

"The Peace Corps stands for the simple, pure notion of individual Americans helping improve living conditions and build a peaceful world through people-to-people efforts," said Thomas Tighe, CEO and President of Direct Relief International. "It is an honor to be mentioned in the company of the distinguished returned volunteers who continue to pursue this work with the unmatched insight and inspiration that the Peace Corps provides."

Tighe served as a Peace Corps volunteer in rural Thailand from 1986-1988, after completing law school and being admitted to the California State Bar. Tighe came to Direct Relief International in October, 2000 from the Peace Corps Headquarters, Washington, D.C., where he served as Chief-of-Staff and Chief Operating Officer from 1995 -2000. In that role, he was responsible for the day-to-day management of the Peace Corps' worldwide operations, involving more than 7,000 volunteers in 72 countries and an annual budget of $250 million. During that period, the Peace Corps experienced a resurgence of interest and growth to the highest volunteer levels in 27 years. He negotiated agreements to establish new programs in South Africa, China, and Bangladesh, and directed a revamping of the agency's organizational structure and business systems. In 1998, Congress recognized the improvements and approved for the first time ever a 4-year authorization for the Peace Corps to expand the Peace Corps to 10,000 volunteers. Tighe traveled to 40 countries, including China in connection with the Presidential Summit in 1998 and the trip of the Vice President To South Africa in 1995, during which bilateral agreements to establish Peace Corps programs were signed.

Tighe also served two years as Associate General Counsel of the Peace Corps under Director Carol Bellamy, also cited in the Peace Prize nomination, now Executive Director of UNICEF, handling the legislative and funding issues, international agreements, health and employment issues. Tighe was raised in Palo Alto, California, is a graduate of the University of California, Berkeley, and the U.C. Hastings College of the Law in San Francisco.

This story has been posted in the following forums: : Headlines; NGO's; Service; COS - Thailand; Awards