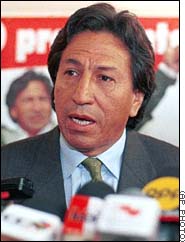 Peruvian President Alejandro Toledo Manrique will deliver the keynote address to officially open the 40 Plus One anniversary conference of the Peace Corps at 9 a.m., June 21 at the DAR Constitution Hall, 18th and D Streets, NW.

President Toledo has been a friend of the Peace Corps since early Peru volunteers stayed with his family in the 1960s. He will be introduced by two of those volunteers, Joel Meister and Nancy Deeds Meister, said Dane Smith, president of the National Peace Corps Association, sponsor of the conference/reunion that will last through Sunday.

"The participation of President Toledo testifies to the enduring legacy of Peace Corps volunteers in 135 countries around the world," Smith said. "We are pleased he could be with us to share his personal and his country's ties with Peace Corps." More than 1,600 returned volunteers have registered to participant in the conference.

Other speakers at the opening ceremony will include current Peace Corps Director Gaddi Vasquez. Karen DeWitt, a writer who was an ward- winning ABC news journalist and former volunteer in Ethiopia, and Jason Carter, grandson of President Carter, great grandson of India volunteer Lillian Carter and recently returned South Africa volunteer, will be the emcees. Carter is the author of "Power Lines: Two Years on South Africa's Border."

NOTE TO ASSIGNMENT DESKS: The press entrance will be on "C" Street, NW. Doors will open at 7:30 a.m. Toledo is due to arrive at 8:30 a.m. at the 'D' Street entrance. He will be accompanied by two returned volunteers from Peru who lived with the Toledo family in the 1960s, and will be met by leaders of the NPCA.

Other conference events include:

-- An all-day business symposium at the Omni Shorehan Hotel Thursday, June 20, on "Building and Sustaining Competitive and Socially Responsible Businesses." Levi Strauss & Co. Chairman Robert D. Haas will deliver the opening speech at 9 a.m. and at noon, Sandra Jaffee, executive vice president of Citibank, will speak. Haas was a Peace Corps volunteer in Ivory Coast, while Jaffee served in Ethiopia.

-- A Global TeachNet program from 10 a.m. to 3 p.m. Thursday at the Coverdell Peace Corps Headquarters, 1111 20th St., NW in which 60 elementary and secondary school students will be sworn in as honorary Peace Corps volunteers by Karen P. Hughes, counselor to the President.

-- More than 35 workshops and forums on international issues, to be held Friday afternoon and Saturday at the Omni Shoreham Hotel, 2500 Calvert St, NW, Washington.

-- A ZooFest with international dance, music and documentary films, along with environmental demonstrations, at the National Zoo, from 9 a.m. to 4 p.m. Saturday. Returned Peace Corps volunteer Stephanie Palau, who served in St. Lucia and Ecuador, will arrive at the zoo about noon finishing a 5,000-mile bike ride to Washington from San Diego.

-- A multi-cultural forum at George Washington University at 9:30 a.m. Saturday.

-- A Salute to Peace Corps Giants Sargent Shriver, C. Payne Lucas of Africare and returned Malaysia volunteer Marge May of Allentown, Pa., hosted by Bill Moyers, at 6:30 p.m. Saturday at the Omni Shoreham.

-- A procession from the Lincoln Memorial to Arlington National Cemetery and closing ceremony at the cemetery's amphitheater, 9 a.m. to noon, Sunday, with speeches by Rep. Christopher Shays, a Fiji volunteer; National Teacher of the Year Michele Forman, a Nepal volunteer; and former Senator Harris Wofford, an early Peace Corps leader.

-- A Peace Corps family picnic and games, noon to 4 p.m. at the ball fields at 23rd and Constitution.

The National Peace Corps Association is the alumni organization for returned Peace Corps volunteers and staff.

This story has been posted in the following forums: : Headlines; COS - Peru; NPCA; Fortieth plus one