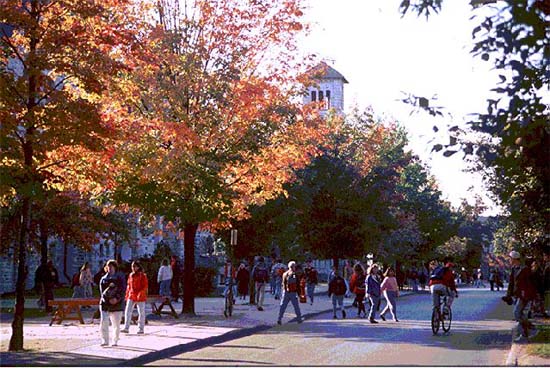 "Post-Sept. 11 feelings of making the world a better place have caused many people to apply," said Garcia.

"President Bush proposed to double the Peace Corps within the next five years during the State of the Union address on Jan. 29."

Garcia said since Jan. 29 there has been a 70.52 percent increase in new visitors to the Peace Corps website and applications have increased by 16.03 percent.

Beeson said returned Peace Corps volunteers feel there are both pros and cons to Bush's request for an increase in volunteers.

"Peace Corps volunteers do not want to be associated with any information-gathering activities. We are serving in countries to help people, not to gather information."

Beeson said many people are under the misconception that it is not difficult to join the Peace Corps because it is a volunteer organization.

"Only about one in five people who apply to the Peace Corps are actually admitted. It is far more competitive for people with liberal arts degrees to be admitted than people with business or agriculture degrees," Beeson said.

Beeson served in the Peace Corps from 1971-1981 in Swaziland, a country in South Africa. He is now on the board of directors for the Friends of Swaziland and is a member of the Oklahoma Returned Peace Corps Volunteer Association.

"I have always said that the Peace Corps will not put you in the oven, but they will put you close enough to feel the heat," said Beeson.

Beeson said most of the Peace Corps volunteers who have lost their lives while serving died in automobile or motorcycle accidents.

Garcia said, the Peace Corps only enters friendly countries which have extended an invitation to the agency to start a developmental program.

"An Assessment Team looks into the safety and security of the region before the Peace Corps will accept the invitation," said Garcia.

"All countries are equipped with a Peace Corps office that has a trained staff who monitor the volunteers."

Sarah Powers, biology senior, plans on applying for the Peace Corps after graduation.

"I think that you run just as much of a risk serving in the Peace Corps as you do walking across campus," she said.

"Accidents can happen anywhere and you shouldn't let that stop you from making a difference in the lives of others."

"A volunteer serving in Singapore was held hostage for a week and she said the only thing she was worried about while being held captive was being caught in a crossfire," said Beeson.

"Her captors never harmed her because she was a member of the Peace Corps."

Garcia said, "Locals appreciate volunteers who choose to live among them, not behind some embassy wall. They respect that volunteers are willing to live a modest life to help develop their communities."

Glenn Freeman, UCO International Student Advisor who applied for the Peace Corps, said, "The Peace Corps is very much still a worthwhile administration and it is aware of the precautions that need to be taken in order to protect its volunteers."

About 97 percent of all Peace Corps volunteers have a bachelor's degree, but it is not required. Volunteers are placed in countries where their skills are most needed.

Peace Corps assignments last two years in addition to 12 weeks spent in training. Volunteers are trained in the country where they will be serving by Peace Corps staff. Volunteers are taught everything from personal safety to an emergency evacuation plan.

Beeson said, "I am sixty-eight years old and my time spent serving in the Peace Corps was the most rewarding thing that I have ever done in my entire life."