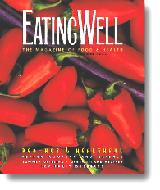 Elegant EatingWell magazine returns; so does its integrity

EatingWell is back. For those of us unaware that it had gone anywhere, or what it was in the first place, EatingWell is a magazine.

Launched in 1990, its target readers were what the publishers estimated were 77 million aging baby boomers with the means to give dinner parties but suddenly conscious enough of their mortality to worry that a rich soufflé might be their last.

EatingWell would take the fashionable dishes of the day and put them through a nutritionist's sieve. There would be stories about the food industry and feverish food politics of the day. It would be the thinking hypertensive's alternative to the glossy Cooking Light.

Turning counterculture instincts to a diet magazine for the ascetic intelligentsia was the idea of James Lawrence, a journalism major out of Cornell and Syracuse universities and a former Peace Corps volunteer.

By the late 1980s, Lawrence was a Vermont-based publisher of several lifestyle periodicals. EatingWell was developed just as the Canadian publishing group Telemedia purchased 85 percent of Lawrence's company. The "charter issue" certainly had attitude. The typeface was a stylish spin on Rolling Stone Roman. There was interesting white space along with Magritte-style illustrations and a formidable procession of writing and cooking talent, including chef Rick Bayless and authors Martha Rose Shulman and Darra Goldstein.

There was a visit to Robert Mondavi's kitchen, and a cracking piece of reporting traced a rockfish caught in the Pacific then sold as a red snapper in Des Moines, Iowa, eight days later.

The magazine was decreed groundbreaking and sophisticated by the national media.

As the months rolled on, the prominent names kept coming. Corby Kummer celebrated Alice Waters and authentic French cookery. The magazine aimed at money. There were glossy ads for dream kitchens.

But look closely, and the theme was using those deluxe rooms to drain the fat out of food. Yogurt was never simply yogurt, but always low-fat or nonfat versions.

By November, the magazine was carrying recipes for eggless mayonnaise, reinventing trifle with skim milk and cornstarch, and promoting a dehydrated egg substitute called "EggZact."

But these were strange times, and the formula was working.

Vanquishing calories was a politically correct activity, good housekeeping was suddenly a cause.

However, as successful as his magazine was, trouble arrived for the founder within six months.

"There was a shake-up at the top of Telemedia," says Lawrence. "I was soon invited to leave."

But the staff stayed, and the magazine carried on much as he had envisioned it for the next five years, he says.

Calculating how many copies got passed along, total readership was estimated at 3 million.

But this was still far from Cooking Light's 9.2 million. In 1997, a merger put the New York publishing group Hachette-Filipacchi in charge of EatingWell.

From original to imitator

By April 1998, the old Rolling Stone Roman, interesting white space and big-name authors were gone. The magazine was no longer an alternative to Cooking Light, but a thin imitation. A cover done in lime green and pink shrieked, "Lighten up!"

Inside, the lighteners were in overdrive — readers were offered smoked turkey breasts for Easter brunch. A soufflé, described as a "puff," called for nine eggs, but threw away seven of the yolks. There were "creamless" cream soups. Caesar-salad dressing was approximated with low-fat cottage cheese and nonfat plain yogurt.

The new managers wanted young readers, says food editor Patsy Jamieson. This was not a logical audience for a magazine dedicated to careful eating, she contends: "Young people still eat out a lot; they still think they're invincible, still bulletproof."

By 1999, EatingWell's ad sales were down, the readers ages were up and Hachette-Filipacchi folded the magazine.

But it was not quite dead.

Early in 2001, Lawrence found the rights to EatingWell on the market as part of an Internet kitchenware company. He bought them and gathered a few of the original staff — including Jamieson — to resurrect the magazine.

This time, it would be quarterly. There would be no large corporate partners, no ad agencies, no advertisers offering dream kitchens. A skeleton staff worked six months for free. At launch, the old staff of 60 was down to about 15 people, and the magazine that reportedly cost $12 million to develop in 1990 has been resuscitated for $750,000.

The new issue, labeled "Vol. One, Number 1," is now arriving in stores — not to newsstands, not the kind with cigars, says Lawrence, and not airports, but in bookstores and health-food shops.

The old design flair is back, but in updated, elegant versions. There are features on portion sizes, about chili peppers, eating in Greece, veggie burgers and summer sorbets.

The intent, says Lawrence in the editor's introduction, is "to publish a magazine with authority, integrity and — at the right moments — an editorial funny bone."

This story has been posted in the following forums: : Headlines; Food; Eating; Journalism; Magazines

Please contact me because i amvery interested in your website, i wish to recieve updates via email if that is possible. =)p.s anybody who wants to talk to me, just add me on msn. thanks